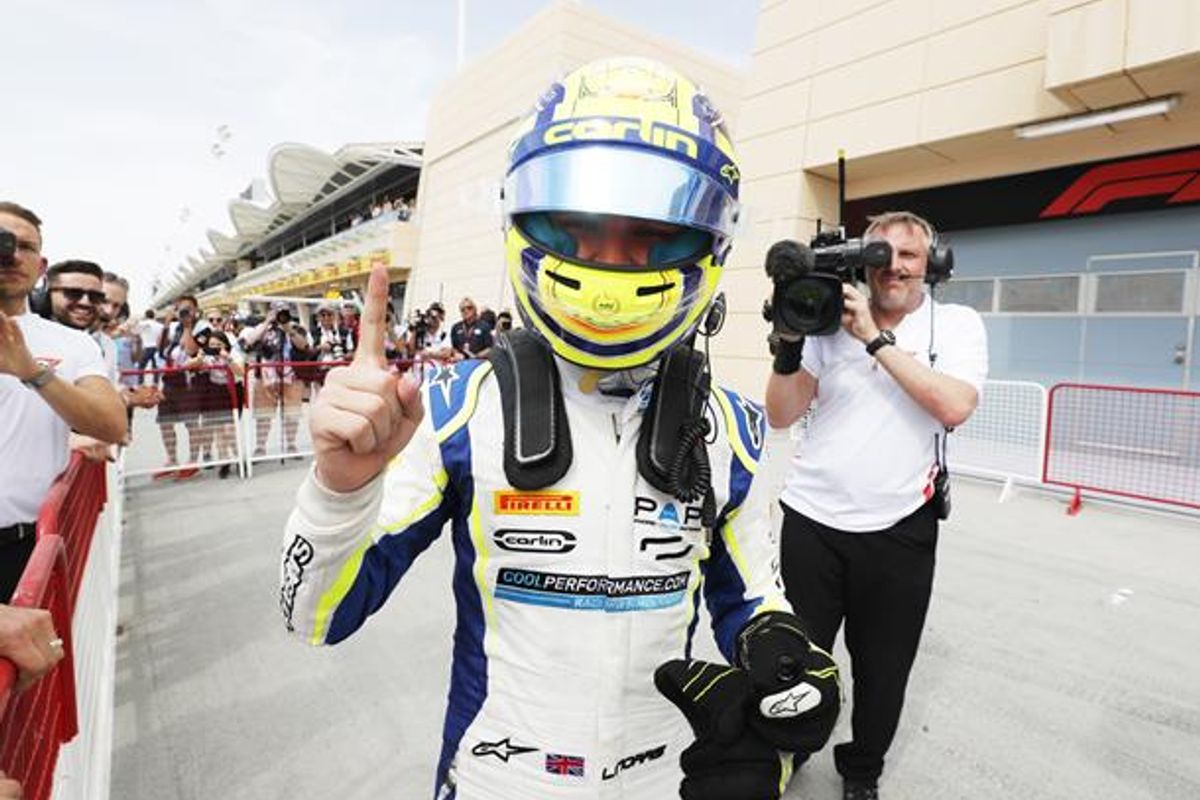 Lando Norris secured his first FIA Formula 2 Championship victory in the Feature Race at Sakhir, Bahrain, mastering the hot and windy conditions to win with an 8.3s advantage over Carlin teammate Sergio Sette Camara, who held onto second place after a thrilling battle in the final stages of the race with RUSSIAN TIME’s Artem Markelov, the latter producing a spectacular recovery drive to secure the final podium position.

With the majority of the field, save from the Trident team, opting to start on the medium-compound tyres, degradation was a hotly anticipated factor in the race. An aborted start was called at the beginning, as Markelov and MP Motorsport’s Roberto Merhi stalled on the grid and prompted a second formation lap; the Russian then took to the pits to restart from the back of the field while the Spanish driver retired from mechanical failure.

At the second time of asking, Norris made a fantastic start to streak clear of the rest of the field, while Sette Camara took advantage of a slow start from George Russell to catapult himself into second. Russell, starting from the front row, also lost ground to a fast-starting Nyck de Vries and Nirei Fukuzumi, resulting in a scintillating scrap among them in the early stages of the race.

De Vries soon put a move on Sette Camara to grab second, allowing Norris to scamper off into the distance at the rate of a second per lap. Further behind, Alexander Albon surged past Russell and subsequently did battle with De Vries and Sette Camara, the latter of whom ultimately won out for second as the Dutchman began to drop back.

Seemingly unflappable in the lead, Norris had the luxury of not needing to react to the others once they’d begun to make their stops. Louis Delétraz opened proceedings among the top ten on lap 14, with Russell blinking a lap later – staying ahead of the Swiss driver. Sette Camara and Albon came in together later on and dropped behind Russell as they rejoined the track.

Meanwhile, Markelov was charging forward, having dispatched the majority of the field with a flurry of well-timed passes into Turn 1, and continued to carve through the pack after his own stop on lap 16. Norris switched to the soft compound two laps later, continuing with the lead on his return to the track as the pair of Sette Camara and Albon returned to second and third after clearing Russell.

Markelov also passed the British driver, with third-placed Albon next on his radar. Once more, the Russian used his DRS to blitz past at the first corner and, although the Thai driver fought back across the next few corners, the Renault development driver held firm to secure third.

In the final five laps, Norris started to lose fractions of his 10 second lead to his teammate, who was simultaneously under attack from Markelov. The Brazilian was inch-perfect in his defence of second when Markelov approached, orchestrating an excellent switch back manoeuvre at the start of the final lap to hold second.

Norris took the chequered flag after a seemingly untouchable performance, walking away with an impressive 31 points with pole, win and fastest lap. Sette Camara and Markelov’s battle for second delighted the crowd up to the line ahead of Albon.

Russell kept fifth having lost ground to the front four, as Nyck De Vries completed the top six having fallen out of contention in the midway stages. Sean Gelael converted an early pitstop into seventh place from P19 on the grid, as Maximilian Günther, Jack Aitken and Ralph Boschung all battled hard to end the race in the top ten.

Günther begins tomorrow’s Sprint Race from reverse-grid pole, and will start alongside Gelael as Norris will seek to win the second race of the weekend from eighth.