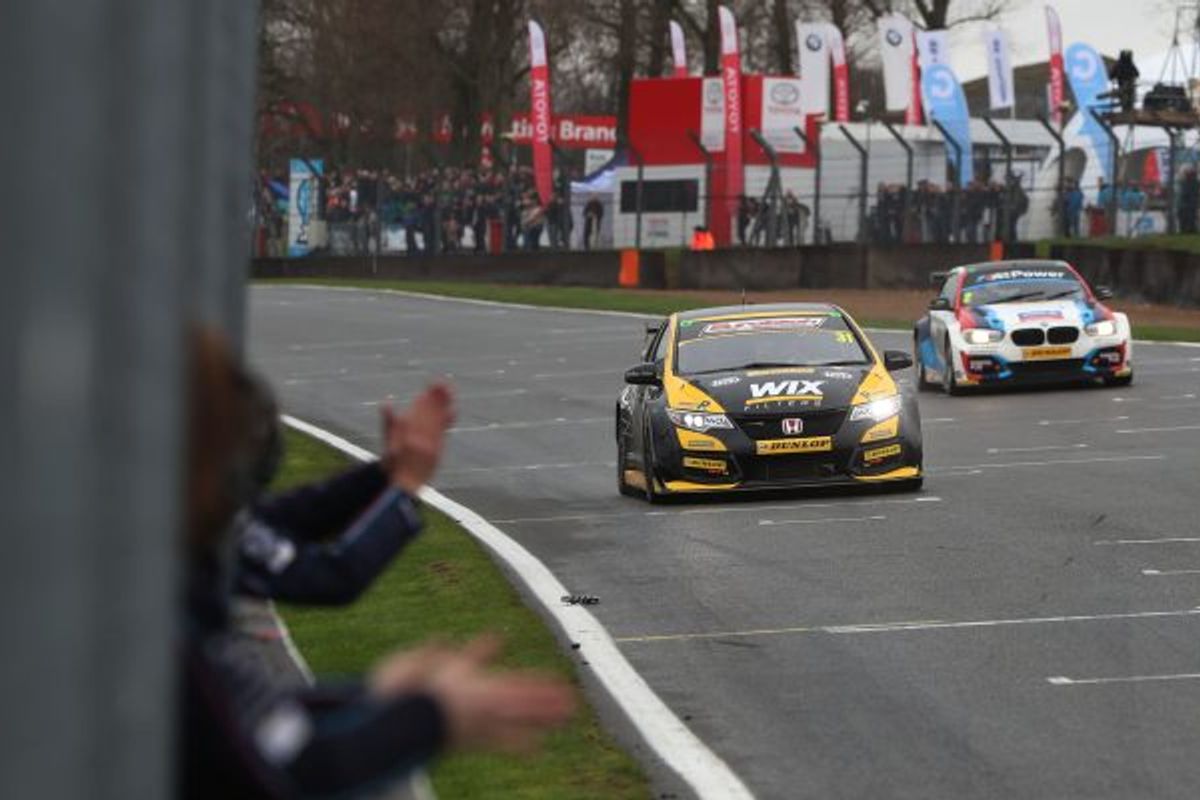 Pole Position man Jack Goff won the opening round of the 2018 Dunlop MSA British Touring Car Championship after fending off Team BMW’s Colin Turkington in a near race-long duel at Brands Hatch.

Drama struck as Tordoff continued to tumble down the order, creating a concertina effect in the lower half of the top ten. A slight touch between Tordoff and Matt Simpson’s Civic Type R through Surtees caused further unfortunate contact with Matt Neal’s manufacturer-backed Honda behind. Tordoff and Simpson were immediately fired out of the race, whilst Neal suffered damaged steering and went straight on at Clearways. With the three cars left stranded off-track the first Safety Car of the season was deployed.

Rob Austin’s Alfa Romeo was next to fall foul of contact shortly after the restart as a nudge between him and Tom Oliphant’s Mercedes left the Italian car with broken rear suspension.

As the race wore on in wet conditions it was Cammish’s Honda and the two Team Shredded Wheat with Gallagher Ford’s of Tom Chilton and James Cole that seemed to be struggling for ultimate pace.

Jordan had already regained third as Cammish fell further behind the charging Tom Ingram and Chilton, with the latter hanging on well in fifth.

Turkington’s biggest chance to claim the win came on lap 14 of 27 as he pulled almost side-by-side with Goff through Clearways. The Eurotech driver hung on and was able to fend off Turkington’s advances for the remainder of the contest.

“That was the perfect start to the season for WIX Racing with Eurotech and all our amazing sponsors – we’ve all been working flat-out behind-the-scenes over the winter, and if we can end the season in the same position I’ll be well happy!” said Goff. “It was extremely greasy out there – the last corner in particular was like an ice-skating rink! Colin had better traction out of Clearways being rear-wheel drive and we had a little rub on one occasion, but he’s a very fair driver and we came out fighting. It’s such a competitive field out there, so to emerge on top of the pile when everyone is on zero ballast means a lot to us.”

“It’s an excellent start to the season compared to this time last year where I got 50 yards off the line!” responded Turkington. “I had the wise words of Dick Bennetts (WSR Team Principal) ringing in my ear, saying just get it home and get the points on the board – it’s a long championship.

“It’s a great start for West Surrey Racing and for Team BMW. There were a couple of chances to get Jack (Goff). I could get my nose up the inside into Clearways but it was very slippery there. I was pushing to the end and I was just conscious of not taking too many risks. Jack’s pace was just better in the last three laps when it dried a bit.”

Jordan took a lonely third ahead of Ingram and Chilton, whilst Mac Tools with Ciceley Motorsport’s Adam Morgan impressed with sixth.

“It was a good race but a hard one in these conditions,” noted podium man Jordan. “I made a bit of a mistake at Druids on lap one which allowed Dan (Cammish) past and that meant I lost touch with the two leaders. The car was really good, I had good pace after I got past him. I’m really happy to start with a podium for BMW Pirtek Racing. It’s my 300th race next. It’d be great to go and win it. I’ve been here 11 years and I’m still only 28. I’m privileged and proud to be here.”

Arguably the most eye-catching display came from reigning champion Ash Sutton as the Subaru star stormed from 18th on the grid to snatch seventh at the finish, his final pass coming by the now-struggling Cammish.

BTC Norlin’s Chris Smiley took ninth ahead of Cole, with the former producing one of his best performances in his short BTCC career so far.