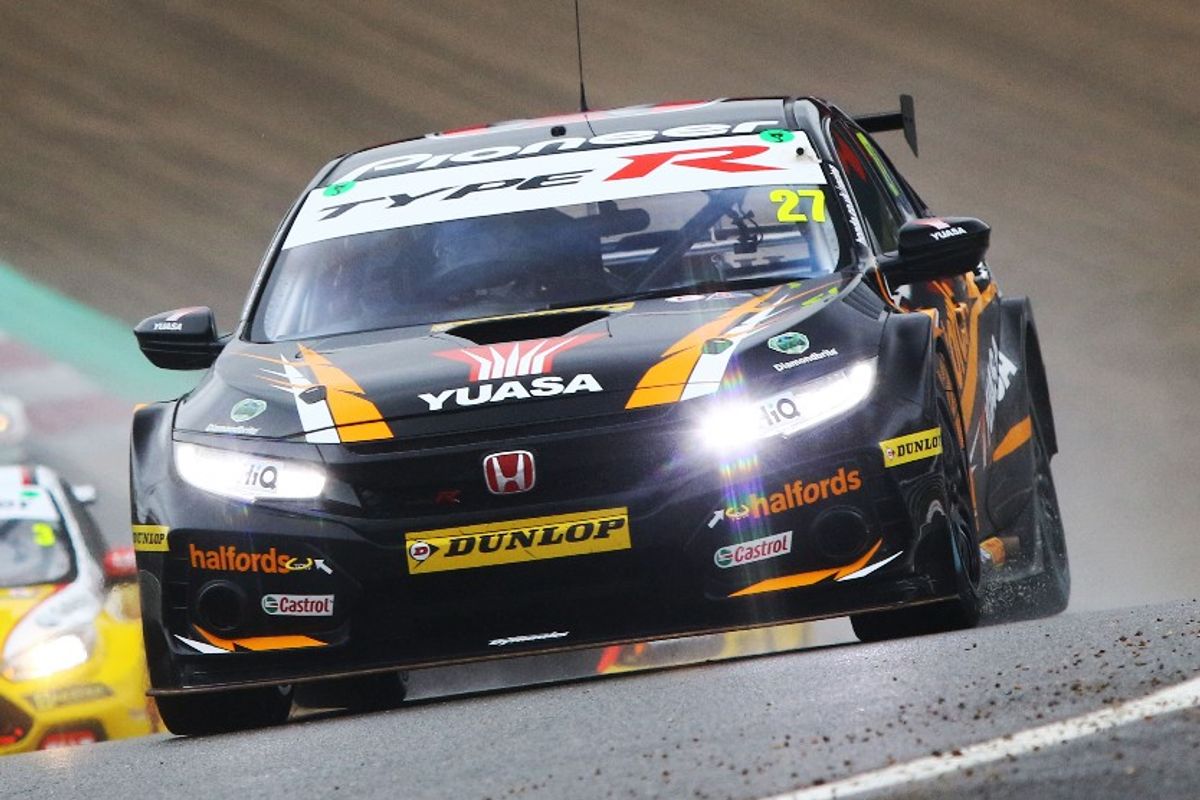 Despite having only first turned a wheel in his car at Season Launch a week-and-a-half ago, Cammish broke the Brands Hatch Indy circuit lap record in qualifying on what looked to have been a stunning pole position run.

Unfortunately, the Yorkshireman had his times erased after passing through a red light in the pit-lane, leaving him with it all to do over again. Undeterred, the 28-year-old returned to the fray and dug deep to secure fourth on the grid, with team-mate Matt Neal directly behind in sixth – and three further Hondas inside the top ten.

On a damp track for race one following earlier rain, Cammish belied the fact that he had never made a start before in the Civic Type R to nail his getaway and then scythe past former champion Andrew Jordan on the run up to Druids. He subsequently had to get his elbows out as his rivals ‘welcomed’ him to the BTCC, earning his championship spurs with a hard-fought eighth-place finish.

The two-time Porsche Carrera Cup GB champion got stuck in again in race two, but as the track increasingly dried out, his wet tyres rapidly faded and he had no defence against those who had boldly opted for slicks. After taking the chequered flag 16th – seventh amongst those on wets – he completed his day’s work with a second points haul for 11th in race three.

Neal’s challenge was almost immediately undone in the curtain-raiser, when contact ahead removed him from contention on the opening lap. The three-time title-winner rolled the dice in race two by bolting slick tyres onto his Honda, but he struggled for traction in the early stages and subsequently found himself used as a punching bag by a number of adversaries. He recovered impressively with a charge through the field from 29th to 12th in the day’s finale.

Halfords Yuasa Racing will return to the track for the second outing of the 2018 BTCC campaign at Donington Park on 28/29 April.

Dan Cammish:
“It’s been a rollercoaster ride, but the car is back in one piece, with all four wheels pointing in the same direction and I’ve come away with my first BTCC trophy, so I’d call that a win. I was heartbroken after qualifying because it was probably the best lap I’ve ever driven, but to top the timesheets showed what this car is capable of so I think I laid down a bit of a marker there. Pulling a time out over a single lap is something I’ve always enjoyed, but I knew the races would be more brutal than anything I’d experienced before – at the end of the day, this is my rookie season and this was my rookie weekend and it’s a completely different ballpark. You’ve also got to remember that the FK8 is a brand new piece of it – I didn’t drive my car for the first time until Season Launch – and we’re perhaps not getting the best out of the tyres yet but I’m with the best possible team for my learning curve in Halfords Yuasa Racing. It was nice to be on the podium, and even though it wasn’t outright, we’ll get there. These guys always do.”

Matt Neal:
“My weekend obviously unravelled in race one. I tried to do something a little off-piste in race two but it was a struggle, which was compounded by getting knocked around a bit for good measure. We at least made up 17 places in race three, which demonstrated the potential of the new Civic Type R, and there are a lot of reasons for optimism moving forward. The car seems to be quick in the dry, the engine is working well and Dan is clearly very fast – for us to both be inside the top six in qualifying with a car that has far from achieved its full potential yet is very encouraging. We still have some work to do in wet trim, but it’s a new car so that’s only to be expected and one of the biggest positives about the FK8 is its aerodynamics and lack of drag; when we get to the longer circuits where it can stretch its legs a bit, that should really pay dividends. It’s extremely early days and there’s plenty more to come. Better yet, we are going to be light at Donington, so hopefully we can fight back on home turf.”