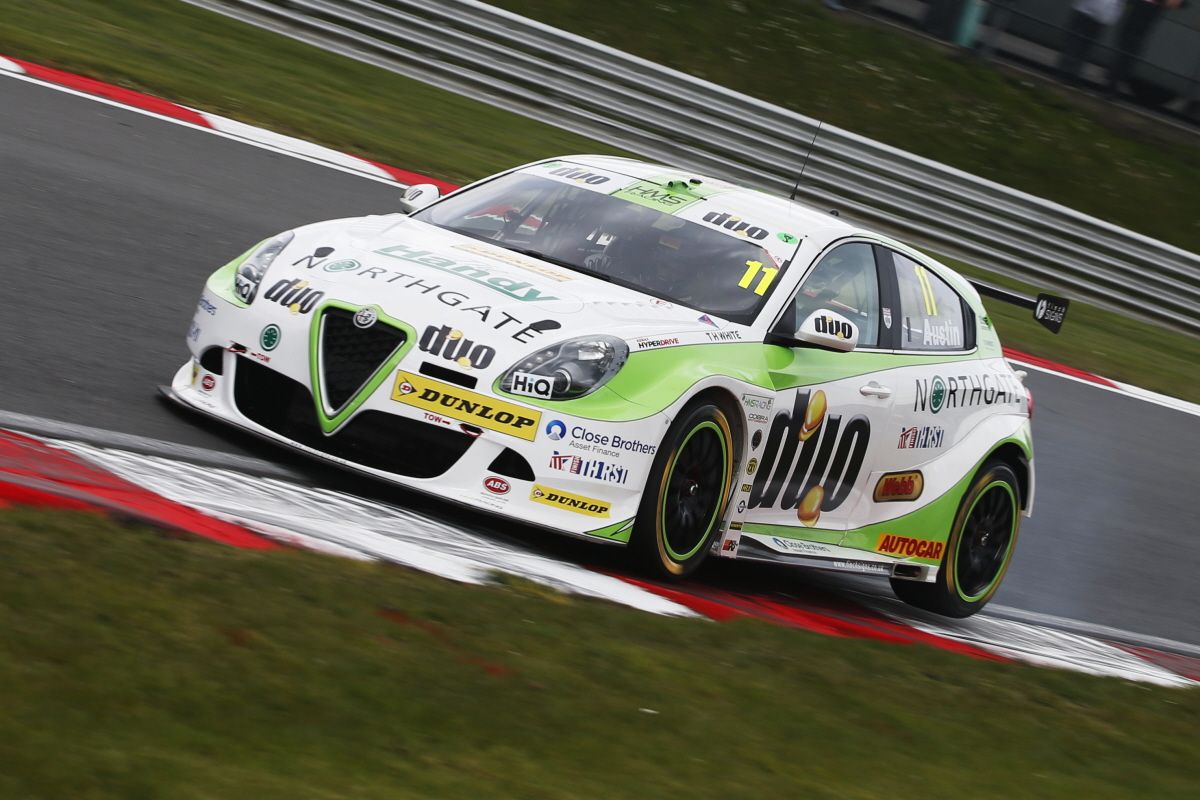 Marking an outstanding start to life in the BTCC for the team’s Alfa Romeo, the result at the 1.2-mile Indy Circuit also sparked emotional celebrations with Austin dedicating the performance to the memory of late team mechanic Shane Stokes, who very tragically lost his life late last year.

Added to a sensational sixth place finish, from 29th on the grid, in the preceding wet-but-drying race where an inspired gamble on slick Dunlop tyres paid dividends, the Evesham driver departed Brands Hatch an impressive fourth in the outright BTCC championship standings.

“It’s for Shane”, said an emotional Austin immediately after the final race, “It’s very mixed emotions to be here [on the podium], we miss him a lot – a lot – and this is for him. He’s looking over us and gave us that luck in race two with the reverse grid draw.

“We didn’t have the front tyres to win it, this is the first time we’ve put soft tyres on it, so we’ve still got a huge amount to learn with this car but it’ll come. It’s a great base car, the engineering that’s gone into this is the best I’ve seen on this grid.”

He added: “We just need to figure out how to get it to work, we need a couple of test days and a bit of development to do that. We’ve got great support from DUO, Northgate, Close Brothers, and with their help I’m sure we’ll get it there.”

From the outset on Saturday during the two practice sessions, the competitiveness of this year’s championship was underlined with less than a second covering the top 30 cars. In qualifying later in the day, mere fractions made all the difference and Austin was just 0.2 seconds shy of the eventual pole time with a lap of 48.289 seconds (90.05mph), meaning 11th on the grid for race one.

Rain throughout the morning on Sunday resulted in a very wet track for the opening BTCC race of the 2018 season and, perhaps unsurprisingly, it wasn’t long before the first round fell under Safety Car conditions.

Austin made a good start to the contest and although edged back to 12th into Paddock Hill Bend, he then maintained that position initially before moving back into 11th place prior to the cautionary period on lap three – caused by a first lap skirmish at Surtees involving several cars.

Racing resumed on lap seven and although slipping back to 12th into Paddock Hill Bend he pressed on. At Druids, though, contact from Tom Oliphant’s Mercedes on entry to the turn, and then more contact from Oliphant at the exit, led to broken rear suspension and retirement for the Alfa.

Austin, of course, had a mountain to climb in round two from 29th on the grid after the enforced non-finish in race one, but with the track surface starting to dry, even though still very slippery, the choice was taken to gamble on slick tyres in the belief they would come good later in the race.

Holding position initially, racing then fell under Safety Car conditions for several laps before the action resumed on the sixth tour. Austin was 28th at that point but as the encounter moved past lap 10, the slick-shod cars began to come into their own on an increasingly dry racing line.

By lap 13, Austin had posted the fastest lap of the race on his harder compound slicks and after breaking into the top 20 on lap 19 he gained no fewer than five places the next time around. With just seven laps to go, the BTCC fan-favourite had closed to within 10 seconds of the race lead as he continued his ultra-impressive surge through the order.

By the end of lap 22 the Alfa Romeo was into ninth place and Austin then took eighth the next time around before leaping into the top six where he stayed to the flag on lap 27, a fantastic result after an inspired tyre gamble. His fastest lap of the race was just 0.3 seconds shy of the quickest of all.

“The early laps were very difficult on slicks”, explained Austin, “When I saw [Senna] Proctor and [Matt] Simpson go past me I wondered what was going on as I knew they were on slicks as well, but I didn’t realise they were on the soft slicks so they were massively beneficial in those conditions. The Alfa did a good job and I was just gutted I ran out of cars to overtake – it was very enjoyable!”

Post-race the draw was made for the partially reversed grid for round three, and Austin was awarded pole position for the weekend’s finale where the Alfa was scheduled to run the soft option tyres. Making a fantastic launch from the head of the grid on the now dry track, Austin powered into a healthy lead of almost a second before the Safety Car was deployed on lap two.

When racing resumed at the beginning of the sixth tour, the DUO Motorsport with HMS Racing star maintained his lead but at the halfway point of the race he was edged back to second place. Staying in close company initially, as the laps counted down Austin had to keep an eye on his mirrors for the advancing Mercedes of Adam Morgan.

Into the penultimate lap the Alfa and Mercedes went side-by-side over the line with Morgan edging ahead. Austin tried to fightback, but wisely settled for third and a magnificent podium result on the debut weekend for the No.11 Giulietta.

Reflecting on an outstanding start to the new BTCC season, DUO Motorsport with HMS Racing team principal Simon Belcher said: “I’m obviously super proud of the whole team, everyone has done an incredible job with the Alfa and there have been a lot of late nights to get us to this position – and this is only the start.

“To see Rob on the podium on our first weekend with a brand new car, which only had three days of running prior to coming to Brands, is more than we could have dreamed of. Obviously, we’re all thinking of Shane [Stokes] this weekend who is so dearly missed by everyone at the team. This result is for him, he’ll always be a massive part of whatever DUO Motorsport with HMS Racing achieves.”

There is now a three week break in the BTCC calendar with rounds four, five and six of the season taking place over the weekend 28th/29th April at Donington Park National Circuit in Leicestershire.