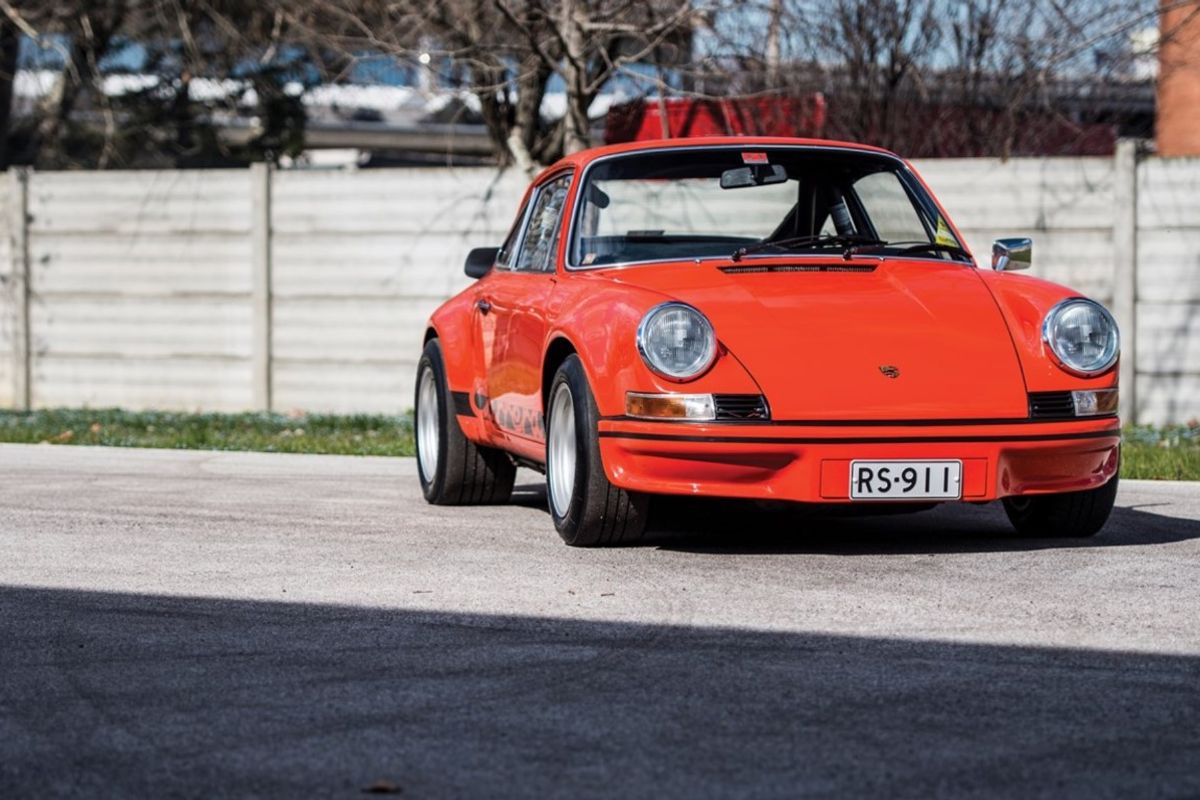 Factory built for Finnish racing and rally driver Leo Kinnunen
One of only two 2.7 RS coupés constructed with ST wheel arches
The only 1973 2.7 RS factory-equipped with a 1974 Carrera 3.0 RS rear spoiler
Highly original throughout, with 63,213 original km
Every one of Porsche’s Carrera RS 2.7s is highly sought after today, but some are perhaps more desirable than others. Beyond the early Homologation models, there are the 200 M471 ‘Sport’, or ‘Lightweight’ versions, which weighed in at about 100 kg less than the standard RS Touring model, having been relieved of their insulation, soundproofing and convenience/comfort accoutrements. These early series Lightweights utilized thinner sheet-metal and window glass. With its fuel-injected flat six developing 210 bhp, the RS 2.7 was a formidable machine.
The factory is known to have retained several Lightweights for later competition use. Among that already rarefied group, there are a few that stand out even more, including this wonderful example, serial number 1177, purchased by Porsche on behalf of Finnish racing legend Leo Kinnunen.

Starting his racing career on two wheels rather than four, Kinnunen was quick to find success in motorsport in Finland in both autocross and ice racing. His big break came after testing a Porsche 917 at the Ӧsterreichring. Partnered with Pedro Rodriguez in the World Sportscar Championship, he stunned the world by taking the chequered flag at the 1970 24 Hours of Daytona, which led to the pair winning the overall championship that year. At the Targa Florio that same year, Kinnunen reset the lap record with a time of 33:36, shattering the previous record by some 90 seconds, a record that was never beaten.

Mr Kinnunen was at that time racing a Porsche 917/10 Turbo in the Interserie, the European equivalent to the North American Can-Am Challenge series, a series that he would win three years in a row from 1971–1973. Kinnunen had proven himself to be not only a fearless prototype driver for John Wyer and Gulf, but he also enjoyed world-class rallying, a sport at which Finns have long demonstrated a natural ability. For the 1973 1000 Lakes Rally, Kinnunen wanted an agile and powerful car in which to pre-run the route, and perhaps also to practice ahead of the Targa Florio, where he shared a Porsche Carrera RSR 2.8 ‘Mary Stuart’ with Claude Haldi. This 2.7 RS was the perfect fit for the task, slightly more comfortable than his racing car but similar enough to provide a comparable experience behind the wheel.

Delivered to the Hahn franchise in Fellbach, Germany, 1177 offered several unusual features; at Kinnunen’s request, it was fitted with larger ‘ST’-style wheel arches to accommodate wider wheels and tires. A second example was subsequently built for another factory driver, Herbert Linge, but Kinnunen’s was the only 2.7 RS with a ‘tea-tray’ rear spoiler as used on the 1974 Carrera 3.0 RS, rather than the modest burzel, or ducktail, typical of the 2.7 RS series. As befits such a competition-themed automobile, this RS was fitted with a limited-slip differential, a Matter alloy roll cage, a pair of deep Recaro cloth-covered rally seats with thumbscrew-adjustable backrests, Repa racing harnesses and black rubber floor mats. Kinnunen also specified a larger-than-normal steering wheel to allow better control on loose surfaces, and a raised passenger seat to improve navigator vision.

Following the 1973 season, Kinnunen purchased the car from Porsche for his own, personal use and kept the car on dealer plates with his mechanic in Germany to avoid stinging import duties in Finland and presumably because having the car in Germany was convenient while Kinnunen was driving in the Interserie. This car eventually passed through the hands of several other Finnish enthusiasts before its current enthusiast owner, an individual with several other unique and interesting Porsches in his collection. It has been featured in several Finnish automotive magazines, including Mootori, Porsche Club Finland and Klassikot, as well as Porsche GT in English.

Showing just 63,213 km at time of cataloguing, this unique Carrera retains much of its original Tangerine paint and its correct original M471 interior. A rear-quarter window still carries an original decal from Kinnunen’s AAW Racing Team. It is supplied with a folio of documents and photographs, including an extract from the factory build sheet, correspondence from Mr Kinnunen confirming his ownership, registration forms and some service records.

Mr Kinnunen passed away a year ago, but his beautiful Carrera RS 2.7 Lightweight and his legacy remains with us today. Arguably one of the most significant and compelling 2.7 RS’ to come to market in recent memory, Kinnunen’s unique 2.7 RS would stand proudly in any world-class collection of sports and racing cars.

The car comes with tool kit, jack and two sets of wheels, ST wheels fitted during the photoshoot, and original RS Lightweight wheels which can be fitted with spacers