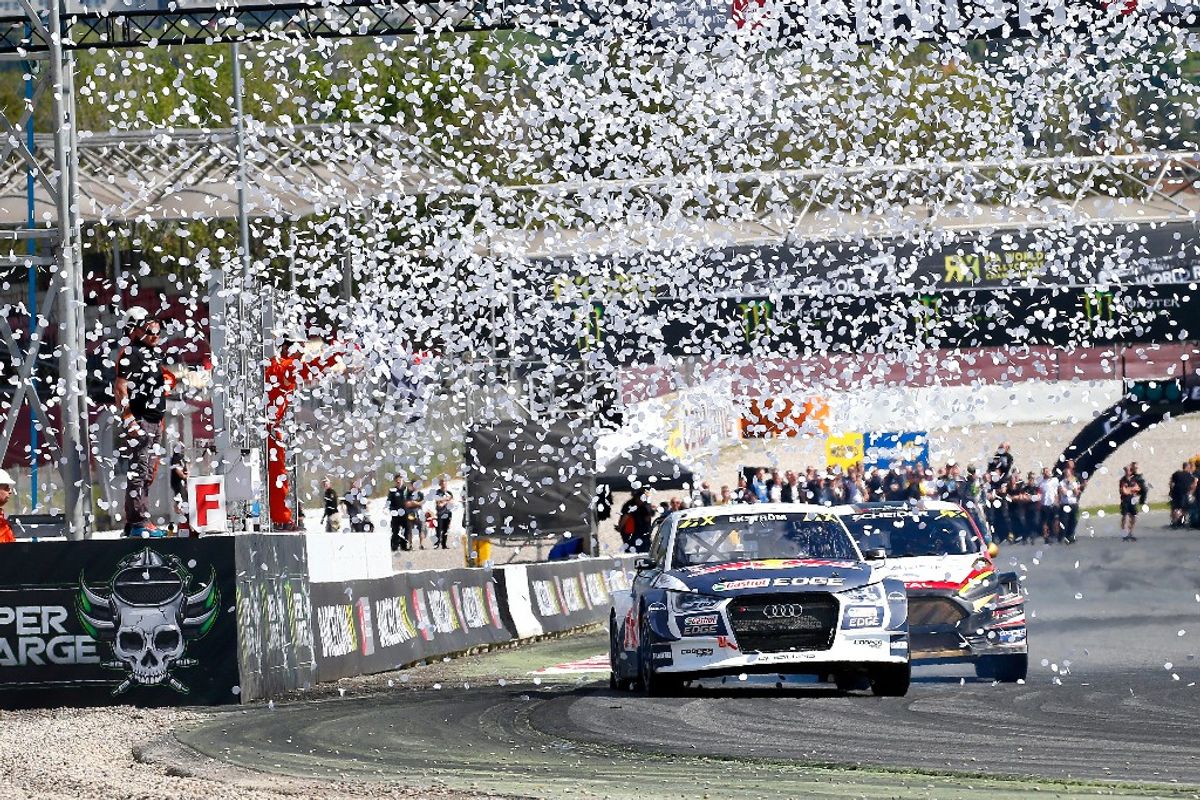 The 2018 FIA World Rallycross Championship presented by Monster Energy roars into action this weekend as the opening round of the eagerly-anticipated 12-event season kicks off with the World RX of Catalunya-Barcelona on 14-15 April.

A field of 15 permanent Supercar entries will battle it out for the coveted World RX Drivers’ title this season, with reigning champion Johan Kristoffersson facing a renewed challenge from a high quality line-up as he bids to hold onto his hard-earned crown.

The Circuit de Barcelona-Catalunya once more sets the scene for the World RX season opener, its fast sweeping curves and undulating sections renowned for challenging drivers and thrilling spectators equally. Furthermore, the F1 and MotoGP venue is complemented by its Joker Lap sequence, which has led to memorable moments in previous years as drivers tackle the parallel, off-camber track sections. The start line has been repositioned ahead of this year's event with turn one now a left-hander leading uphill and into an unsealed section. Race strategy may also change now the Joker is located mid-lap.

Sweden’s Kristoffersson heads up the permanent Supercar entries alongside PSRX Volkswagen Sweden team-mate and two-time World Champion Petter Solberg, the pair getting their hands on a revised VW Polo R for 2018 in the manufacturer's quest to keep hold of both the Drivers’ and Teams’ titles.

Olsbergs MSE returns to World RX with a pair of latest specification Ford Fiestas for Kevin Eriksson and Robin Larsson, while GRX Taneco expands to include Timur Timerzyanov alongside Niclas Gronholm in two newly-constructed Hyundai i20 Supercars.

The World RX of Catalunya-Barcelona will also herald the much-anticipated race debut for the GC Kompetition Renault Megane RS R.X. Developed by legendary engineering house Prodrive, the cars will be campaigned by Guerlain Chicherit and Jerome Grosset-Janin.

As well as the 15 permanent World RX drivers, two round-by-round entries will compete in the World RX of Catalunya-Barcelona; Oliver Bennett will debut the Team XITE MINI Cooper S and Herve "Knapick" Lemonnier will race a Citroen DS3.

In addition to the headline World Championship, the FIA European Rallycross Championship for Supercars (Euro RX) joins an action-packed bill of racing for the first of its own five-round campaign. The Supercar class will see 26 drivers fighting it out for victory, with defending champion Anton Marklund bidding to get the defence of his Euro RX title off to a strong start against a new wave of rivals, including Reinis Nitiss, “CSUCSU” and Thomas Bryntesson. The highly-competitive FIA European Rallycross Championship for Super1600 machines will also kick off in Catalunya-Barcelona with 25 drivers out to succeed last year’s title-winner Krisztian Szabo.

World RX Managing Director for IMG, Paul Bellamy commented: “With new teams, updated cars and driver shuffles up and down the order, the stage has been set for what promises to be another fantastic season of World RX racing. The Circuit de Barcelona-Catalunya is the perfect venue to kick things off with its tricky layout keeping drivers on their toes after the long winter break, while the decision to move the start and finish lines is bound to create a few exciting moments and shake up the Joker Lap strategies. The local fans have shown tremendous enthusiasm towards World RX ever since the Catalunya-Barcelona round was included on the calendar in 2015, and this year will surely be no different as we wait to see who will top the podium in round one. Here’s to another memorable World RX season.”

The 2018 World RX season will comprise of 12 events with the field moving from Catalunya-Barcelona to Montalegre in Portugal, Mettet in Belgium and for the first time Silverstone, which will host the World RX of Great Britain as part of the all-new Speedmachine festival on 26-27 May. From here, the series heads to familiar rounds in Norway, Sweden, Canada, France and Latvia, before the inaugural World RX of USA at the Circuit of The Americas on 29-30 September. The 2018 season wraps up with Germany and the Cape Town finale on 24-25 November.

Monster Energy Super Charge Award
The Monster Energy Super Charge Award will once more reward the driver with the fastest reaction to the starting lights in the World RX final this season. Emphasising the importance of getting off the line quicker than the competition, this coveted award from the World Championship’s presenting sponsor will serve to ramping up the tension further ahead of the crucial final.

From a Cooper Tires point of view
Paul Coates, General Manager - Motorsport, Cooper Tire Europe, said: “Circuit de Barcelona with its fast asphalt corners and quick changes between sealed and unsealed surfaces guarantees some exciting racing and the Cooper rallycross tyre is a perfect match for this track. Over the winter all the teams have been working hard improving and upgrading the cars which will increase the acceleration, braking and lateral forces the tyres would have experienced in previous years. This first event of the season will show us just how much more performance has been gained and how one of the most important elements of the car, the Cooper rallycross tyre, meets the increased challenge.