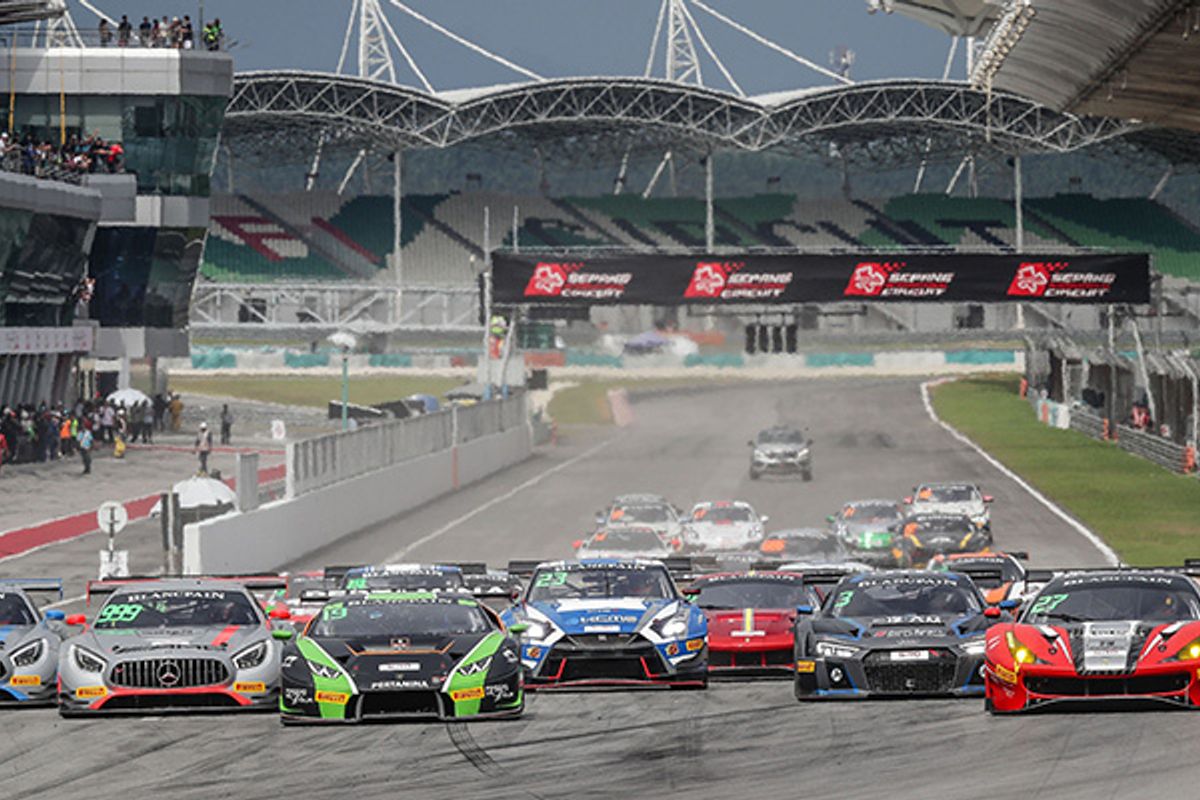 A brief Safety Car period at the end of lap one was swiftly followed by a Full Course Yellow, but when sustained action finally broke out after 13 minutes it was pole-sitter Lind who took advantage of the squabble behind to pull clear.

Meanwhile, Leo Ye Hongli – who’d started second – was under intense pressure from Bastian who’d slipped back to third after initially passing the HubAuto Corsa Ferrari on the opening lap. Their battle also brought OD Racing’s Aditya Patel – up from sixth on the grid – into play, but the Indian’s progress was soon checked by a ruptured coolant hose that ended the Audi’s race moments after following Bastian past Ye.

While Ye – back up to third following Patel’s demise – continued to keep Edoardo Liberati’s KCMG Nissan at bay, Lind was busy establishing a six-second advantage over Bastian when the pit window opened after 25 minutes. GruppeM opted to stop their #999 Mercedes-AMG immediately and duly changed tyres hoping the extra grip would negate the time lost doing so. That, coupled with FFF Racing Team’s decision to stop later and not fit new rubber ultimately decided the race.

Indeed, Kodric re-joined the action with his and Lind’s advantage slashed to 3.5s. And, following the race’s second Full Course Yellow period, the Mercedes-AMG was soon up behind the Lamborghini.

A masterclass in defensive and offensive driving soon ensued, Kodric on visibly deteriorating tyres placing his car perfectly to always have the inside line when it mattered most despite Niederhauser’s series of over-and-under passing attempts. Several times the Mercedes-AMG pulled alongside only to find a Lamborghini resolutely standing its ground.

It was clear only a special pass would relieve Kodric of the lead, and that’s exactly what his Swiss pursuer served up with less than seven minutes remaining. Anticipating Kodric would go defensive, Niederhauser instead moved left, braked late and sailed around the outside at Turn 7. The pair made light contact exiting the corner but, with no harm done, the GruppeM driver was finally free. 4.3s separated the pair at the finish.

Behind, Nick Foster appeared odds-on to complete the podium after inheriting third from his HubAuto Corsa co-driver, Ye. But Raffaele Marciello had other ideas after steadily moving up the order following great work from his Am co-driver Brice Bosi, who was running seventh after mixing it with the Silver contingent when the pit window opened. A last lap pass therefore saw GruppeM’s second Mercedes-AMG finish third overall and seal Pro/Am honours.

Fifth went to KCMG’s Liberati and Florian Strauss, the latter counting himself amongst Marciello’s victims, while Absolute Racing’s Anthony Liu and Josh Burdon were first of the Audis home in sixth.

GruppeM Racing and Mercedes-AMG wrapped up a double victory courtesy of Will Russell and Reinhold Renger, although theirs was more straightforward than the team’s GT3 win.

Ward initially lost the lead to Clearwater Racing’s Richard Wee, but once back ahead the American was never troubled. 11.5s clear when the pit window opened, his German co-driver Renger was sufficiently ahead at the chequered flag to claim victory despite the team incurring a post-race 30s penalty for Ward’s Safety Car infringement.

Reigning champions Frank Yu and Jean-Marc Merlin took what they described as an unlikely second place after starting fourth and dropping back to dead last, while Ringo Chong and Gilles Vannelet were third in the Team iRace.Win Mercedes-AMG that starts tomorrow’s race from GT4 pole.

The weekend’s second 60-minute race begins at 11:50 tomorrow. Watch it live on the championship’s Facebook page and website.

DRIVER QUOTES
Patric Niederhauser, #999 GruppeM Racing Mercedes-AMG GT3: “It was a lot easier to catch Martin [Kodric] than to overtake him, but it was also a lot of fun trying! You can’t ask for anything more than close, door-to-door racing. I had a good car and the tyres still felt good at the end, so I was waiting for him to make a mistake. I saw the space on the outside and just went for it. It was close – we touched – but we were both racing on the limit. After that I could build a little gap and bring it home.”

Martin Kodric, #19 FFF Racing Team by ACM Lamborghini Huracan GT3: “Dennis [Lind] did everything he could in the first stint to build a gap, but we also gambled a little bit with the strategy and I caught some GT4 traffic while exiting the pits, which didn’t help. However, Patric was very fast and I knew that sooner or later he would be there. I did everything to defend but he was driving and attacking well, using my disadvantages to his advantage. I tried to keep him at bay for as long as possible. It was really close and probably the best battle I’ve ever had with anyone, but ultimately we just didn’t have the tyres to stay ahead. Still, it was great fun.”