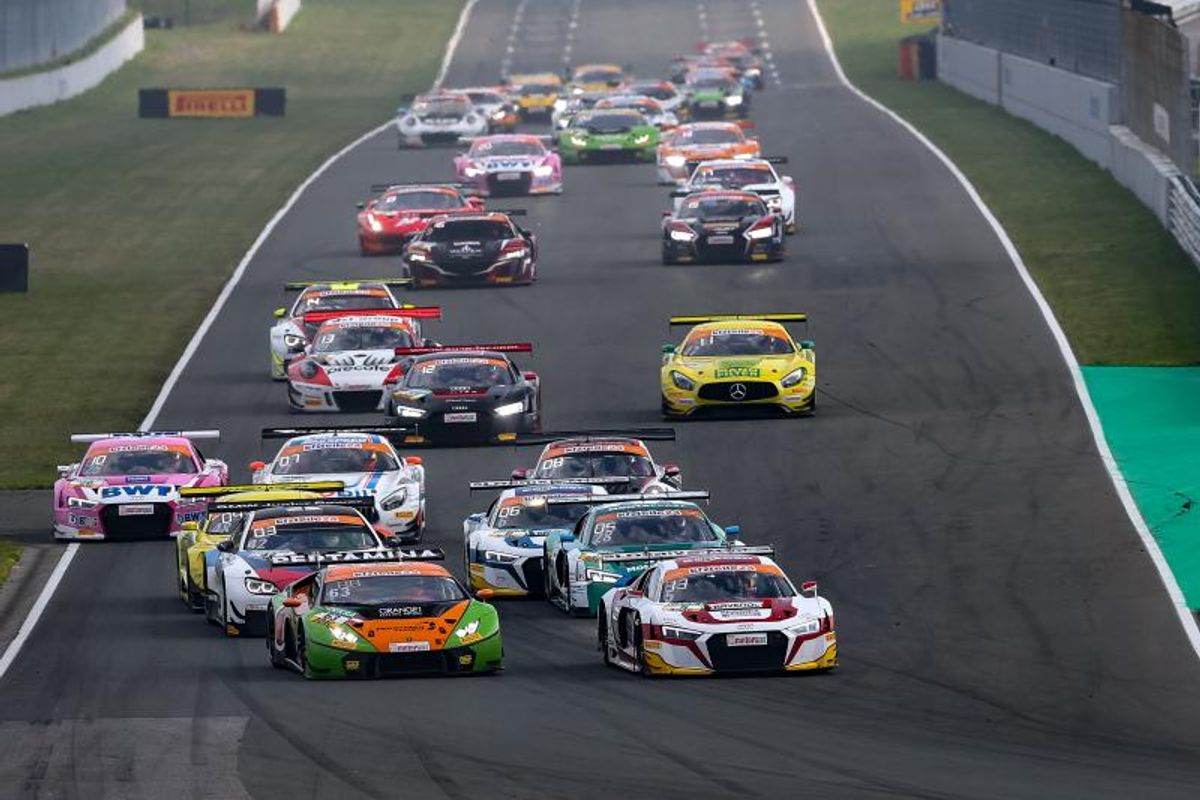 Two ADAC GT Masters newcomers caused a major upset in the season opener at Motorsport Arena Oschersleben. The Audi pairing of Max Hofer (18, AUT) and Philip Ellis (25, GB, both Phoenix Racing) driving an R8 LMS secured a lights-to-flag victory from pole position in the first competitive outing of the twelfth season of the Super Sports Car League. Finishing in the runner-up spot at the end of a thrilling race were the Lamborghini duo of Mirko Bortolotti (28, ITA) and Andrea Caldarelli (28, ITA, both ORANGE1 by GRT Grasser), just 0.245 seconds behind the winners. However, the Lamborghini was excluded from the race following technical scrutiny due to an infringement of the technical rules. Second place went to Kelvin van der Linde (21, ZA) and Sheldon van der Linde (18, ZA, both Montaplast by Land-Motorsport) in another Audi R8 LMS, while former DTM-Champion Timo Scheider and Mikkel Jensen finished third in their BMW M6 GT3. "An overwhelming moment," said a jubilant Hofer, whose day had got off to the best possible start with P1 in qualifying. "Our quali result had already made our day, but the fact that we were able to convert the pole position into a victory is a powerful motivation for the rest of the season."

Pole debutant Hofer stays out in front at the start

Hofer and Ellis laid the foundations for their eventual win at the start. Pole-setter Hofer showed no signs of nerves, despite the fact that this was his first ever ADAC GT Masters race. The young Austrian defended P1 against veteran driver Bortolotti and hung on to the top position for the rest of the race. The pair in the lead pulled away from those in pursuit over the laps that followed and had a close-fought scrap for first place which Hofer retained through to the compulsory pit stop. The gap between the Audi driver and Bortolotti was never more than 0.8 seconds. The tight battle out in front continued even after their respective co-drivers, Philip Ellis and Andrea Caldarelli, had taken over and was only interrupted by a short safety car period to enable removal of the Honda NSX shared by Christopher Dreyspring (19, GER) and Giorgio Maggi (20, CH, both Honda Team Schubert Motorsport). Ellis had a narrow lead of 0.245 seconds on Caldarelli at the finish line. The two winners also secured top ranking in the Pirelli Junior classification for drivers under the age of 25.

The second-placed Lamborghini of Bortolotti and Caldarelli and the sister cars of Ezequiel Perez Companc (23, ARG) and Franck Perera (34, FRA, both GRT Grasser Racing Team) and of Rolf Ineichen (39, CH) and Christian Engelhart (31, GER, both GRT Grasser Racing Team) were then excluded from the race after a telemetry system was found in all three cars that is not allowed under the Sporting Regulations (Art. 27.3). All teams behind the three Lamborghini move up in the classification.

Kelvin and Sheldon van der Linde were classified second and clinched their first joint podium finish in the ADAC GT Masters. The brothers managed to close for a time on the two cars in front but were unable to stay with the leaders later on because of a slow puncture. Two-time DTM champion Timo Scheider (39, GER) and team-mate Mikkel Jensen (23, DK, both BMW Team Schnitzer) came third on his ADAC GT Masters debut in the BMW M6 GT3, just 0.6 seconds down on second place. Luca Stolz (22, GER) and Sebastian Asch (31, GER, both Zakspeed BKK Mobil Oil Racing Team) finished fourth in the best-placed Mercedes-AMG GT3.


Comments from the winners

Max Hofer (Phoenix Racing, Audi R8 LMS): "I came under a lot of pressure from Mirko Bortolotti. The Lamborghini was extremely strong. He had a small advantage on some sections, but I concentrated on my own race and didn't look back. I kept varying my line to make it as hard as possible for him. Ultimately, that worked. Our team crew work day and night, and I'm delighted that we've been able to reward their efforts with this win."

Philip Ellis (Phoenix Racing, Audi R8 LMS): "We weren't expecting to win here today. We knew we had the potential to get among the front-runners, but we never thought that we had enough for the victory. Max put in a great performance both in qualifying and in the first stint and laid the perfect groundwork. It was really close towards the end, and I had to fight hard to defend the lead. There was a lot of pressure from behind, so I'm all the happier that I managed to hang on for the win."