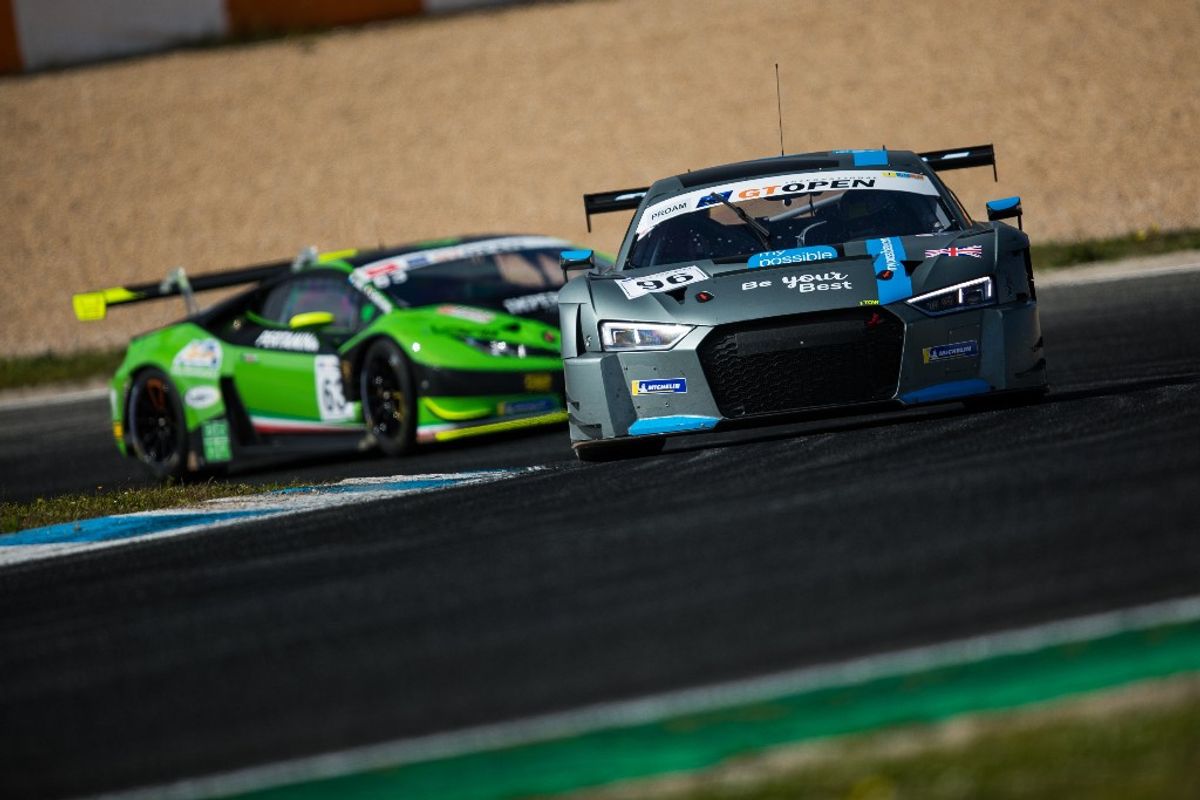 Optimum Motorsport looked set to secure a near-perfect start to the International GT Open championship at Estoril, Portugal at the weekend (14-15 April) as Ollie Wilkinson and Bradley Ellis were on track for a fantastic Pro-Am class victory at the wheel of the #96 Audi R8 LMS, only for a gearbox failure on the last lap to deny them the result.

The opening race of the campaign got off to a tricky start as Ollie Wilkinson lined up in fifth position in class and 13th on the grid overall for the 70-minute event. Unfortunately, contact between two cars ahead on the opening lap resulted in the circuit being briefly blocked with Wilkinson hit at the rear and pushed into a spin.

Racing resumed with Wilkinson running fifth in class, 20th overall, gaining one position before handing over to Ellis as the pitstop window opened. Ellis put in a strong stint with some great wheel to wheel battling, but the damage in terms of the race result, had been done on that lap one incident and he took the chequered flag in fourth position in class, 14th overall.

The second race, this time 60 minutes, saw Ellis qualify a fine second in class, fifth overall, in tricky damp conditions. The race itself was dry and Ellis made a great getaway from the rolling start to move up a position. Running fourth, Ellis was soon into the groove and set about the former pole-sitter of Toby Sowery ahead, whilst keep an eye on the Pro-entry of Riccardo Agostini in the rear-view mirror.

It remained a three-way battle for the third position with Ellis in the middle of the Lamborghini metaphorical sandwich before Agostini made a dive and gained position from Ellis. Very much racing for Pro-Am honours, Ellis resumed in fifth overall, second in class, just 1.5s behind Sowery.

Ellis pitted and handed over to Wilkinson on lap 20 and after the stops had shaken out, Wilkinson topped the Pro-Am timing screen in fourth position overall, eight seconds clear of his nearest Pro-Am challenger of Marceli Hahn with just over 20 minutes of racing remaining.

In just his third event at this level, Wilkinson controlled the pace and allowed the Pro entries of Kang Ling and Andrea Montermini through to run sixth overall, but crucially maintained and extended his margin over the Mercedes behind. Heartbreak was to follow however, as on the very last lap, Wilkinson suddenly slowed with a gearbox failure. With the victory gone, he took the chequered flag seventh in class, having lost some 75-seconds on his 35th tour.

The team are next out in the British GT Championship at Rockingham aiming for a second win of the year, while the next race in the GT Open will be at Spa-Francorchamps in June.