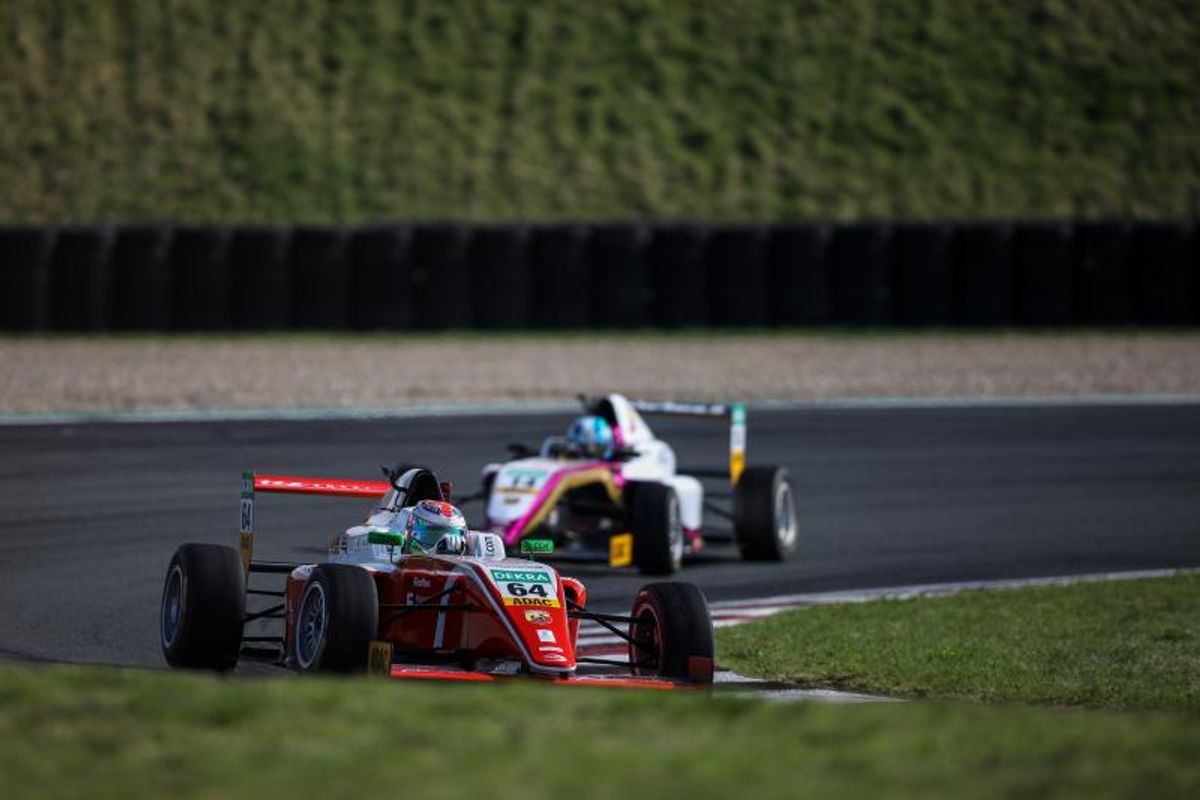 "I was very nervous before the start," said Caldwell. "But I was very focused and fast in the race itself which went without a hitch. I was able to maintain my pace even after the safety car. That was the perfect way to round off the weekend, though I admit I was a bit disappointed with Saturday. Overall, however, we can be satisfied, and we'll be back on the attack at Hockenheim."

Pole-sitter Caldwell made a great start in brilliant sunshine and managed to put several car lengths between himself and his closest pursuer, Leonardo Lorandi (17, Italy, KDC Racing). Lirim Zendeli (18, Germany, USA Racing CHRS), who had dominated the weekend so far with his two victories on Saturday, lost one place after the start and dropped down to P9. The retirement of Ido Cohen (16, Israel, ADAC Berlin-Brandenburg e.V.) on only the second lap led to the safety car being called out, but Caldwell managed to pull away again on the restart.

In an unfamiliar midfield position, Zendeli found his race was suddenly over. He was forced to retire on Lap 6 following a contact with Liam Lawson (16, New Zealand, Van Amersfoort Racing). A thrilling battle for second place developed between Andreas Estner (17, Germany, Neuhauser Racing) and rookie Gianluca Petecof (15, Brazil, Prema Powerteam) behind Caldwell, who continued to lap the circuit unhindered. Estner retired four minutes before the end of the race after a collision with Petecof, who was to his rear. The Race Director handed the Brazilian a drive-through penalty for the incident, which benefited Fittipaldi, who moved up into P3 initially and then took second place from Lorandi. Lorandi subsequently lost his third place after being handed a 30-second penalty. This promoted Weerts to third and to a podium.

The ADAC Formula 4 contestants now have a three-week break, at the end of which they travel to Hockenheim for rounds four to six of the season. TV channel SPORT1 is showing races from the fourth season of the ADAC High-Speed Academy. All of the races are viewable as a free livestream on sport1.de, adac.de/motorsport and youtube.com/adac.

Enzo Fittipaldi (second, Prema Theodore Racing): "It was a great race. My start was a lot better than in the two races on Saturday. That's what we're working on, and it's starting to pay off. The bottom line, though, is that this was a very good weekend for us and the perfect start to the new season."

Charles Weerts (third, Van Amersfoort Racing): "P3 is a good result to round off the weekend. We can now build on that."

Niklas Krütten (Best Rookie, ADAC Berlin-Brandenburg e.V.): "It's quite a special feeling. I couldn't have imagined it going any better, so I'm very happy. That was a perfect conclusion to the first weekend. There are some big names in the frame, some very good drivers. It was an exhausting and nerve-racking race."