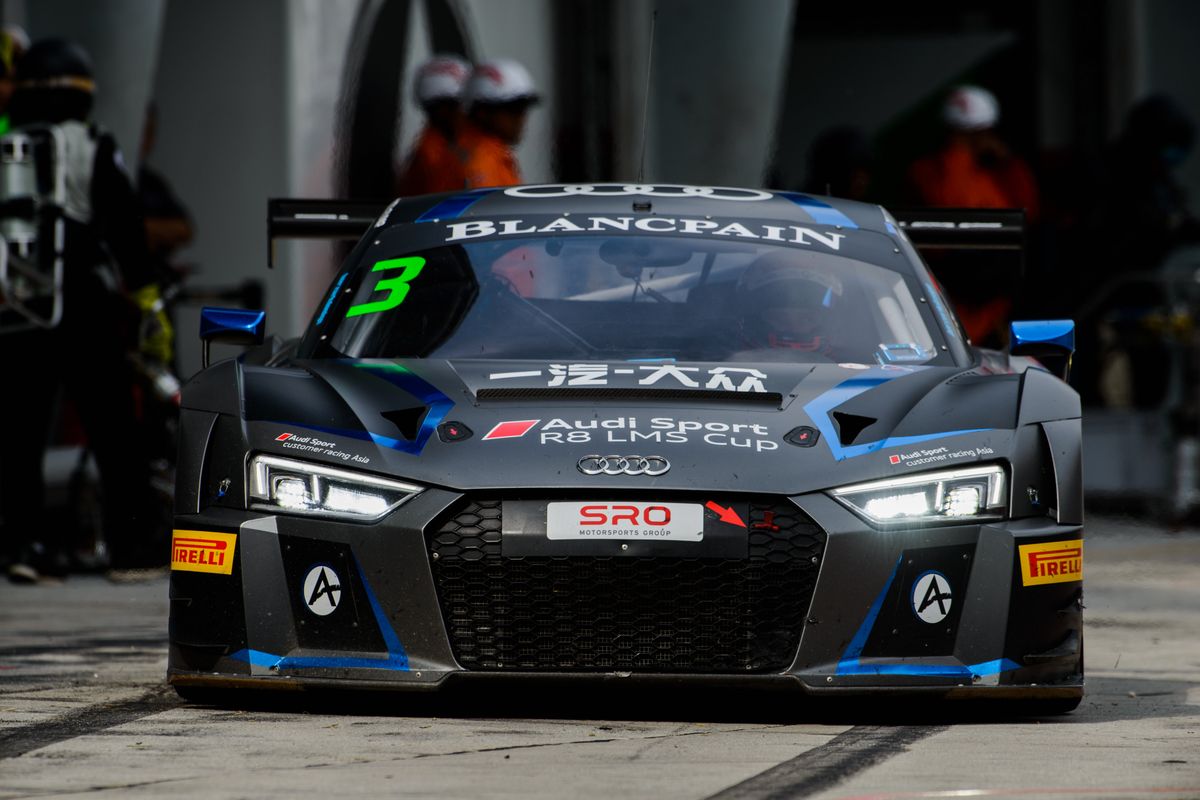 Teammates Cheng Congfu and Martin Rump clinched the first win in the Silver Cup class as Andrew Kim and Adderly Fong showed that they can also be a force in the upcoming races.

The best of the qualifying was kept for the second qualifying session with Burdon impressing the whole paddock by clocking the fastest lap time with a lightning 2:02.495.

Rump set a strong lap time of 2:03.203 to sit in fourth on the time sheet as the fastest of the Silver Cup contenders. With only one flying lap, Adderly Fong pushed his V8 engine to the limit and crossed the line in P8 overall, and fourth of the class.

The first race of the weekend saw Liu and Burdon finishing as the highest Audi R8 LMS GT3 pairing. The newly formed driver duo crossed the line sixth overall, second in the Pro/Am class, marking a strong debut for Burdon and an impressive showing for his Chinese teammate after they worked their way forward from a starting position of eighth.

Andrew Kim and Adderly Fong race was much shorter than what they would have liked. The #7 Audi R8 LMS duo retired during the opening lap of the race after being involved in an accident going into Turn 2.

In the second race of the weekend, pole-position Burdon lost three positions at the start but he quickly got back two positions. The young Australian fought well to hold off further challenges to stretch a gap from the third placed runner. After the driver change, Liu put in another consistent stint to keep the #37 Audi clear of challengers to cross the line in second.

Rump had a horrible start to the race. By being stuck behind a damaged car, the 22-year-old Estonian driver had fallen back down the order to 16th. Within the opening lap, Rump had already forged ahead into 13th. Rump was man on a mission, showing all his talents with a glorious charge through the field to sixth, before handing over to Cheng. The Chinese ace kept moving up the ranks, crossing the finish line in fourth overall, winning the Silver Cup class.

Fong kept out of trouble throughout his stint, moving up to sixth. Kim took over from Fong to finish the race in a respectable eighth, fifth in Pro-Am.

The Blancpain GT Asia Series is back next month, this time at the Chang International Circuit in Buriram (Thailand), from May 12 to 13.

Michael Schneider (Absolute Racing Team Manager): “It was a great way to start the season with a pole-position and podium finishes. As expected the competition is very tough here and we know we have a hard season ahead. Josh and Anthony did a superb job over the weekend. Martin and Cheng have been a bit unfortunate at the start of race two. Martin dropped back to P16 but he had a spectacular recovery and they were fighting for the overall podium at the end. Adderly and Andrew’s crash in race one was not the best start to the season, but they showed great pace in the second race. All in all, the team did a fantastic job on every level during the winter to prepare the cars and it paid off this weekend as everything run flawlessly.”