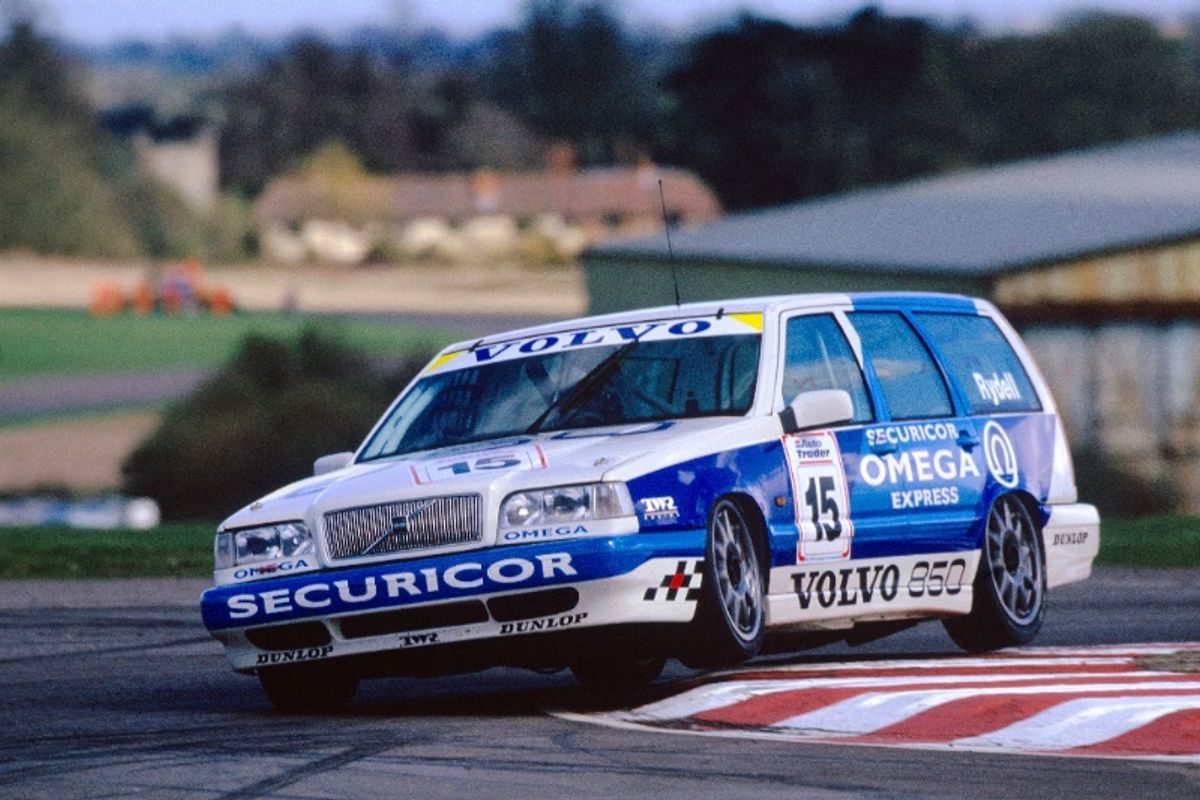 Hailed as one of the most iconic touring cars of all times, the amazing Volvo 850 Estate is the latest addition to the special BTCC Diamond Jubilee Parade – a special star-studded track cavalcade at this summer’s Silverstone Classic (20-22 July) that will feature 60 great cars to celebrate the 60th anniversary of the ever-popular MSA British Touring Car Championship.

Adding to the sense of occasion, the truly whacky Volvo wagon will be reunited with Rickard Rydell who, along with team-mate Jan Lammers, raced the pair of idolised headline grabbers back in 1994.

Moreover, Rydell will be marking another key tin-top milestone at the Classic. Exactly 20 years after winning the BTCC title, the Swedish touring car legend will be coming out of retirement to race the very same Volvo S40 which took him to the coveted crown back in 1998.

The title winning S40 – originally built by the legendary TWR team – was subsequently raced by privateers in various Scandinavian championships. In 2014, however, it was purchased by experienced historic racer Jason Minshaw and painstakingly restored before returning to the track to win one of the spectacular JET Super Touring Car Trophy races at last year’s Silverstone Classic.

Now, however, Minshaw has graciously stepped aside and invited Rydell to contest both spectacular Super Touring showdowns on this summer’s packed Classic race-card.

“I’m really looking forward to it,” confirmed the personable Swede who became a fans’ favourite during a super-successful seven-year spell in the BTCC during which he won 21 races, a winning record only topped by Alain Menu in the hallowed Super Touring era.

“I retired from being a professional racer a few years ago but I’m always happy to do some more races for fun and this, for all the obvious reasons, will be a very special occasion for me. We are hoping to get some of the 1998 TWR team back together for a reunion, too.”

With fellow BTCC stars from the nineties such as John Cleland and Patrick Watts also reliving their glory days on the rekindled Super Touring grid, Rydell will find plenty of familiar faces with whom to share some great memories at Silverstone in July.

While the super-Swede’s crowning moment came with the S40, his BTCC introduction came five years earlier racing one of the two zany 850 Estates.

Back then, like so many other promising young racers, Rydell was still harbouring hopes of becoming an F1 driver. He had won the prestigious Macau F3 Grand Prix in 1992 – the two previous winners were Michael Schumacher and David Coulthard – but without the right backing struggled to progress further up the single-seater ladder.

As a result, he had little to lose when signing-up to spearhead an exciting new Volvo attack on the illustrious BTCC… though wisely no one told him exactly what he was going to be racing.

“It was a pretty unique step,” recalled Rydell now aged 50. “I went straight from having dreams of being a Formula One driver to racing an estate car! When I signed up around Christmas 1993, I had no idea about these secret plans to use the estate – had they told me, I might have thought twice about making the switch. I’d never driven anything quite so big.”

Somewhat predictably, the cumbersome beast proved to be quite a handful, though Rydell did qualify third at Snetterton and posted a top five finish at Oulton Park. But, while never a victor on track, the decision to race an 850 cargo carrier was certainly a big winner when it came to grabbing the headlines.

“Publicity-wise it was an incredible stunt by Volvo,” recalls Rydell. “Indeed, people still talk to me today about racing the 850 estate. It was pretty scary at first as we had done virtually no pre-season testing, but we made it more driveable and somewhat more competitive as the season progressed.”

More importantly, joining Volvo turned out to be a career defining moment and Rydell stayed with the TWR-run team for a further five seasons peaking with in his title-winning campaign in 1998.

“Those Super Touring years were, without a doubt, the highlight of my career,” he admitted. “We had big budgets, lots of testing, the cars were great to drive and it was a fantastic championship. One year I did 38 return flights from Sweden.”

And now Rydell will be retracing those footsteps with another flight to the UK come July – this time to race the S40 and to join the amazing line-up of past and present BTCC stars and cars gathering for the special BTCC Diamond Jubilee Parade on Tin Top Sunday at the world’s biggest classic motor racing festival.

All those wishing to share in the BTCC’s 60th birthday party – and to see Rydell back behind the wheel of the 850 Estate as well as racing his title winning S40 – must purchase their tickets in advance.

As has proved so popular in the past, all admission provides free access to both Silverstone racing paddocks, all open trackside grandstands, live music concerts on Friday and Saturday evenings (topped by Soul II Soul and UB40 respectively), air shows, Drive Live test drives, funfair rides and the vast majority of the family entertainment on offer. Options for camping and hospitality are also available.