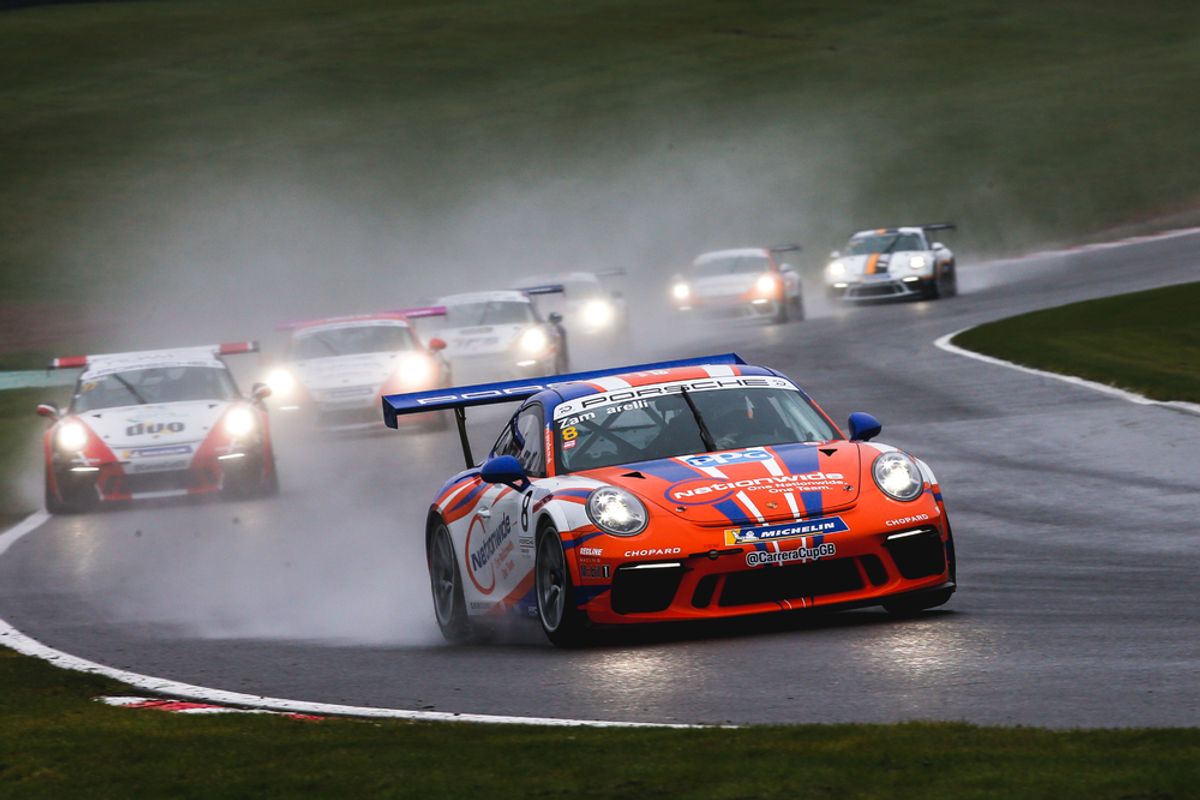 A spectacular pair of races opened the 16th season of the fastest single marque GT racing championship in the UK, the Porsche Carrera Cup GB. An exciting mix of new and returning drivers across all three categories head to Donington Park separated by minuscule margins, with the introduction of a revised race format adding an extra dimension of unpredictability to the weekend.

Having converted his pole position into victory in round one, Dino Zamparelli (Redline Racing) emerged from an action packed weekend with an early two point championship advantage over former team mate, Tio Ellinas (Slidesports). Zamparelli’s dominant performance in the opening round and 3rd place finish in round two confirms the 2017 championship runner-up as a hot favourite for ultimate glory in 2018. Like Zamparelli, Ellinas has moved to a new team for this season, but has already settled in with a pair of second places under his belt – the former GP2 driver looks set to be one of Zamparelli’s main title rivals.

However, both Zamparelli and Ellinas will face fierce competition from the rest of a closely matched Pro category at Donington – the top six cars in the category were separated in the first qualifying session of 2018 by just 0.417s. In particular, Lewis Plato (JTR) showed strong form with 3rd and 4th fourth place finishes. Plato made a near perfect start in drying conditions when the lights went out for round two and he will be hoping to replicate that on the run into Redgate.

Adding to the exciting uncertainty of the 2018 season is the introduction of standing starts in both races and, for the first time, reverse grids in race two. At the opening weekend the first five finishers in race one had their grid positions reversed for race two, with the remaining drivers forming the grid according to their final positions in the first race. This saw Jamie Orton (JTR) start on pole position and establish himself as the driver to beat in the Pro-Am category, with two victories from as many races. But it was Rookie George Gamble (Amigos Team Parker) that emerged from an eventful second race, including two Safety Car periods, to clinch a maiden overall victory. This marks him out as another one to watch at Donington.

Never far from the action in the opening races was 17-year-old Porsche GB 2018 / 2019 Junior Dan Harper who had a promising weekend at Brands Hatch, showing good pace throughout practice, qualifying and both races. Only a puncture following contact slowed his progress in round one, the Northern Irish star nursing a deflating tyre to limp across the line 13th rather than retiring. In the second race, Harper clinched fastest lap before two Safety Car periods put paid to his progress – he will be looking to make amends at Donington. Harper’s team mate Tom Wrigley (JTR) recorded strong fifth and sixth place finishes during rounds one and two. Wrigley historically goes well at Donington – in 2017 he scored a podium finish – so he will be hoping to repeat that form.

Former BTCC star James Kaye (GT Marques) had not sat in a racing Porsche until halfway through the season-opening weekend at Brands Hatch, making his progress throughout the course of the weekend all the more impressive. Rookie Kaye will be hoping to replicate his march up the time sheets over the course of rounds three and four.

Mirroring the close nature of the Pro category, less than half a second covered the entire Pro-Am grid after qualifying for round one. Orton’s pair of victories at Brands Hatch do not perhaps tell the whole story, for the JTR runner was chased by a charging Greg Caton (G-Cat Racing) and Rookies Rory Collingbourne (Welch Motorsport) and Dan Vaughan (Motorbase Performance). Fellow Pro-Am Rookie Esmee Hawkey recorded a podium finish in round two having neatly picked her way through the action after starting fifth. Seb Perez (Amigos Team Parker) and Justin Sherwood (Team Parker Racing) were involved in separate incidents during the season-opening weekend, both will be hoping for clean runs at Donington after each showing good pace.

Of the Am category drivers, Rookie Peter Mangion (Team Parker Racing) and returnee Peter Kyle-Henney (IN2 Racing) look very closely matched. Both arrive at Donington split by just one championship point which reflects their performances over the first weekend of racing. The podium in round two was comprised entirely of category newcomers, Mangion being followed across the line by double-podium finisher Gary Eastwood (G-Cat Racing) and ex-BTCC racer Richard Hawken (Slidesports). One newcomer looking to make up for a spectacular exit after a promising debut last time out is Fraser Robertson (Redline Racing).

Despite many of the runners having tested their new second-generation ‘Type 991’ 911 GT3 Cup cars at Donington during official pre-season testing, the almost 50/50 split of Rookie and returnee drivers makes predicting form difficult. The fast and flowing nature of the Donington Park circuit may well play to the advantage of a different set of drivers, while there is an even greater opportunity to overtake on the longer Leicestershire circuit – particularly relevant to the reversed-grid second race.

The fastest qualifying time at Donington in 2017, a 1.06.859, was posted by eventual champion Charlie Eastwood. Already in the official pre-season test Plato, Zamparelli and Ellinas lapped the second-generation car under this benchmark. F