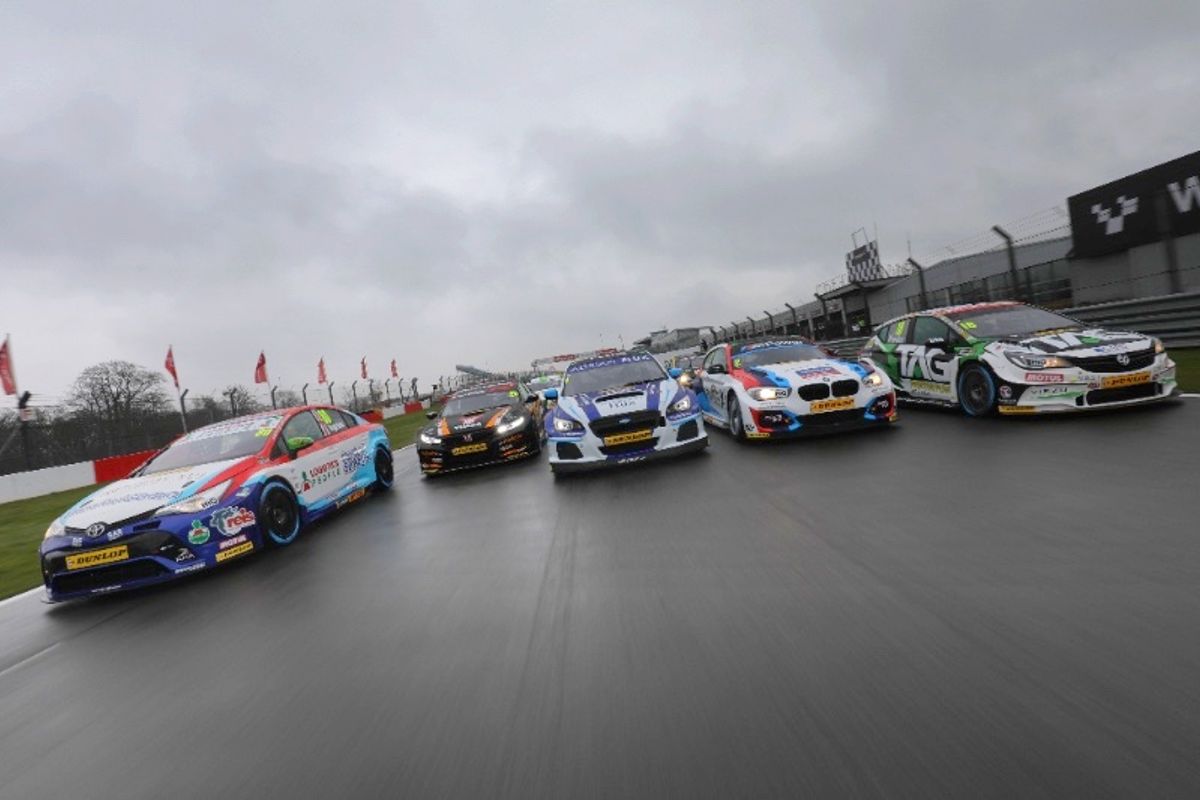 The Dunlop MSA British Touring Car Championship's 60th Anniversary campaign could have scarcely kicked off in more exciting fashion back at Brands Hatch earlier this month, and now all eyes are on Leicestershire as the BTCC heads to Donington Park next weekend (28/29 April).

Three thrilling races produced three different winners with a victory for each of Jack Goff, Senna Proctor and Tom Ingram. Not only was the top step fiercely fought over – with no one driver wresting control over the weekend with more than a single win – but so too were steps two and three on the rostrum, as nine different drivers sprayed the champagne.

Leaving the curtain-raiser in Kent, the top ten championship positions show just how competitive Britain's premier motorsport series is across the board, with ten different marques operated by ten different teams filling those positions – illustrating the BTCC's level playing field throughout its capacity 32-car grid. In qualifying, the level of competition was such that 30 of those cars qualified within a second of Jack Goff's pole position time.

On top of all this, ever-changing conditions, gutsy tyre choices and enthralling battles up and down the field threw up one of the most incredible races in the storied 60-year history of the championship in just the second round of the campaign.

Donington Park is a favourite for fans and drivers alike, and the world-renowned circuit is sure to yield yet more first-rate action as the hunt for the biggest prize in British motorsport continues with Tom Ingram leading the early running. For 2018, a host of improvements have been enacted at the venue by new owners MotorSport Vision and as a result, spectators can expect a best-yet trackside experience with new grandstanding, restaurant and facilities.

Burgeoning crowds watched all of the action unfold at Brands Hatch and Donington Park is sure to see strong numbers descend to enjoy what will be a fantastic weekend's entertainment. Everything, as always, is broadcast live and free-to-air by the championship's longstanding partner ITV on ITV4, the ITV Hub and online at itv.com/btcc. Whether you're in the grandstands or relaxing in your front room, you're covered and you won't miss a second. Amid the uncertainty and competition of a BTCC weekend, the only thing you can be sure of is drama!

Fresh faces lead the way in stunning Round 2
Much of the talk leaving Brands Hatch was of that stunning second race. It was quite the spectacle as changing conditions favoured the brave. Proceedings got underway in tricky wet conditions but as the race progressed, the track surface began to dry. Ahead of time, a third of the field had taken a punt on Dunlop SportMaxx dry tyres and in the latter stages, their gamble began to pay off.

Early pace-setters – on Dunlop's BluResponse wet rubber – Tom Ingram in the Toyota, BMW's Andrew Jordan and the Honda Civic Type R of Jack Goff looked to have things under control. Within a single lap, though, it all changed with a dry line forming on the circuit.

Lap 22 was the tipping point. Aiden Moffat in the Laser Tools Racing Mercedes flew through the pack and even with a half-spin, he had the pace inherent to take the lead. Senna Proctor was close behind in his Vauxhall Astra while Jake Hill in the Team HARD VW was joined by Ollie Jackson's Audi and Tom Boardman's MG to make it five line-astern out front.

The young Scot had stolen the initiative but, contact on the exit of Druids meant he lost grasp of the lead and Yorkshireman Proctor duly took advantage. Hill and Jackson followed through past Moffat, with the trio able to break clear and cross the line as you were – meaning all three would enjoy emotional maiden podium finishes.

What made it even more incredible were their starting positions with Proctor scything through the pack from 27th and Hill 25th.

“I don’t think it’s quite sunk in yet,” said race winner Proctor. “I didn’t even know that I’d won until I pulled into Parc Ferme and realised that no one was there in front of me – it was a very surreal moment.

“I can’t thank Martin (Broadhurst – Team Manager) and the team enough for putting together an incredible package, and the decision to bring Rob Peacey (engineer) in is definitely going to stand us in good stead for the season.

“Starting at the back of the grid, being the furthest down of the nine cars that made the decision to run on slicks, we didn’t expect to take the victory, but it’s proved that we’re here to win.

“I’m looking forward to this season even more than I was before and I know that between Josh Cook (Proctor's team-mate) and I, we’ll be seeing a lot more podiums. Thanks again to all my sponsors – we literally wouldn’t be here without you.”

A revitalised Donington Park
Huge improvements have been made to the legendary East Midlands circuit over the winter months, as part of the multi-million pound investment by new owner MotorSport Vision.

One of the biggest additions is the large new restaurant, cafe and bar situated right in the heart of the paddock. Garage 39, constructed in the former Paddock Suite has been designed to be the best motorsport circuit restaurant in the country, will be open throughout the event and late into the night with entertainment, too.

Significant improvements can be found in the spectator areas as well. A huge new grandstand has been built atop a raised viewing area at Hollywood, with one of the most spectacular views of any motorsport venue in the country. Fans at the Donington BTCC round will be able to take in views of pretty much all the national circuit from the grandstand, making these very much the best seats in the house.

In several of the most popular spectator areas, large new toilet blocks have also been built, finally replacing the ageing units that had stood since the circuit’s reopening in the late 1970s. These new blocks, with improved capacity and with much better disabled and baby changing facilities can be found at Hollywood, the Old Hairpin and on the infield.

Other additions and improvements include a smartened up main entrance, resurfaced internal access roads, a brand new circuit office and a fully surfaced paddock area.

Home advantage
BTCC legend and triple champion Matt Neal pilots Halfords Yuasa Racing's all-new Honda Civic Type R (FK8) and hails from Stourbridge. He counts Donington Park as his home circuit and as is well known by now, it's a venue that holds a special place in his heart, having taken £250,000 from Series Director Alan Gow as the first Independent driver to win a race outright in the modern era.

“Donington is my home circuit," said Neal. "So, I always get a lot of friends and family coming along to support me, which is great. I have good memories there, too, which invariably gives me an extra boost going back. We learned a bit more about the new Civic Type R at Brands Hatch. It’s quite a different beast to its predecessor and we still have more work to do to fully refine it, but I’m hopeful that with its strong engine and sleek silhouette, it will prove well-suited to Donington, especially through the high-speed stuff."

It's not only Neal's back yard but Team Dynamics' too. The outfit run the Halfords Yuasa Racing operation and is itself an iconic name in the series' history. With new team-mate Dan Cammish alongside Neal for 2018, the team are keen to kickstart their year with a strong points score.

Another champion calls Donington Park home in BMW Pirtek Racing's Andrew Jordan (Lichfield). He enters the second race weekend of the year with a podium under his belt and he'll be looking for more of the same.

WIX Racing with Eurotech's Brands Hatch was a stormer, with Jack Goff notching pole, a race one win and enough points to fire him second in the Drivers' standings. Brett Smith, from Coventry, also scored a hatful of points, ensuring the Midlands-based outfit sets the early pace in the Teams' standings.

“It couldn’t have gone much better than that,” said Goff. “You never really know what to expect when it rains like it did overnight but to come away with a win from Round 1, it’s taken a lot less time than it did last year, so I’m chuffed with that. It’s all thanks to the fantastic guys here at WIX Racing with Eurotech who’ve given me a fantastic car."

Team Principal Jeff Smith added: “What an amazing way to start our 2018 campaign, pole positon and all three cars in the top ten for qualifying, followed by a great win by Jack Goff in the opener. We are looking to continue scoring results like this."

Timetable and tickets
The second race day of the 2018 Dunlop MSA British Touring Car Championship takes place on Sunday 29 April, with all three BTCC encounters – and many of the day’s other races – broadcast live and in high-definition on ITV4. Those in attendance at the circuit can stay in touch with the commentary and live timing from every session, available at btcc.net/live throughout the weekend.

In addition to the BTCC, the support series on the TOCA package are set to bring even more action to Donington Park. Sportscar racing fans will get their fix with races from the Porsche Carrera Cup GB, Michelin Ginetta GT4 SuperCup and Simpson Race Products Ginetta Junior Championship. The Renault UK Clio Cup – often seen as a stepping-stone to reaching the BTCC – will also feature on the huge bill of top-line British racing, as will the F4 British Championship, the single-seater launchpad for the next generation of aspiring Formula One world champions.

Tickets for the Dunlop MSA British Touring Car Championship’s annual visit to Donington Park on 28/29 April are available in advance from just £28 for race day and £37 for the full weekend's action, with free entry for children aged 13 and under.