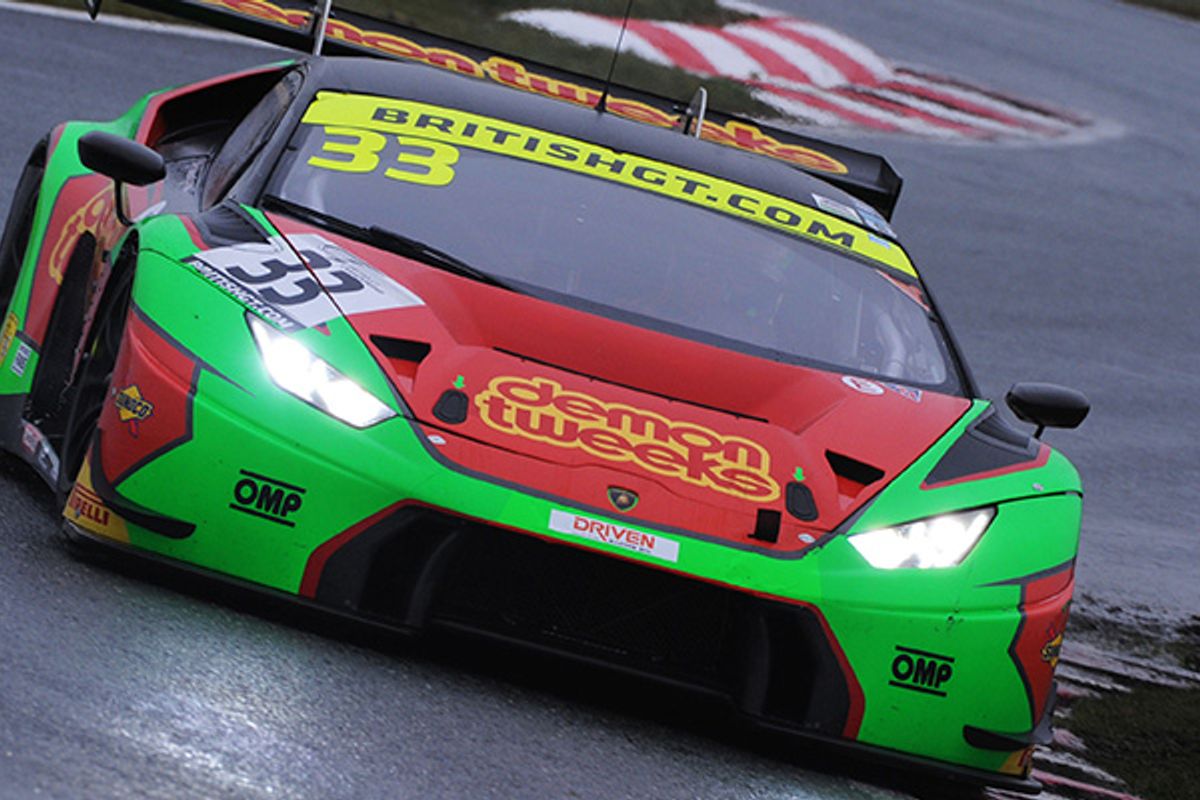 The 2018 British GT Championship blasts back into action this weekend at Rockingham where 34 cars and 10 manufacturers will be gunning for GT3 and GT4 glory.

Two soaking wet races last time out at Oulton Park resulted in history being made when Flick Haigh – supported by Optimum Motorsport co-driver Jonny Adam – become the first woman ever to win a British GT race outright. However, bad luck in the second 60-minute contest mean it’s Barwell Motorsport’s Jon Minshaw and Phil Keen who head the overall standings at this early stage.

Meanwhile, another record-equalling GT4 entry makes it impossible to pick a winner from the 22 cars and eight manufacturers on show. Track-Club and Team Parker Racing claimed a victory apiece at Oulton, but there’s no shortage of contenders waiting in the wings over the course of this year’s first points-and-a-half endurance race.

Instead, it’s history-maker Flick Haigh and her Aston Martin co-driver Jonny Adam who could be the ones to watch once again. Optimum’s pairing certainly have the pace after claiming a first and second in Oulton’s two qualifying sessions before winning Race 1, while the latter and the V12 Vantage have taken pole at Rockingham for the past two years. Add to that a success penalty-free race and it’s difficult to look beyond the #75 crew.

But one line-up keen to do just that are ERC Sport’s Lee Mowle and Yelmer Buurman who occupy second in the GT3 Drivers’ standings after a decent first weekend at Oulton. The Dutchman’s Mercedes-AMG enjoyed a particularly feisty battle with Darren Turner in the season opener, and it’s the Beechdean AMR Aston Martin he shares with two-time champion Andrew Howard that sits just a point further back in third.

Separate lap one incidents meant TF Sport’s challenge failed to materialise at Oulton, but its two Aston Martins – driven by Mark Farmer and Nicki Thiim, plus Derek Johnston and Marco Sorensen – will undoubtedly be in the hunt. Indeed, it was Johnston who partnered former TF Sport co-driver Jonny Adam to those consecutive pole positions in 2016 and ‘17.

Rick Parfitt Jnr kick-started his championship-winning campaign with victory at Rockingham 12 months ago, and the Team Parker Racing driver – along with Ryan Ratcliffe – will be desperate for a similar result this weekend. Their Bentley took just one point from its first two races of the year, while team-mates Ian Loggie and Callum Macleod are sixth in the standings after also struggling in the wet conditions. Both crews will be eager for drier weather this weekend.

Elsewhere, Shaun Balfe and Rob Bell will hope to bounce back from a turbo issue that compromised their McLaren’s first outing of 2018, Graham Davidson and Maxime Martin return for their second British GT appearance having learned plenty at Oulton, and RJN Motorsport’s Devon Modell and Struan Moore will be eager to score their first points of the season following a frustrating start over the Easter weekend.

As many different manufacturers have won the last five races at Rockingham, meaning – should that run continue – that Sam de Haan and Jonny Cocker’s Barwell Lamborghini would also be a potential victory contender after a practice accident masked their true pace at Oulton.

A curtailed second race at Oulton Park has somewhat skewed the GT4 standings, making it tricky to predict who might be on form this weekend at Rockingham.

Track-Club’s Adam Balon and Ben Barnicoat lead the way for now courtesy of Race 1 victory last time out, and the Pro/Am pairing will once again benefit from their Silver Cup rivals serving a longer minimum pitstop time. Add to that success penalties for two of their class rivals and the #72 McLaren should be a strong contender at a venue well suited to the 570S.

However, there’s no denying that Ginetta’s package also suits Rockingham where the G55 has traditionally shone. Indeed, HHC Motorsport won there 12 months ago and return fresh from a pole position and podium at Oulton Park. Its Pro/Am and Silver Cup entries also spread the team’s bets, although Mike Newbould and Will Burns will incur a 15s pitstop success penalty for finishing second last time out.

Two third places made Century Motorsport’s Jack Mitchell and Ricky Collard the most consistent performers at Oulton, and the BMW pair occupy second in the points ahead of Rockingham. This weekend sees the latter make way for full-season driver Aleksander Schjerpen, who claimed a GT4 class podium on his last visit to Corby in 2016, while Mitchell staged a heroic defence of third en route to a GT3 podium 12 months ago.

Two of Tolman Motorsport’s three McLarens feature in the current top-six, with Michael O’Brien and Charlie Fagg just nine points behind leaders Balon and Barnicoat. However, their longer minimum pitstop time should initially hand the advantage to team-mates David Pattison and Joe Osborne who, along with reigning champions Graham Johnson and Mike Robinson, plus fellow McLaren runners Track-Club, will be amongst the favourites for Pro/Am honours.

UltraTek Racing Team RJN’s two Nissan 370Zs have threatened in the past and could do so again, Academy Motorsport will be hoping to kick-start its campaign after showing flashes of pace last time out, and Equipe Vershuur will be desperate to make amends for Oulton’s qualifying mix-up that saw its McLaren lose both pole positions.

Sunday’s two-hour race will be streamed live on the championship’s Facebook page and website, as well SRO’s GT World Youtube channel. But remember: nothing beats actually being there! Tickets can still be purchased in advance at www.rockingham.co.uk.