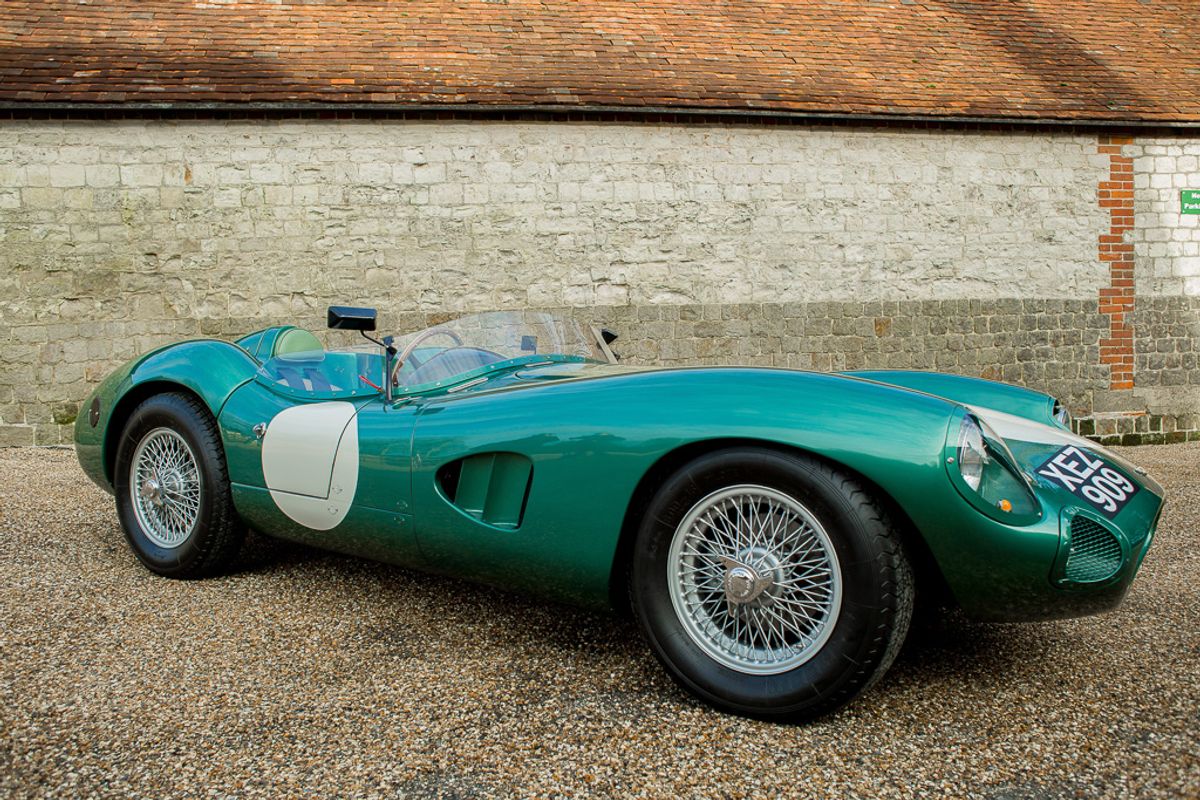 Rare recreation of 1950’s Aston Martin racing legend the DBR1 for auction
Built by ‘Wheeler Dealers’ presenter Ant Anstead’s Evanta Motor Company
To be auctioned at Silverstone Circuit on 19th May estimated at £85,000 - £100,000

Silverstone Auctions has announced that a very special Evanta Aston Martin DBR1 is coming to its May Sale on 19th May at Silverstone racing circuit.

Built as a near exact replica of the original Aston Martin DBR1, famed for its success during the late 1950’s in the hands of legends including Sir Stirling Moss and Carroll Shelby, the stunning recreation was crafted from scratch by the Evanta Motor Company, owned at the time by car designer and ‘Wheeler Dealers’ presenter, Ant Anstead.

The car comes to auction from the private collection of a high profile celebrity petrolhead with an auction estimate of £85,000 to £100,000.

Nick Whale, managing director, Silverstone Auctions said; “The Aston Martin DBR1 is an icon in British motor racing history, and this is one of the best replicas we’ve seen. This Evanta is a very special motorcar with unique provenance and offers exclusive and seriously cool summer motoring.”

The creation of the car was based on over 150 photographs of an original Aston Martin DBR1 with special attention to recreating the absolute correct Aston Martin Racing Green body and correct colour for the frame.

Inside the cockpit the car is almost indistinguishable from the original cars, even down to the hand painted crackle finish dashboard, which took dozens of attempts until a satisfactory finish was achieved. The seats were also made in the same materials as the original cars, whilst the period correct dials and steering wheel were fitted to retain authenticity.

Under the bonnet the Evanta DBR1 is currently fitted with a high compression 4.2 litre engine with de-Dion rear suspension and coil over front wishbones at the front, with 16” wire wheels fitted with special period reproduction Michelin tyres.

Silverstone Auctions was honoured to sell the car in 2014 to a known enthusiast and collector. The car returned to auction again in February 2016 and sold to its current owner, a high profile celebrity petrolhead, who has made a number of further mechanical enhancements to the car.

“The true value of a genuine DBR1 is believed to be in the region of £20m, making this Evanta DBR1 the closest many collectors can get to owning the legendary racing car. It’s an opportunity not to be missed!” concludes Nick.

Designed and built by Aston Martin in the late 1950s, the DBR1 and DBR2 were legendary sports racing cars built primarily for the 24 Hours of Le Mans and other high profile sports car races of the period in both Europe and the USA.

They were particularly successful in the hands of both Innes Ireland, who won the Daily Express Trophy at Silverstone, and Sir Stirling Moss who finished second at Spa but went on to win both the British Empire Trophy at Oulton Park and the Sussex Trophy at Goodwood. Across the Atlantic, the car won at Lime Rock and Marlborough in the hands of George Constantine, before Carol Shelby and Roy Salvadori sealed the car's legendary status by winning Le Mans outright in 1959.

They were regarded as stunning looking and highly evocative of the era and today no-one truly knows the value of an original DBR1 or DBR2. In 2012, DBR1/2 'XSK 497'was reputedly sold for £20 million and it is likely today that they are amongst the world's most valuable racing cars.

So this particular car, which was built in 2013 by the highly respected Evanta Motor Company, owned at the time by car designer and presenter of "Wheeler Dealers", Ant Anstead, is an exciting and rare opportunity. The original owner of this car took over 150 photographs of the real car and considered 15 different Pantones before selecting the closest colour to Aston Martin Racing Green and the correct 'duck egg' colour for the frame.

The car is fitted with de-Dion rear suspension and coil over front wishbones, along with disc brakes all round, 4-pot Girling front calipers and 2-pot rears. The 16" wire wheels are shod with reproduction period Michelin tyres and the car is now powered by a Jaguar 4.2 high compression engine. The gearbox is a Getrag 5-speed which now has to handle 203.4BHP and 291lbs ft of torque, according to the dyno sheet in the car's history file.

Silverstone Auctions sold this car in May 2014 to a known enthusiast and collector who enjoyed it immensely, but wanted a better power plant than the original second hand 3.8 and so bought a special new 4.2 high-compression engine which was built, fitted and set-up at a cost in excess of £14,000.

In February 2016 we were privileged enough to sell this car again to the current owner, who is a high profile celebrity petrol-head. Under his dutiful ownership, he has commissioned some recent expenditure to keep the car to his exacting standards. The rev counter was replaced along with the steering wheel quick release boss, sealing washers on rear oil pipe feed, cam cover gaskets, and the exhaust manifold gaskets. Furthermore, the throttle pedal was re-engineered and new throttle cables fitted at the same time. The ignition timing was checked and finally, the carburettors were balanced and reset.

This is a very special motorcar with unique provenance and offers exclusive and 'seriously cool' summer motoring.