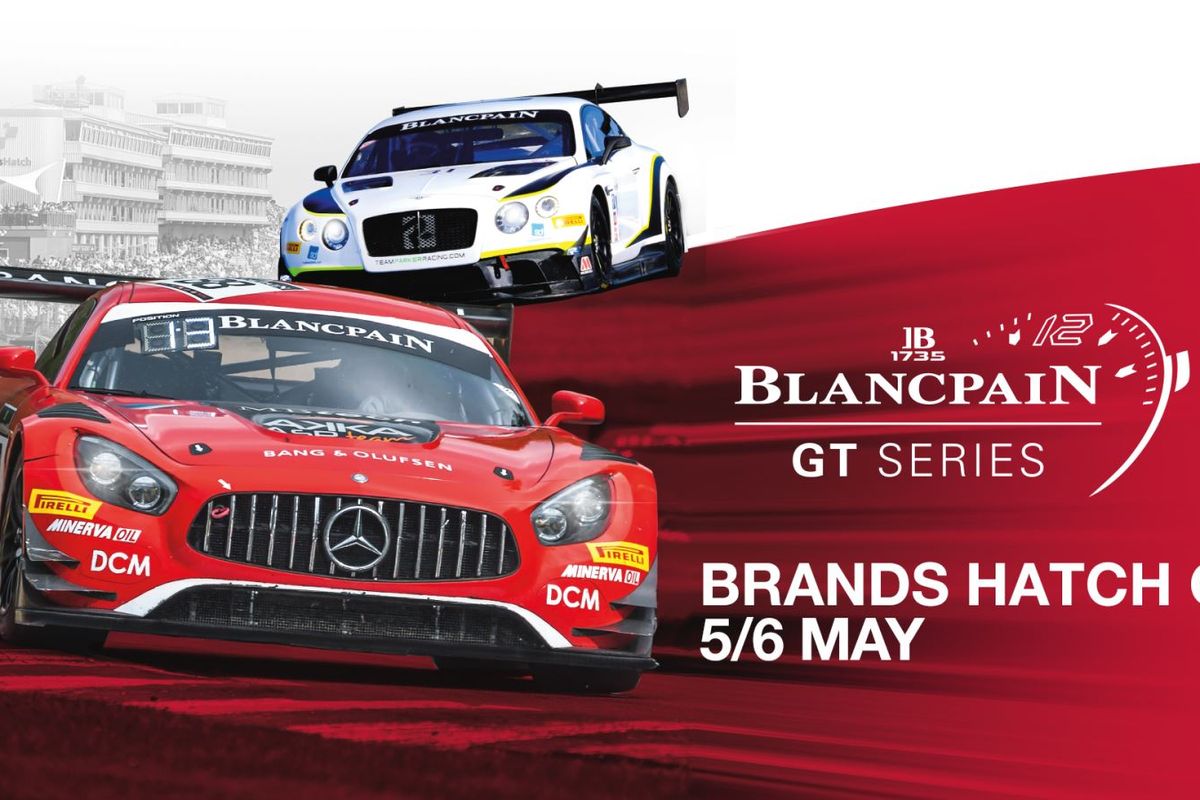 Battle resumes in the Blancpain GT Series next weekend (5/6 May) when the high-speed Brands Hatch circuit plays host to a double-header event.

A field of 22 cars will tackle the 3.9km GP course at the Kent track, located just 20 miles from central London, in what will be the third meeting of the 2018 season and the second on the all-action Sprint Cup schedule.

The fast and undulating Brands Hatch circuit has witnessed some memorable on-track battles since becoming part of the Blancpain GT Series calendar in 2014. With three classes vying for every inch of tarmac, another fiercely contested weekend of racing is in store at the British venue.

Belgian Audi Club Team WRT will bring the biggest Pro contingent to Brands Hatch. The Badour-based squad will field four cars at the British venue, with at least three of those vying for top honours in the premier class.

The team’s #1 Audi R8 LMS was victorious in last weekend’s Endurance Cup season-opener at Monza, with Dries Vanthoor, Christopher Mies and Alex Riberas steering the Audi to victory. Mies and Riberas resume Sprint Cup duties aboard the #1 machine at Brands Hatch, while Vanthoor returns to the #2 car to once again link up with Will Stevens.

WRT can call upon a third Pro class entry, the #17 Audi R8 LMS, which sees reigning Sprint Cup champions Robin Frijns and Stuart Leonard looking to kick-start their title defence. The team’s #3 machine will also compete, with its drivers and class set to be confirmed in due course.

WRT have a strong record at Brands Hatch. In 2016 Mies partnered with Enzo Ide to clinch victory in the main race, while the pairing of Frijns and Laurens Vanthoor were dominant in 2015, taking wins in both the qualifying and main race.

Their confidence will be high following victory at Monza, a circuit on which the Audi R8 LMS was not considered a serious contender, placing Vincent Vosse’s squad among the favourites at Brands.

But there is no room for complacency. The WRT crew know that stiff opposition awaits from GRT Grasser Racing Team, who swept the Brands Hatch weekend last year thanks to eventual overall champions Mirko Bortolotti and Christian Engelhart.

The Austrian squad return this season with a trio of their Lamborghini Huracan GT3s. Bortolotti and Engelhart are once again aboard the #63, with Ezequiel Perez Companc and Andrea Caldarelli taking the controls of the #19. Their roster is completed by Loris Hezemans and Franck Perera, who will handle the #82 car.

The Grasser outfit know how to win at Brands. As well as their dominant showing in 2017, the team also swept the inaugural Blancpain GT Series event at the circuit in 2014, when Hari Proczyk and Jeroen Bleekemolen took a double win. They will expect to be among the front-runners once again this weekend.

Attempto Racing will travel to Brands Hatch on a high. The team’s #66 Audi R8 LMS scored a memorable victory in race two at Zolder, followed by a strong run to sixth at Monza. Steijn Schothorst and Kelvin van der Linde will be targeting another trip to the podium in the #66 machine, while Pieter Schothorst and Pierre Kaffer will be hoping to emulate them in the #55.

Emil Frey Lexus Racing continue their full-season assault on the Blancpain GT Series at Brands Hatch. This new partnership is being built on stable foundations, with the established line-ups of Albert Costa and Christian Klien in the #14 Lexus RC F GT3 and Stéphane Ortelli paired with Norbert Siedler in the #114 car. The team will be targeting a breakout result at the British venue as they continue to learn about their new equipment.

French effort AKKA ASP Team make the trip across the Channel to field four cars at Brands Hatch, with two competing in the Pro class. Regular drivers Raffaele Marciello and Michael Meadows will share the #88 Mercedes-AMG GT3, while Nicolas Jamin and Felix Serralles will steer the #87 car.

The Pro contingent is completed by the Audi R8 LMS of Sainteloc Junior Team. The French squad will field their #25 car for Simon Gachet and Christopher Haase at Brands Hatch, completing a highly competitive grid for the top class.

The Silver Cup class looks set to once again produce a competitive set of races at Brands Hatch, with a pair of Mercedes-AMG GT3s run by AKKA ASP Team among the leading challengers. The #90 of Nico Bastian and Jack Manchester has been consistent in its performances this term, scoring class podiums at Zolder and Monza. They will now be targeting the top step at Brands.

The second AKKA ASP car will run under the SMP Racing banner, with the #35 Mercedes-AMG GT3 driven by Vladimir Atoev and Alexey Korneev. Both showed impressive one-lap speed at Zolder and will now be hoping to convert this into a class victory.

Team Parker Racing are set to bring an expanded line-up to their home event. In the Silver Cup, the British squad will once again run the #31 Bentley Continental GT3 for Joshua Caygill and Aron Taylor Smith, who are targeting a maiden class podium at Brands Hatch.

3Y Technology complete a competitive Silver Cup field with their BMW M6 GT3. As was the case at Zolder, the French squad’s entry will be driven by Lukas Moraes and Andrew Watson.

The Pro-Am category will see four high-quality entries, all of which are capable of contending for the class victory at Brands Hatch.

Going on past showings, the favourites must be Michael Broniszewski and Toni Vilander aboard their #11 Kessel Racing Ferrari 488 GT3. The Polish driver was class winners at Brands Hatch in 2016, a result that set him up to take that year’s Blancpain GT Series Pro-Am title.

But there will be stiff opposition from the sister Ferrari 488 GT3 of TP 12-Kessel Racing. The pairing of Piti Bhirombhakdi and Carlo van Dam took home both race wins at Zolder and will travel to the British venue confident of emerging victorious from this intra-team contest.

The #26 Sainteloc Junior Team Audi R8 LMS of Nyls Stievenart and Markus Winkelhock will also be hoping to reach the top step of the podium. 18-year-old Stievenart is adding experience to his game and could ask for no better tutor than multiple Blancpain GT Series race winner Winkelhock.

Finally, Silver Cup regulars Team Parker Racing have added an additional Continental GT3 to the Pro-Am grid for Ian Loggie, with a second driver for the #32 machine set to be announced in due course. This should ensure a highly competitive battle for Pro-Am honours at the British circuit.

The Brands Hatch event will consist of two 60-minute races, each awarding the same number of championship points. Qualifying takes place on Saturday at 16.00 local time, with the races set to get under way on Sunday at 12.00 noon and 16.30.