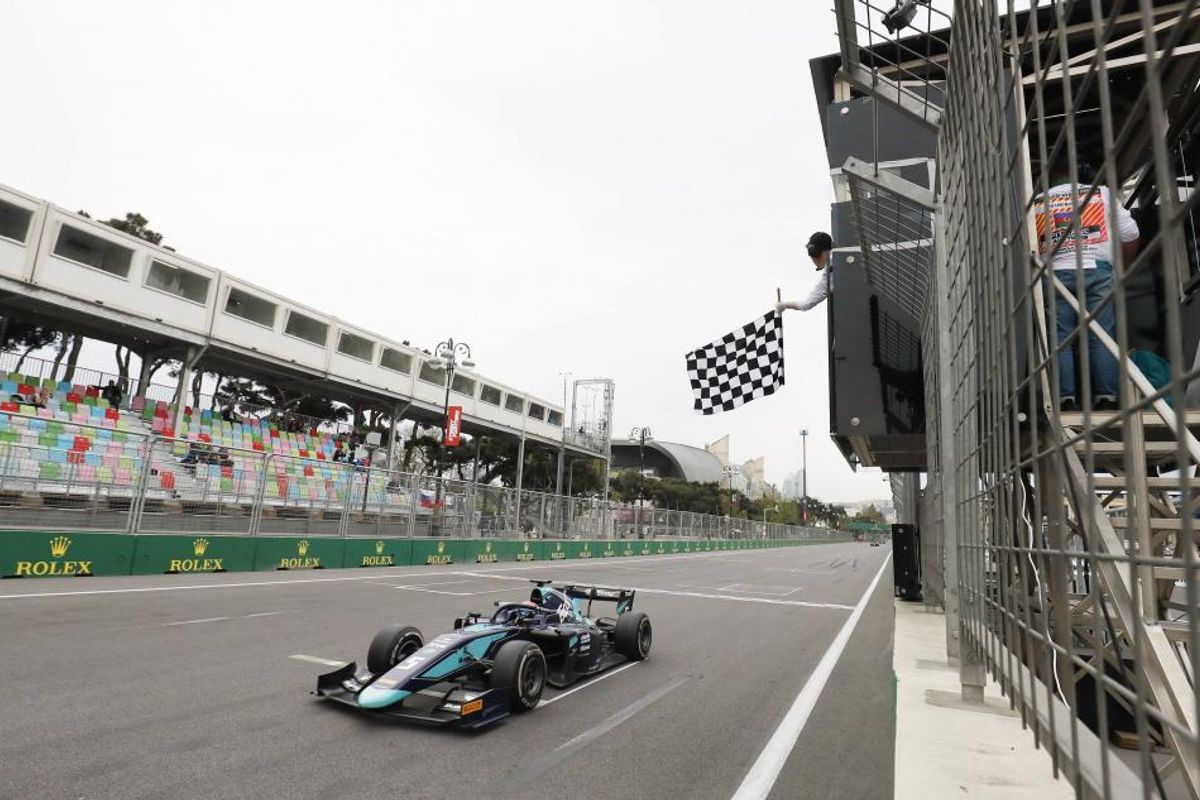 Alexander Albon rose through a chaotic FIA Formula 2 Championship Feature Race at Baku, Azerbaijan to claim his first victory in the category. The DAMS driver converted his pole position into a win, keeping a cool head amid the mania to stand on the top step of the podium, 1.9s ahead of ART Grand Prix’s Jack Aitken and Antonio Fuoco of Charouz Racing System.

On a windy, overcast day on the Baku City Circuit, Albon was left with the front row to himself after Lando Norris stalled on the formation lap, the Brit joined by fellow staller Tadasuke Makino in starting from the pitlane.

When the lights went out, Albon was immediately harried by George Russell, who had torn alongside the Thai driver to briefly clinch the lead into turn 1. The ART driver was unable to keep the advantage however, and Albon hit back to return to the front. Meanwhile, Aitken had stalled off the line along with Roberto Merhi, and the pair were hastily wheeled back to the pitlane to get going once more.

Towards the end of the opening lap, Luca Ghiotto ran wide at Turn 16 and careened into the wall, bringing out a safety car to clear the Campos Vexatec Racing driver’s stricken car from the road. The race restarted on lap 5 and Albon held the lead from Russell’s advances into the first corner, continuing to defend his position on the subsequent laps. The pair then diverged in their strategic choices, Russell electing to pit at the end of the sixth lap while Albon stayed out.

Stopping one lap later proved costly for Albon, who cycled out behind both Russell, Nyck de Vries and a rapid Roy Nissany, who had climbed all the way up to the front of the pack following his Campos teammate’s crash. With the net lead, Russell set about building a break over the rest of the pack, setting numerous fastest laps to put some distance between himself and de Vries.

Eventually clearing Nissany, Albon climbed back up into third place, but was already some six seconds adrift of de Vries ahead. Although the PREMA driver attempted to close in on Russell, the leader was able to keep the Dutchman at arm’s length with a five second advantage. A second safety car brought the trio all back together, as Nissany found the wall on the exit of turn 4 just after successfully defending fifth place from Artem Markelov to compound the Campos team’s misery.

Once the wreckage was cleared from the circuit, the race was restarted on lap 21 and a flurry of chaos ensued; Russell and de Vries both braked deeply into the first corner – the former narrowly missing the wall – as Albon also went wide, allowing Fuoco to snatch the lead. While de Vries and Russell haemorrhaged positions, Albon managed to slot in behind Fuoco for second as Sergio Sette Camara assumed third, before being cleared by a charging Aitken.

Markelov - who had also braked too deep at the first corner at the restart - filled the Baku streets with plumes of smoke after his engine expired, meaning that Albon was able to close on a cautious Fuoco and reclaimed the lead on the 25th lap, building enough of a lead to deny the Italian driver the use of DRS. Scampering into a secure lead, Albon was able to take it a little more easily on the final lap to clinch his maiden Formula 2 win, as Aitken cleared Fuoco on the penultimate lap with a patient move at turn 3. Fuoco claimed Charouz’s first points and podium with third, finishing well ahead of fourth-placed Sette Camara.

Nicholas Latifi recovered from the back of the grid to take fifth ahead of Norris, who put his early stall behind him to finish within a second of the Canadian driver. Ralph Boschung and Merhi secured a double-points result for MP Motorsport, as Makino and Sean Gelael completed the top 10.

Tomorrow’s sprint race will take place at 13:10pm local time, with an all-MP front row as Merhi will start from reverse-grid pole. The local winds are also expected to pick up, which could magnify the challenge of the Baku City Circuit further in Sunday’s race.