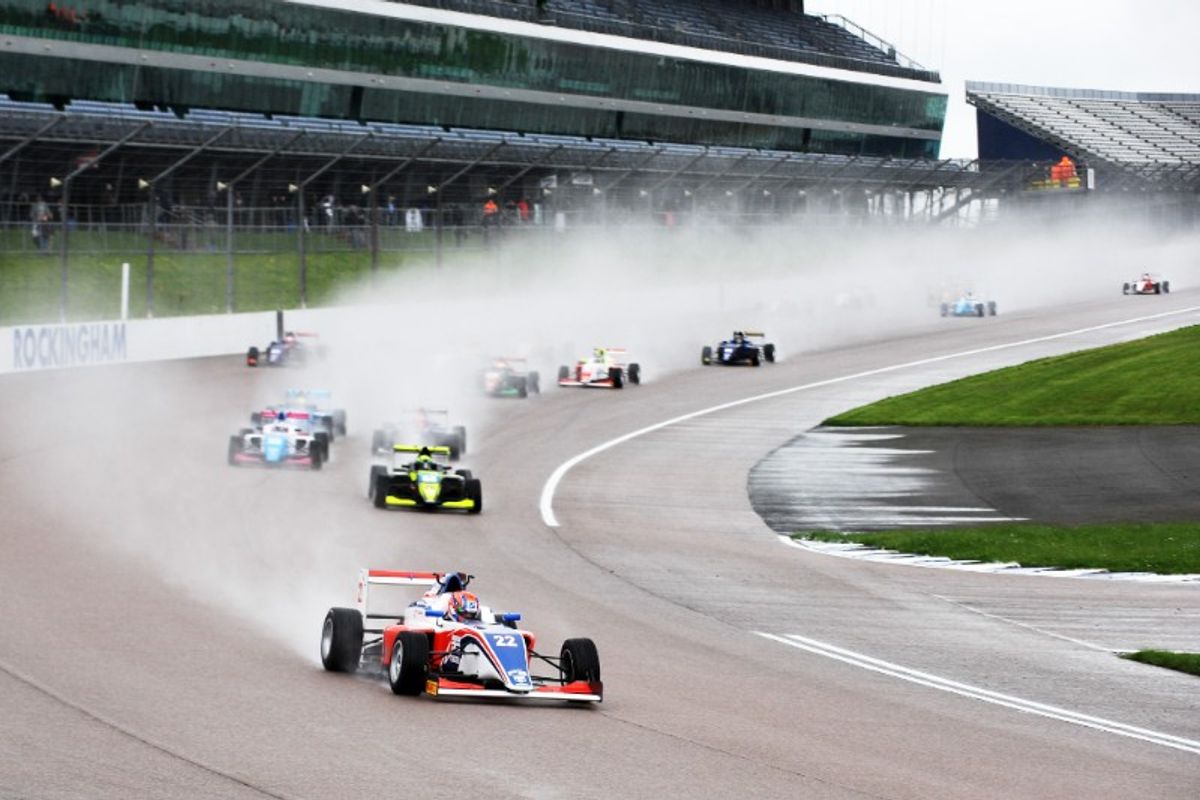 Tom Gamble claimed his maiden single seater victory at a wet Rockingham Saturday afternoon, and in doing so, surged into the lead of the 2018 BRDC British F3 Championship standings.

From pole position, the 16-year-old Fortec Motorsports driver made a great start, built a lead, had it wiped out by an early safety car, and then rebuilt a gap to secure victory by over two seconds.

Linus Lundqvist claimed second place, ahead of Jordan Cane, while there was drama on the first lap which accounted for early championship leader Nicolai Kjaergaard and several others.

Pole had been closely fought throughout the session between Jamie Chadwick, Cane and Lundqvist, with the Swede seemingly on course for his first British F3 pole before Gamble's last minute effort saw him secure pole by just 0.015s.

Double R's Lundqvist in second was just a further 0.030s ahead of Clement Novalak, with Chadwick settling for fourth in the end, but again just 0.093s from Novalak. 0.138s covered the top-four.

Cane was fifth for Douglas Motorsport, and 0.059s ahead of Lanan Racing's Kush Maini. Krish Mahadik in seventh was a quarter of a second faster than Fortec's Manuel Maldonado with Sun Yue Yang and Hillspeed's race debutant Jusuf Owega completing the top-10.

Then-championship leader Kjaergaard meanwhile had a difficult session, and could only manage the 12th quickest time.

The first half of the session was dominated by Douglas duo Chadwick and Cane, with the pair exchanging fastest time in the opening 10 minutes, while Novalak and Lundqvist also took turns at the top.

Lundqvist had just gone fastest when the red flags came out to recover the stranded car of Arvin Esmaeili, who was stuck in the gravel at Chapman Curve, while Novalak had pitted moments before to change his front wing.

The session resumed with five minutes on the clock, and Chadwick was the first to post an improved time, going within 0.150s of Lundqvist's best effort, with the Swede seemingly on course for pole. With moments remaining, the freshly re-winged Novalak popped up into third, but it was Gamble who stole the headlines, taking a last gasp pole by the narrowest of margins.

Race one
Starting from pole, Gamble made a great start and was never seriously challenged, despite an early safety car intervention after several cars went off on the first lap. Lundqvist claimed second to bolster his championship challenge with Cane third.

Mahadik was fourth for Double R Racing, ahead of Fortec's Maldonado, with Carlin's Sun Yue Yang completing the top six. Maini climbed through the order after an early pit stop to claim seventh for Lanan Racing, with Hillspeed debutant Owega taking a strong eighth on his race debut. Chadwick (Douglas) and Chia Wing Hoong (Chris Dittmann Racing) completed the top-10.

Gamble's start laid the foundations for his race. The Brit made the best start and had pulled several car lengths clear of Lundqvist by the time the pack reached the tight Deene hairpin.

With treacherous track conditions, there were numerous casualties as Chadwick, Arvin Esmaeili, Clement Novalak, Kjaergaard and Maini all found trouble. Kjaergaard, heading into the race as championship leader was out on the spot after sustaining damage while taking avoiding action, as was Esmaeili, while Novalak pitted into retirement at the end of lap one with front and rear damage. Maini was also an early pitter to replace a front wing while Chadwick resumed at the back.

Gamble held a 1.2 second advantage over Lundqvist at the end of the first lap, with Cane in third ahead of Mahadik, Maldonado and Owega. With cars stranded, a safety car period was necessary, wiping out his lead.

The race resumed at the start of lap five, and Gamble pulled out a lead once more of around a second over the first racing lap from Lundqvist. The early top-10 included debutant Josh Mason who was running ninth, and taking advantage of the first lap incidents to run high up the order.

Gamble's lead continued to increase steadily, at around half a second a lap. Starting the last lap he held a margin of almost three seconds, and claimed the flag 2.3 seconds ahead of Lundqvist, who was 6.6 seconds clear of Cane in third.

With the drivers immediately behind the top three remaining static, Mahadik and Maldonado holding fourth and fifth throughout, there was still time for late drama as Owega slipped from sixth to eighth on the last lap, benefiting Yang and Maini, but still claiming a very strong result on what has been an impressive weekend so far for the German driver, while Mason slipped out of the top-10 late on with an off at Tarzan which left him stranded in the gravel.

There was better luck for Mason's Lanan team mate Maini though, with the Indian climbing through the order after his opening lap issues to take seventh, with several moves in the closing laps, while Chadwick's ninth was a decent recovery from her early troubles too.

Billy Monger was running 10th after the first lap, having started at the back following an incident on the formation lap, but pitted at the safety car restart to repair damage sustained on the first lap, putting him a lap down.

The top-three drivers were presented with their trophies on the podium by GT racer and BRDC member Ben Barnicoat.

Speaking after the race, Gamble commented: “To get pole for race one and to convert that to a win is awesome and a great way to start the weekend. We came very close at Oulton Park and our wet pace has been really strong in testing, we showed that at Oulton and after qualifying we knew the win was possible if we made a good start.

“With the spray from my car, it was going to be difficult for the drivers behind to make a move. We got an amazing start as well which helped but the safety car came out which was a bit of a nightmare but I was able to maintain the gap to Lundqvist behind me and pulled away at the end.

“I led a championship for a long time last year, and won it, so I’m used to the pressure of being a championship leader and we’ll have to see how tomorrow goes with the reverse grid.”