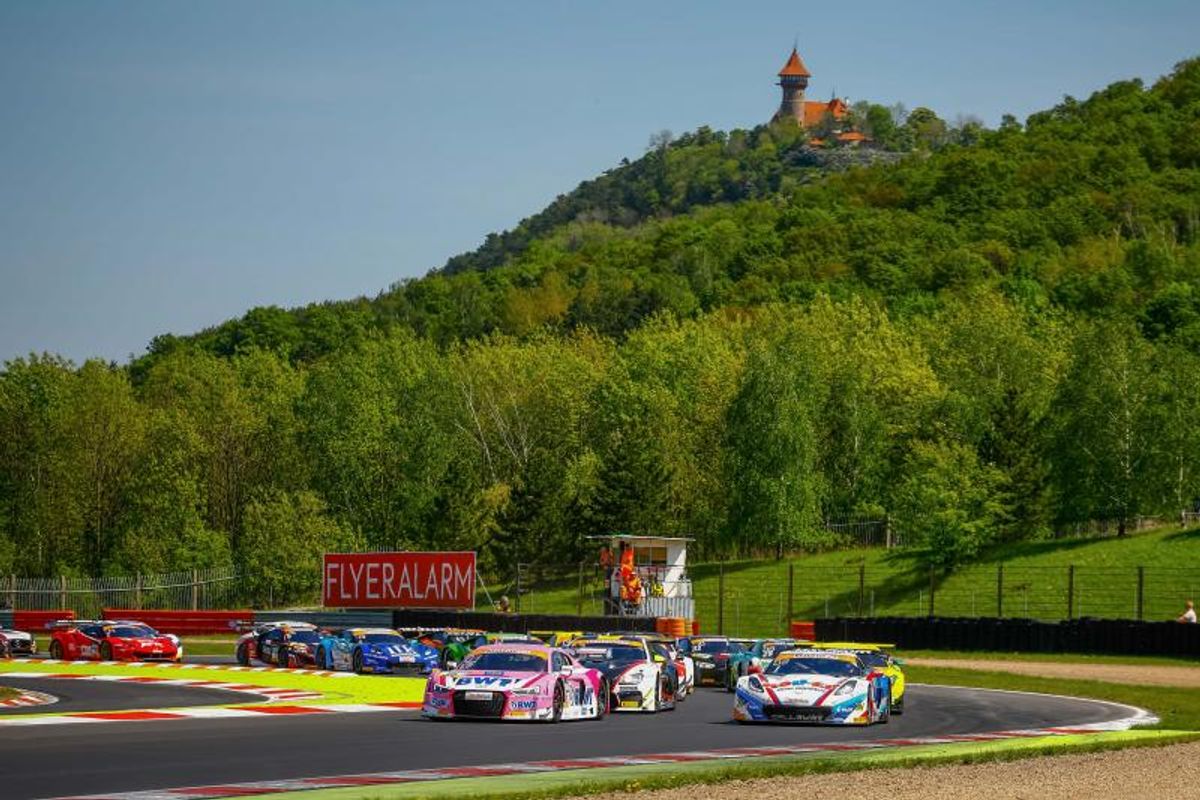 Jeffrey Schmidt (24, CH) and Stefan Mücke (36, GER, both BWT Mücke Motorsport) have registered a first ever victory in the ADAC GT Masters. The Audi duo won the Saturday race on the circuit at Most, where the Super Sports Car League was being hosted by the Czech Republic for the first time. Second place went to the Corvette C7 GT3-R driven by Marvin Kirchhöfer (24, GER) and Daniel Keilwitz (28, GER, both Callaway Competition). P3 for Robert Renauer (33, GER) and Mathieu Jaminet (23, FRA, both Precote Herberth Motorsport) was enough to lift them to the top of the championship standings. "I'm absolutely speechless," said winner Stefan Mücke afterwards. "To have won in such a competitive field is absolutely amazing, especially when you manage to do it as a member of your own team."

Schmidt and Mücke in control

While Jeffrey Schmidt as first ever pole-setter at this inaugural meeting in Most successfully defended his lead at the start, things were getting very hectic behind him. Christopher Zöchling (30, AUT, MRS GT-Racing) took P2 from Marvin Kirchhöfer in the BMW M6 GT3, while further down the field, several cars collided in Turn 2, causing the safety car to come out briefly. Schmidt pulled out a small lead on Lap 4 when the race was restarted. He was ahead by almost two seconds when he eventually handed the car over to co-driver Stefan Mücke, who comfortably remained ahead and extended his cushion in P1 to more than five seconds at times. He crossed the finish line 4.3 seconds up on Kirchhöfer and Keilwitz. For Jeffrey Schmidt and Stefan Mücke, this was their maiden victory in the ADAC GT Masters and the third overall for their team, BWT Mücke Motorsport. Schmidt also won the Pirelli Junior classification.

The Corvette pairing of Kirchhöfer and Keilwitz took second place to claim a podium for the first time this season. They had been in third place for the opening stint of the race but improved to take P2 during the round of pit stops. Coming home in third place, Porsche drivers Robert Renauer (33, GER) and Mathieu Jaminet (23, FRA, both Precote Herberth Motorsport) not only clinched their first podium of the year but also took over at the top of the standings thanks to their two Top Five finishes in the season opener at Oschersleben.

Jeffrey Schmidt (BWT Mücke Motorsport, Audi R8 LMS): "What a perfect day! It's just indescribable. I've been working towards this first victory for a long time now. I came quite close on a couple of occasions in 2017, but now the moment has finally arrived. Many thanks to the team and Peter Mücke for making sure that our preparations for the season worked out so well. Winning is never easy, even though it may have looked like that today. The start was a bit dicey, but I got a push from the BMW on the straight which meant I was as fast as the Corvette. Keeping the lead from pole position was the key to our victory."

Stefan Mücke (BWT Mücke Motorsport, Audi R8 LMS): "Jeffrey clearly laid the groundwork for our win with his lap in qualifying. He did a great job. We hadn't expected to be in contention for pole position here. He got off to a good start and pulled out a small gap. We then had a good pit stop. After that, I tried to increase the lead, as the tyres were new to me and I didn't quite know how they would hold up in the final stages. But we saw it through to the end. I am so happy. To score a first victory with your own team is really something special."