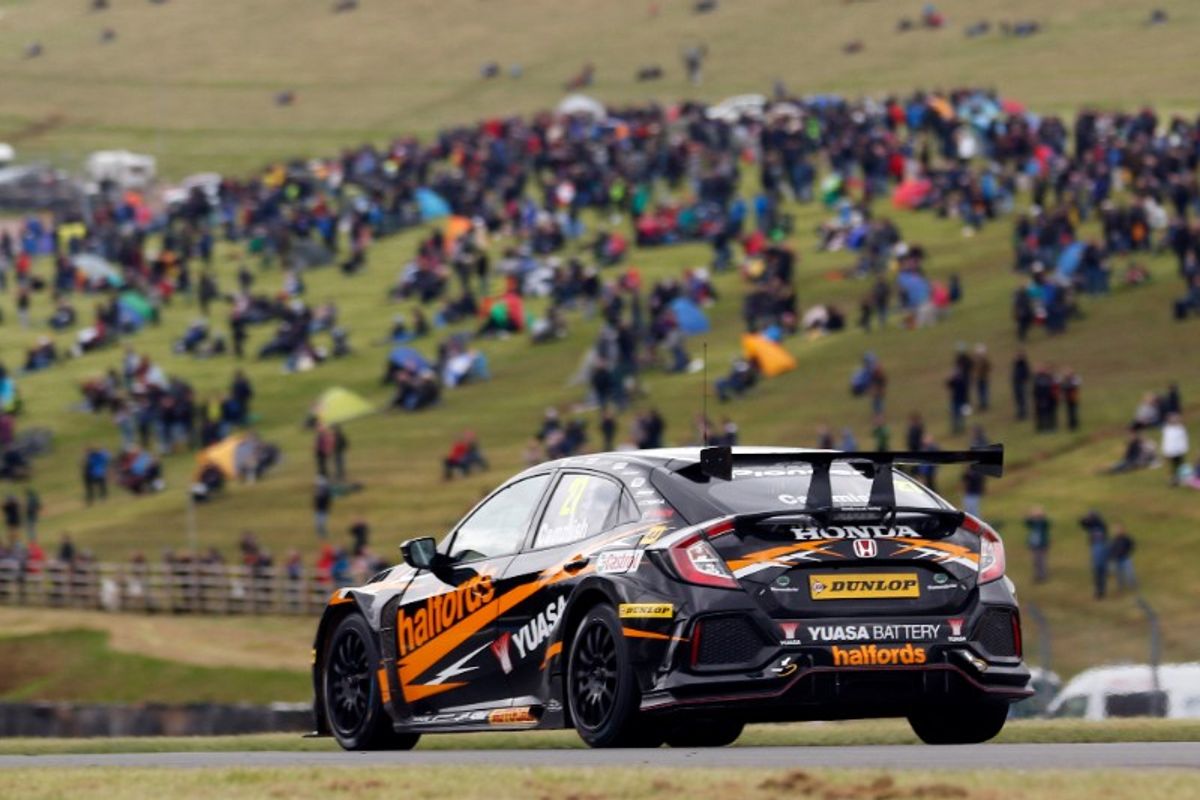 Fastest out-of-the blocks in free practice, Cammish mastered changeable weather in qualifying to place his Honda Civic Type R (FK8) fourth on the starting grid amongst the 32 high-calibre contenders for race one. After gaining a spot at lights-out, the Halfords Yuasa Racing new boy then stole second at the end of the opening lap with a neat dive up the inside into the chicane. It was a position he would retain to the chequered flag.

The two-time Porsche Carrera Cup GB Champion subsequently defied 66kg of success ballast and the less favourable hard-compound tyres in race two to lead until mid-distance. Although ultimately and ineluctably forced to concede ground as lighter rivals closed onto his tail, he clung on as well as he could and fended off late pressure to cross the finish line fourth.

Cammish looked to be on-course to make it a hat-trick of top five finishes in race three when contact heading down the Craner Curves as he duelled for fourth broke his wheel rim. The 29-year-old’s strong results from earlier in the day have nonetheless vaulted him up the championship order from 16th into seventh, while maintaining his advantage in the Jack Sears Trophy standings.

Competing at his home circuit, team-mate Matt Neal’s weekend was conditioned by qualifying, with the three-time BTCC Champion unable to better 17th on the grid in a topsy-turvy session.

Undeterred, like Cammish, he showcased the pace and prowess of the new Civic Type R to scythe through to sixth in the opener. While race two was more of a struggle on the hard-compound rubber – yielding 16th place, just outside the points – the local hero bounced back in fine style in the finale to battle his way to seventh, in so doing gaining five spots in the title table.

In similar fashion, Honda has almost halved its deficit to the top of the Manufacturers’ classification, with Halfords Yuasa Racing leapfrogging from 13th up to fourth in the Teams’ Championship ahead of the next outing at Thruxton in Hampshire on 19/20 May.

Dan Cammish:
“It’s been a good weekend – almost a very good weekend. We showed our speed in free practice and qualified well in what were very difficult, greasy conditions. It was obviously fantastic for both the team and myself to achieve our first podium of the season in race one, although I would say as a performance, race two was arguably even better, with 66kg of ballast on-board and the harder tyres. I tried to get away as fast as I could, but it was inevitable that the guys behind would catch up eventually and we were over-the-moon to lead for so long and still finish as high as fourth – the car balance felt really good and the Civic Type R handled extremely well. What happened in race three was just very unfortunate; it was only the lightest of touches, but it caused my wheel rim to shatter and that in-turn punctured the tyre. We were on for at least another top five result, but we can nonetheless go away feeling happy. People were asking pre-season if I would get properly stuck in and get my elbows out in the BTCC, and I think I’ve proven here that I can do that as well as anybody else.”

Matt Neal:
“Unfortunately, my weekend began on the wrong foot in lining up 17th on the grid, which left me with a lot of work to do in the races. We are still learning with the new Civic Type R and it’s not totally dialled-in yet in those conditions, which meant qualifying was almost akin to a test session for us. It was tricky out there, and it didn’t play out in my favour. We were quick in races one and three and the car felt really good. There was plenty of chaos kicking off, but we managed to avoid it all to come through the field for a couple of solid points-scoring results. In race two, I made a good start but got a bit hung out to dry around the opening laps as I tried to steer clear of the carnage, and on the hard-compound tyres, it was always going to be difficult to fight back from that. Still, it was a much more positive outcome than at Brands Hatch and we remain light going next to Thruxton, which has traditionally been a happy hunting ground for us and will be an important weekend as both Honda and Yuasa’s home circuit.”