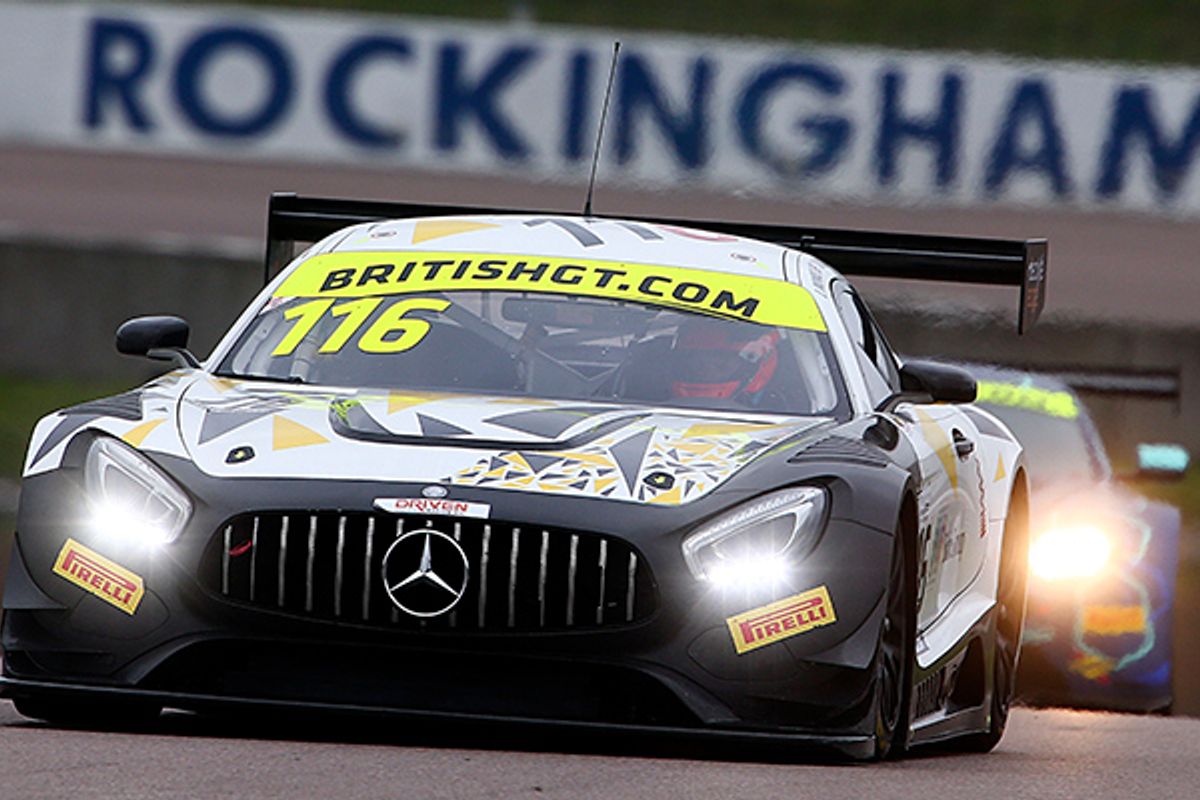 Four Safety Car periods and a slew of penalties helped ERC Sport’s Lee Mowle and Yelmer Buurman emerge victorious from a typically action-packed British GT encounter. The pair were joined on the podium by TF Sport’s Derek Johnston and Marco Sorensen – who were subsequently penalised 30s post-race – as well as Team Parker Racing’s Ian Loggie and Callum Macleod, although any number of crews could and probably should have featured on the rostrum.

Haigh’s excursion at Tarzan just after the restart promoted Graham Davidson – flying in the Jetstream Aston Martin that started ninth – to third behind De Haan. The pair remained in that order until after the second caution period, required while David Pattison’s beached Tolman McLaren was retrieved, when Davidson dived down the inside at Deene.

The Scot then went after Minshaw who, having established a 10s lead before the second Safety Car, was unable to replicate that same pace thereafter. And although the Aston Martin was unable to find a way past, it was perfectly placed to inherit the lead during the pitstops when the #33 Lamborghini served its additional 20s success penalty for winning at Oulton Park.

Davidson’s co-driver Maxime Martin duly re-joined 15s ahead of Phil Keen, an advantage that was swiftly wiped out by the day’s third and fourth Safety Car periods in quick succession. But when the race went green for the final time Jetstream’s V12 Vantage was pinged for multiple track limits violations and had to serve a drive-through penalty.

That should have handed Barwell’s #33 Lamborghini the lead. However, just before Martin pitted, Keen was passed by Buurman whose co-driver Mowle had kept the AMG in contention throughout the opening stint while rivals faltered. Indeed, the Mercedes found itself seventh at half-distance after an electrical glitch stymied Mark Farmer’s Aston Martin, Derek Johnston received a drive-through penalty for contact, and Rick Parfitt Jnr was spun around. Buurman maintained the charge thereafter and was perfectly placed to benefit after also passing Darren Turner.

But while the race had come to ERC Sport, it was getting away from Barwell whose challenge faltered at the pitstops. First, De Haan’s Huracan – due to inherit second place – was retired with a clutch problem before co-driver Jonny Cocker had a chance to re-join. The pitstops also put paid to #33’s second place when Race Control handed Minshaw and Keen a subsequent 10s stop/go penalty for an infringement.

That gave Buurman a reasonably straightforward run to the chequered flag, which he took 4.3s clear of TF Sport’s Sorensen. However, the Aston Martin – which had already been handed a drive-through penalty for contact – ultimately had another 30s added to its race time as a direct result of spinning Parfitt Jnr out of fifth midway through the opening stint.

Team Parker Racing’s Ian Loggie and Callum Macleod therefore moved up one place to second in the final standings after the latter finally overhauled Beechdean AMR’s Darren Turner on the penultimate lap. Turner and Andrew Howard were third ahead of Haigh and Optimum co-driver Jonny Adam, who was also in hot pursuit of the podium places during the second stint.

Martin and Davidson recovered from their drive-through penalty to finish sixth on the road but fifth in the final result, while the latter’s charge from ninth to second earned him Blancpain’s Driver of the Day Award. Keen was just 0.2s behind at the finish and close enough to salvage sixth for Barwell after a tough raceday at Rockingham.

Johnston and Sorensen slotted into seventh, finishing ahead of Ryan Ratcliffe and Parfitt Jnr’s delayed Bentley which completed the classified GT3 entries.

It was at the same venue 12 months ago that HHC broke their GT4 duck en route to both the Teams’ and Drivers’ titles, and the squad employed similar tactics to get the job done once again.

A demon start helped Matthiesen climb two places to second in the opening laps before hassling pole-sitter and race leader Charlie Fagg. Ben Green’s BMW made it a three-way scrap for the lead initially before an off at Deene dropped the M4 seventh.

That left the top-two and Equipe Verschuur’s rapidly advancing McLaren driven by Dan McKay nose-to-tail out front, the Ginetta closing right up and even alongside through the twisty infield before losing out to both 570Ss down the long straights. Lap after lap they circulated together before Matthiesen used the GT3 traffic to finally find a way past Fagg, who also lost out to McKay in the same move just before the pit window opened after 60 minutes.

But while both Equipe Verschuur and Tolman pitted their McLarens, HHC elected to wait another 10 minutes – just as they did 12 months ago – before calling in their #55 Ginetta. And with the extra 20s minimum pitstop time for all Silver Cup crews negated, Pointon re-joined the action still leading from Michael O’Brien, who’d taken over from Fagg.

But while the Ginetta was able to extend its lead and ultimately cruise to victory by 23s, O’Brien began slipping back into the clutches of his pursuers. Track-Club’s stop/go penalty for a short pitstop provided some relief initially, but there was no stopping Anttila who, as one half of UltraTek’s Pro/Am crew that also featured Johansen, had benefitted from the shorter minimum pitstop time. 11th before the pit window thus became fifth afterwards, before the Finn also passed Finlay Hutchison’s Verschuur McLaren, Ben Barnicoat’s penalised 570S and, ultimately, O’Brien.

Attention now switched to the final podium place, which featured a late four-way battle that eventually went Nicoll-Jones’ way. Academy’s #62 Aston Martin was running fourth before the stops in Moore’s hands but dropped to seventh when it re-joined as a result of the Silver Cup’s extra pitstop time. Nicoll-Jones wasn’t deterred, though, and carved his way back through the field late on to claim the final place on the podium.

UltraTek backed up its best-ever British GT4 result by also taking fourth overall and a Pro/Am one-two courtesy of Kelvin Fletcher and Martin Plowman, who both produced standout performances in their respective stints. Indeed, the latter made the decisive move on O’Brien on the final lap.

Elsewhere, Team HARD. with Trade Price Cars won the PMW Expo Team of the Weekend Award for repairing their heavily damaged #88 Ginetta between practice and qualifying on Saturday, as well as persevering with issues throughout the race.

Meanwhile, lap records fell in both classes courtesy of Sorensen (1m17.769s) and Matthiesen (1m23.642s), who were awarded Sunoco Fastest Driver of the Weekend trophies on the podium.

Next up it’s Snetterton where British GT returns to its 2x 60-minute race format on May 26/27.

DRIVER QUOTES
Lee Mowle, #116 ERC Motorsport Mercedes-AMG GT3: “I genuinely have no idea how we won that race! I picked up a few places when the McLaren and Optimum Aston went off, plus I think I passed Ian Loggie’s Bentley, but then I also gave a few away with a moment at Tarzan. Yelmer put a fab move on Phil [Keen], as well as a brilliant one around the outside of Darren [Turner], so there were two there plus some more from drive-through penalties! But the rest? No idea. I’ve never gone particularly well around here, and Oulton wasn’t the best circuit for the Mercedes, so to come away with two podiums in three races and the championship lead is remarkable, really!”

Patrik Matthiesen, #55 HHC Motorsport Ginetta G55 GT4: “The team made the pitstop call – they could see I had the pace to make the gap and give Callum [Pointon] the lead after the stops. And I was like ‘ok, I’ll stay out and have some hammer time!’ I made a good start and enjoyed a fun battle with the McLaren and BMW, but couldn’t get past. It was quite tough for a few laps because as much as I wanted to take the lead I still had the BMW in my mirrors. That was maybe the toughest endurance race I’ve ever done.”