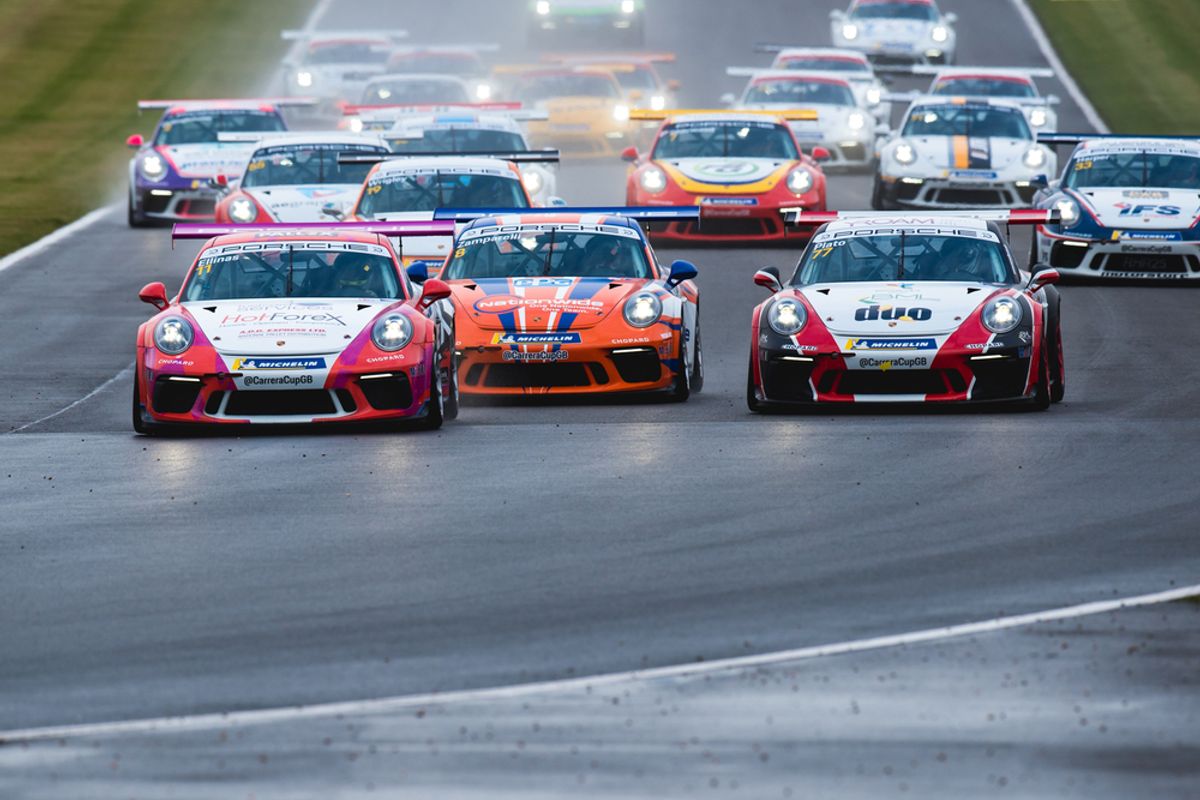 Maiden Porsche Carrera Cup GB victories for Tio Ellinas (Slidesports Engineering) and Lewis Plato (JTR) at Donington Park means that the fastest single marque GT racing championship in the UK has seen four different winners from the first four rounds. Ellinas dominated qualifying in the wet and converted that into a race one victory, his first in sports cars since switching from GP2. Plato’s long-awaited win in race two saw the Essex driver finally realise his speed and potential from the past two seasons.

Jamie Orton (JTR) emerged from the weekend still in the lead of the Pro-Am category. However, there were serious challenges from Dan Vaughan (Motorbase Performance), who took category honours in the first race, and Rory Collingbourne (Welch Motorsport). In the Am category, Peter Kyle-Henney (IN2 Racing) and Peter Mangion (Team Parker Racing) renewed their close battle from the opening rounds, the first race taken by impressive newcomer David Shaw (G-Cat Racing) and the second by Mangion.

Dino Zamparelli (Redline Racing) narrowly maintained his championship points lead, but wins at Donington from Ellinas and Plato have established a keen Pro category rivalry set to build further throughout the rest of the season. Similar closely matched championship battles in both the Pro-Am and Am categories add to the open-ended nature of the 2018 season.

Race one
Tio Ellinas (Slidesports Engineering) dominated a wet qualifying session to secure his maiden pole position in Carrera Cup GB, Dan Harper (JTR) and Dino Zamparelli (Redline Racing) started second and third respectively. A damp and cool track greeted the 23 drivers for Saturday’s race – as a result the entire grid started on grooved wet weather tyres. Of the top three it was Zamparelli who made the best get away as the lights went out, almost pulling level with the front row starters into Redgate. Plato immediately made a move to snatch the lead on the first lap, demoting Ellinas to P2, while Tom Wrigley (JTR) passed Dan Vaughan (Motorbase) and Dan Harper (JTR) to advance two positions into fourth. However, Vaughan maintained his lead of the Pro-Am category, while Peter Mangion (Team Parker Racing) kept his position at the head of the Am field.

On lap 4, Ellinas regained the lead after a move on Plato into Coppice, Zamparelli followed him through two laps later, passing Plato into Redgate for second place. In parallel, Harper performed a similar move into the same corner to overtake Wrigley for P4. In sixth and seventh positions overall were Pro-Am drivers Vaughan and Perez, with Justin Sherwood (Team Parker Racing) sitting third in category.

An incident on lap 9 saw Am runners Iain Dockerill (Asset Advantage Racing), Shamus Jennings (G-Cat Racing) and Gary Eastwood (G-Cat Racing) engaged in a battle through Redgate – Dockerill and Jennings ended up off the circuit before the pair continued, Jennings retiring to the pits. Over the coming laps Zamparelli systematically closed the gap to leader Ellinas, reducing it from over three seconds to just seventh tenths of a second, at which point the pair began trading fastest overall lap times.

On lap 16 Rookie David Shaw (G-Cat Racing) passed Mangion for the lead of the Am category, while Harper mounted a challenge on Plato for P3 overall. The Junior finally made his attack stick with a move on the inside of Plato into Redgate, clinching the final podium position in the process. Ellinas crossed the line to take his maiden Carrera Cup GB win, with Zamparelli just a few tenths of a second behind.

After Ellinas had taken the chequered flag, he made contact with an unlapped Mangion. The second-placed Am driver was still negotiating his final racing lap, entering Redgate when the pair came together. Mangion’s race ended in the gravel trap, while Ellinas was docked three championship points for the incident.

As part of the 2018 podium procedure, winner Ellinas selected at random the number five ball, which reverses the grid positions of the top five overall race finishers from round three. This formed the starting grid for round four; Plato, Wrigley, Harper, Zamparelli, Ellinas.

Race two
At the start of a dry race two, taking place over 33 laps as opposed to the 23 laps of race one, pole-sitter Plato held his front row advantage to grab an early race lead. Behind him, Plato’s JTR team mate Harper passed Wrigley in the first corner moving into second position, with Zamparelli fourth and round three winner Ellinas in fifth. Lap two saw Harper slip back, allowing Wrigley to repass him followed by Zamparelli who moved into third place. Behind, Gamble and Orton came together at Coppice, and although both lost places, they rejoined the race.

Harper, battling damage to his car, continued to fall back through the pack with Pro-Am leader Collingbourne passing him on the inside into the chicane at the end of lap five. On lap nine the Junior tangled with Perez, both cars spun yet managed to continue their races. Collingbourne and Vaughan were engaged in their own battle for top Pro-Am honours, swapping places before the pair got together at the final corner, Collingbourne ending his race in the gravel trap bringing out the Safety Car to facilitate the recovery of his car. For his part in the incident, Vaughan will have a six-place grid penalty applied for round five. For overtaking the Safety Car, Rookies Gamble and Esmee Hawkey (GT Marques) were subsequently excluded from the results.

On lap 20 the safety car peeled off the track allowing racing to resume. Rivals Kyle-Henney and Mangion diced for position at the head of the Am category, Mangion managed to squeeze by at the chicane and, though they would swap positions again towards the end of the race, Mangion ultimately prevailed. Behind them Rookie Eastwood overtook Jennings for P3 in Am. At the front of the race Plato, Wrigley, Zamparelli and Ellinas were nose-to-tail for the overall lead, their close battle neutralised only momentarily as they passed Coppice. At that section of the track yellow flags were waved for a handful of laps to enable the recovery of Fraser Robertson (Redline Racing), Robertson’s car stranded in the gravel trap.

In the final laps, Wrigley put Plato under pressure for the lead of the race while Ellinas honed in on Zamparelli for P3. The top four were covered by just 1.2 seconds in the dying moments, but ultimately the positions would remain, Plato taking his maiden Carrera Cup GB victory. In the Pro-Am category Orton took the win from Perez and Sherwood. For his achievement, Plato was awarded the Driver of the Weekend accolade, his team JTR receiving the Team of the Weekend award.