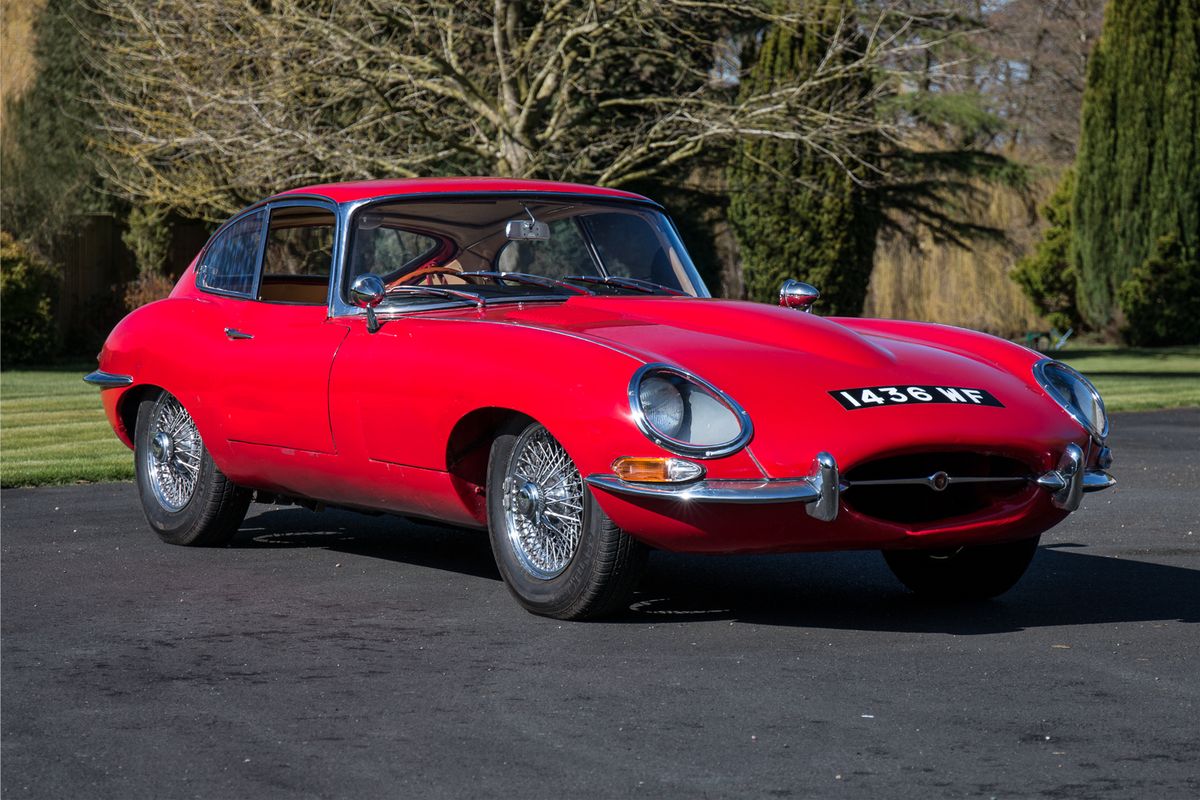 Silverstone Auctions has confirmed that a significant Jaguar E-Type 3.8 ‘Flat Floor’ coupé will be offered for auction at its May Sale on 19th May at Silverstone racing circuit.

Silverstone Auctions’ classic car specialist, Richard Greenhalgh said, “The Jaguar E-Type is a consistently popular car with the public and enthusiasts alike, with its sweeping curves and stylish design making it one of the most beautiful cars of all time. This is a unique opportunity to buy a significant numbered car, there is only one after all!”

This particular right-hand drive E-Type was first purchased on 21st December 1961 from RB Massey in Hull. The owner cherished the car but an expanding family necessitated two more seats so it was part exchanged in 1965 for a Jaguar MkII saloon. The car remained in Yorkshire until 1976 when it was purchased and moved to Glasgow. The owner’s aim was to restore the car when time and funds permitted. During this time various works were carried out including a colour change to red, but it doesn’t appear to have ever been finished. The E-Type was sold on again in 2003, during which time the owner returned it to roadworthy condition before selling it to its current owner who has owned it for the past 15 years.

Chassis #860100 is fitted with its original 3.8 litre 6 cylinder engine that was sent to VSE Engineering for a full rebuild in 2004, and has only covered 1,200 miles since. At the same time as the engine removal the E-Type was treated to a full brake rebuild and rear axle removal. The Jaguar was given a full re-trim in Tan leather and repaint in Carmen Red later on in its current ownership, along with a new fuel tank and a full stainless steel exhaust system.

Today the beautifully presented E-Type has been used only occasionally for classic car runs and shows. The bodywork is described as solid with no obvious signs of deterioration.

“In early 1962 this would have been the most shockingly beautiful car the people of Hull had ever seen, and today she’s a true survivor. Whether the new owner wishes to return her to those heady days or just keep her well maintained and treated to an occasional day out, it would be good to play a part in the next stage of that journey,” concludes Richard.

The Jaguar E-Type is supplied with its Heritage Certificate, drivers’ handbook and receipts for work totalling over £14,000. Also included is the VSE engine rebuild data sheet as well as MoT certificates dating back to 1990, along with a current MoT issued on 15/04/18 with no advisories.

1961 Jaguar E-type 'flat floor' chassis number '860100' believed to be the 100th RHD Jaguar E-type Coupe produced.
Original engine still fitted, R.3145/9-rebuilt in 2004. Original Moss gearbox and original East Yorkshire reg number
Delivered in Opalescent Silver Blue now Carmen Red. Not Concours but an attractive 'daily driver' and guided accordingly
Owned since 2003 by our vendor. Lots of work during that period. Now lightly (but regularly) used
Drivers Handbook, Heritage certificate, Receipts for work done (£14,000). VSE engine rebuild datasheet
MOT valid until 15th, April 2019. Very seldom do we see such an early E-Type. Part of Jaguar's history
Most of us imagine that the trend amongst the world's top manufacturers of exotic automobiles to release an air-brushed artist's impression of their new ultra-desirable, hugely powerful, impossibly good-looking, we're only making a few, don't ask how much and anyway they are all sold, model is a fairly recent phenomenon, however, it's not. Way back in 1961, Jaguar Cars did just that with their forthcoming E-Type and the only difference was that the forecast list price for the new model was about half of what you thought it might be. Sir William Lyon's savvy move of restricting the sale of the first 50 or so cars to established racing drivers or celebrities only fuelled demand still further and magazine articles have been written about just how far potential customers would go to be moved up the rapidly expanding waiting list.

One such customer who was quick off the mark in 1961 was Gerald Barton, owner of the Humber Oil Company (later Humbrol Paints). He was a long-term Jaguar enthusiast and placed his order for an E-Type at the first possible opportunity, appreciating that he may have to wait some time. His patience was rewarded when, late in December, he took delivery of an Opalescent Silver Blue Fixed Head Coupe, registered 1436 WF and bearing the Engine Number R3145-9 and the Chassis number 860100. According to Jaguar records, chassis numbers for right-hand drive, fixed head coupes began at 860001 and ended in 1964 at 861799 so it would make sense to assume 1436 WF was, in fact, the 100th Coupe off the line. The Jaguar Heritage Certificate confirms that it was manufactured on December the 12th, 1961 and dispatched to dealers, RB Massey in Hull, on December the 21st. Gerald loved his E-Type but an expanding family necessitated two more seats so, in 1965, it was part exchanged for a new Jaguar Mk.II saloon.

The records office in Beverley confirms that 1436 WF remained in East Yorkshire until 1976 when it was purchased by Ronald Kayser from Glasgow and moved north of the border. He was to own the car up until 2002 and planned to restore it “as and when funds permitted”, however, although various works were carried out including painting it Red, it doesn't appear to have ever been finished.

Its next owner was Nigel who writes “I purchased this car in 2003 in non-running condition. It had remained registered to Ronald Kayser until 2002. The car was in good structural condition but had very poor paintwork (a mixture of dull Carmen Red with primer in places) and the interior had been badly refinished with cream vinyl coat or similar. The original 'flat floor', engine and Moss box were all in place, together with the original registration (1436 WF). I got the car running and roadworthy (UK MoT'd), before selling it on.”

It was at this point that our vendor's 15-year ownership commenced. He writes “I bought the car in 2003 and used it for a couple of years. I then took it to Hutson Motor Company in Bradford for some remedial work including rear axle removal, rebuilt brakes etc. Whilst this work was being done (2004) the engine was removed and sent to VSE Engineering in Llandrindod Wells for a full rebuild. This was then returned to Hutsons and refitted to the car.” Further into his ownership the Jaguar has been retrimmed and repainted in Carmen Red and benefitted from a new fuel tank and a full stainless steel exhaust.

The car is only used occasionally for classic car runs and shows and has covered just over 1,200miles since most of that work was completed. The bodywork is described as solid with no obvious rot issues, the paintwork is 'micro-blistered' in places and has the odd scuff here and there, the engine has only covered 1,200 miles, the gearbox and transmission are good and the electrics appear in good order. All in all, this is a very usable 'flat-floor', not Concours, but still smart and much admired.

It is accompanied by its Heritage Certificate, Drivers Handbook, receipts for work carried out totalling over £14,000, the VSE engine rebuild data sheet, and MoT certificates from 1990 to date. It was issued with a fresh 12-month MOT on 15/04/18 with 'No advisories'.

In early 1962, this would have been the most shockingly beautiful car the people of Hull had ever seen, but, since then, this venerable old girl has been on quite a long journey and, whether the new owner wishes to return her to those heady days or just keep her well maintained and treated to an occasional day out, it would be good to play a part in the next stage of that journey.