Stars and cars turn out for Silverstone Classic preview 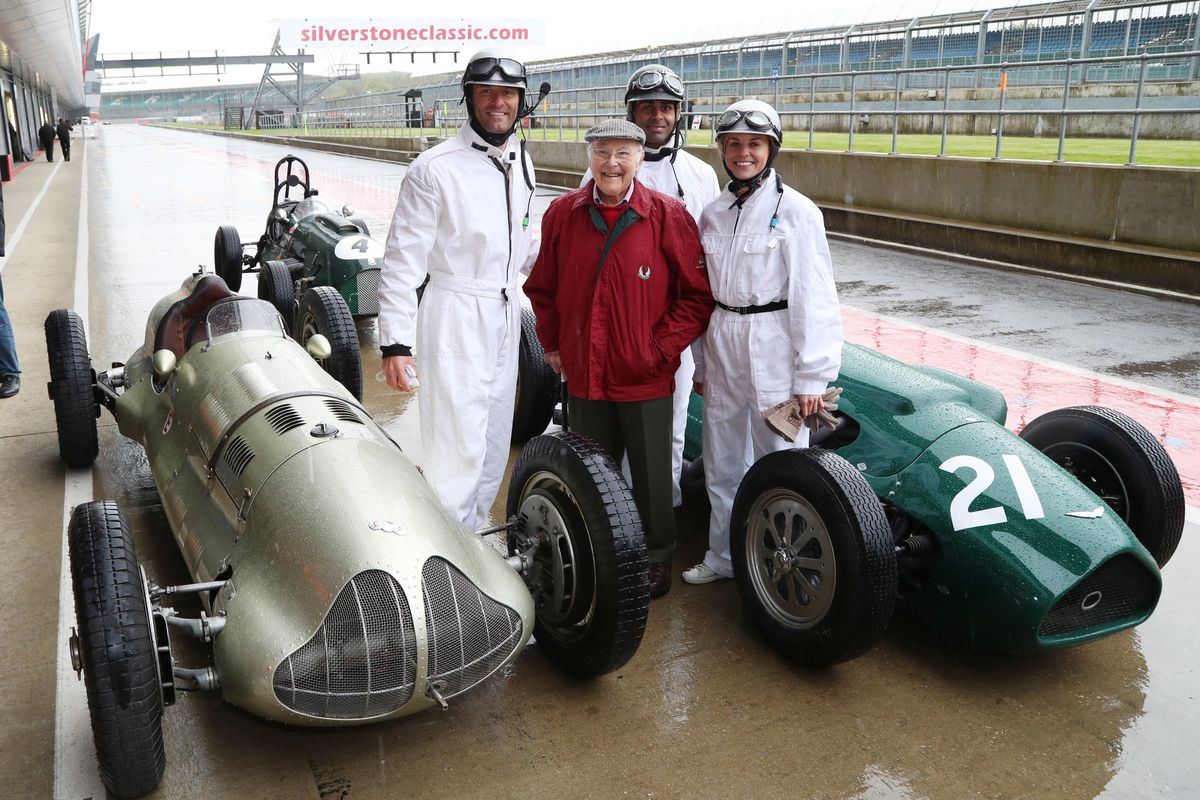 Formula 1 stars, Le Mans winners, touring car champions, motor sport legends and one of Britain’s most decorated Olympians were among the fast and famous revving up yesterday (Wednesday) for this summer’s eagerly-anticipated Silverstone Classic.

Held in and around Silverstone’s iconic Wing complex and on the hallowed Grand Prix track, the star-studded Preview acted as the perfect curtain-raiser to the world’s biggest classic motor racing festival, which will be staged at the ‘Home of British Motor Racing’ from 20-22 July.

Webber, Chandhok and Wolff joined Walker to film a special feature for Channel 4 F1 to mark 70 years since Silverstone hosted its very first Grand Prix – a race Walker attended as a spectator, before returning to take to the mic the following season – with one of the standout features of the forthcoming Classic set to be a special parade to celebrate that landmark anniversary.

Webber got into the spirit of the occasion by climbing behind the wheel of an ERA GP1 E-Type as raced in that first Grand Prix in 1948. Not to be outdone, Chandhok and Wolff took to the track in Alta and Cooper Bristol Grand Prix cars respectively from the same era.

“It’s been a very exciting day here at Silverstone,” enthused the Australian, who went on to compete in – and win – the FIA World Endurance Championship after hanging up his F1 helmet at the end of 2013. “Unfortunately, I’m away for the Classic weekend itself but I know it’s an incredible event – with more than 1,000 entries, it’s one of the biggest in the world. It’s an historic venue that attracts an incredible collection of cars and I think it’s hit Susie, Karun and myself straight between the eyes today just how much passion and enthusiasm is here.”

Also filming were Sky Sports F1, with Brundle track testing a Ferrari 246 Dino in honour of Britain’s first world champion Mike Hawthorn, who raced a similar car to the F1 title 60 years ago in 1958. The try-out represented the 50th Formula 1 car that the versatile Englishman has driven. Both the Sky and C4 features will air later in the season as part of their F1 coverage, highlighting the spotlight that the Classic shines on retro F1.

Another momentous milestone in 2018 is 60 years of the ever-popular British Touring Car Championship (BTCC), and in evidence of the series’ enduring appeal, former champions Jason Plato, Rickard Rydell and John Fitzpatrick were joined at Silverstone today by reigning title-holder Ashley Sutton for a veritable tour de force. The four men count more than 125 race wins between them, and the Swede wound back the clock as he returned to the cockpit of the striking Volvo S40 in which he clinched the coveted crown 20 years ago.

Two-time title-winner Plato brought the action right back to the present day by joining the tracking laps in his current Subaru Levorg GT, while Fitzpatrick is the series’ oldest surviving champion and, like Rydell, will return to Silverstone for the main event itself as part of an even larger contingent of tin-top greats this summer. Other cars on display today included the headline-grabbing Volvo 850 Estate from 1994, Frank Gardner’s 1968 title-winning Alan Mann-prepared Ford Escort and the Austin A40 with which George ‘Doc’ Shepherd lifted the laurels back in 1960. All of these and more will form part of a 60-car Diamond Anniversary parade on Tin Top Sunday in July.

Amongst the 120-plus cars testing were many more representative of this year’s special highlights. Formula Junior celebrates its Diamond Jubilee in 2018 – with in excess of 100 of these original F1 starter formula cars already entered for the Classic – while this summer’s spectacular will, for the first time, welcome the exciting new Masters Endurance Legends series, whose grid numbers will include multiple gold medal-winning cyclist Sir Chris Hoy. That race will form part of a special ‘Daytona at Dusk’ tribute to the Daytona 24 Hours, with three unmissable GT and sportscar showdowns lining-up together as the sun sets on Saturday evening.

In addition to the racing, car clubs will be out in force at the Classic this summer celebrating myriad model and marque anniversaries. Those present for the Preview Day included examples of the front-engined Ferrari Daytona – 50 years young and still as iconic as back in its heyday – and Aston Martin’s DB1 and DB4, which wowed in the paddock and out on the legendary GP circuit in equal measure.

“I think it’s safe to say that everybody that attended today’s Silverstone Classic Preview has had their appetite well and truly whetted by the sensational showcase of cars on display and out on-track,” said Event Director, Nick Wigley. “We’ve had famous faces in abundance, from Formula 1 superstars to some of the finest touring car drivers ever to grace the grid and the man whose voice is unquestionably the most instantly recognisable anywhere in the sport – the inimitable Murray Walker.

“With so much to celebrate, the 2018 Classic is going to be even bigger and better than ever before, and with pre-event ticket sales currently running at record levels, it is clear that this summer’s programme of races, activities and attractions has captured the attention of fans far and wide. There really will be something for everyone when we return here in July – a visual and audible feast for all the senses.”

All media assets (images, footage, audio etc.) from today’s Preview are available to press for free editorial use via the event website at: https://www.silverstoneclassic.com/media-info

Whether two- or four-wheel fanatics – or indeed families looking for a memorable fun-fuelled day out – all visitors wishing to attend this summer’s Silverstone Classic must book in advance. As has proved so popular in the past, every admission ticket provides free access to both Silverstone racing paddocks, all open trackside grandstands, live music concerts on Friday and Saturday evenings (topped by Soul II Soul and UB40 respectively), air shows, Drive Live test drives, funfair rides and the vast majority of the epic family entertainment on offer. Options for camping and hospitality are also available. Full details of all 2018 ticket prices are detailed on the silverstoneclassic.com website.