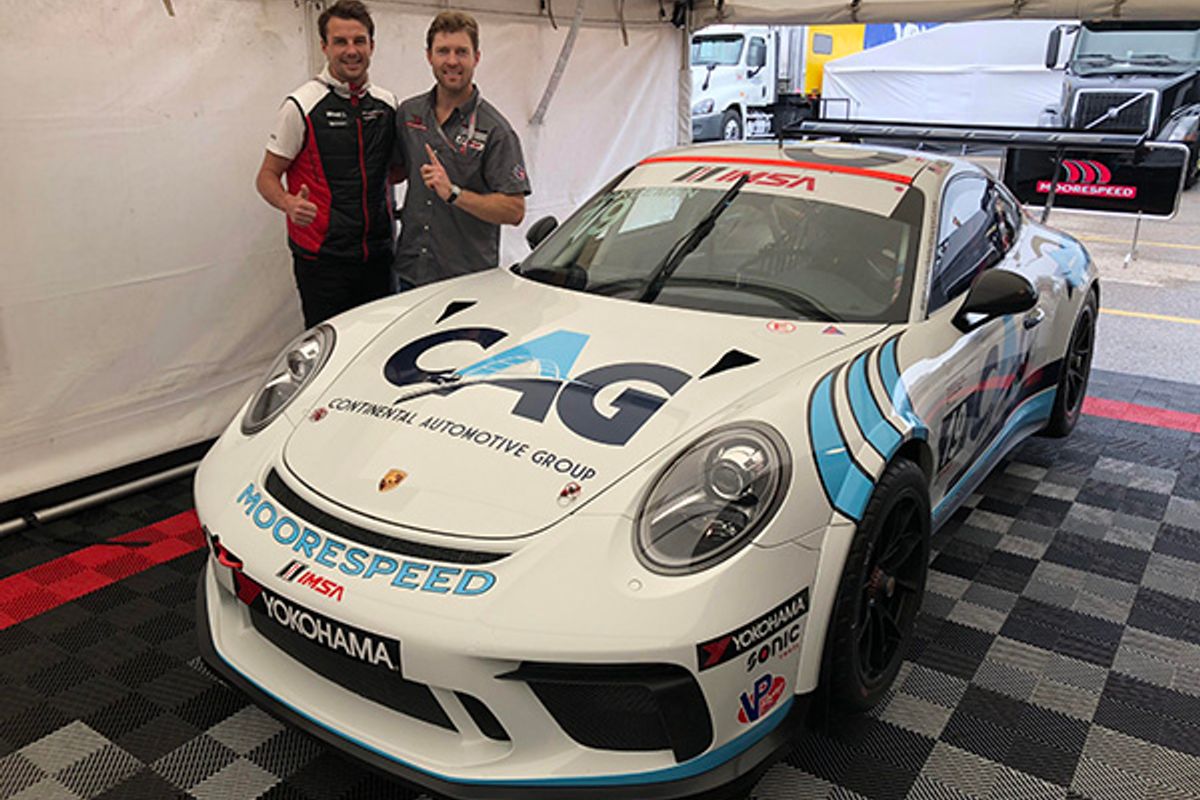 Hardeman and No. 19 CAG/Moorespeed Porsche GT3 Cup Team Ready to Build on Consistent and Competitive Season in Saturday/Sunday Mid-Ohio Doubleheader

Moorespeed returns to a Mid-Ohio Sports Car Course circuit on which they have seen some success this weekend for Rounds 5 and 6 of the IMSA Porsche GT3 Cup Challenge USA by Yokohama that will see team driver Will Hardeman make his race debut in the No. 19 CAG/Moorespeed Porsche GT3 Cup on the 2.258-mile Buckeye road course.

Moorespeed and Hardeman will continue their collective mission of consistent and competitive race weekends at Mid-Ohio as the fourth-year team and driver combination has all eyes focused on the 2018 IMSA Porsche GT3 Platinum Cup Championship.

“Mid-Ohio is one of the classic tracks, a driver’s track, and has been historically good to us,” said Moorespeed President David Moore. “Our last time there was a while back, but I remember it well as we won the top GT class in World Challenge in a 3.8-liter Porsche RSR. It’s a very technical track, like me and, frankly, our entire team, Will is very technical and he seems to have taken to Mid-Ohio like a ‘Duck in Water.’”

Hardeman makes his Mid-Ohio race debut this weekend but he and Moorespeed tested on the track last month. Hardeman and Moore have also spent countless hours learning Mid-Ohio on the team simulator back home in Austin, Texas.

“One would say Mid-Ohio is a driver’s track with tons of curvy, linked sections that demand attention and respect as there are consequences for going off track at speed,” Hardeman said. “I think it will be challenging to get the most out of a lap, but when we do it will be very rewarding.”

Hardeman and Moorespeed earned fourth and third place finishes, respectively, in the Saturday and Sunday rounds of the most recent IMSA Porsche GT3 Cup race weekend at Barber Motorsports Park two weeks ago.

“We just have to keep our focus and be smart," Moore said. "How the weather plays a role, as well as running on track with our big brothers and how the WeatherTech series rubber affects our setup versus the IndyCars, could be a big factor in what the weekend looks like.”

“I feel we have a good handle on just about any condition thrown at us as we have pretty much done it all this year,” Moore said. “And we have done it well, even testing on a snowy day here at Mid-Ohio the week before Barber.”

Moorespeed teamate and driver coach Earl Bamber, the Porsche Factory driver who is a two-time 24 Hours of Le Mans winner, was part of the snowy test session. Bamber makes his Mid-Ohio debut this weekend too, co-driving a GTLM-class Porsche 911 RSR in the IMSA WeatherTech SportsCar Series main event.

Last month’s “snow-day” test included some spirited ride-alongs with Hardeman in a rental car Bamber capably put through its paces on the slick Mid-Ohio circuit.

“I’d say our driver coach, Earl Bamber, may be one of the most technically detailed drivers I’ve been around in ages, so it suits us well, and the entire Mid-Ohio track suits Will,” Moore said. “He seems to relish and perform better at the technically-challenging tracks.”

Hardeman does indeed find the 13-turn Mid-Ohio circuit to his liking.

“I think Mid-Ohio is a track that pairs well with my driving style,” Hardeman said. “Although I acknowledge the challenge it is, I typically fare better than the competition at ‘driver’s tracks’ like Mid-Ohio.”

After the Barber podium and a victory at Sebring in March in the span of the year’s first four races, Moorespeed and Hardeman come to Mid-Ohio well positioned in the 2018 championship point standings.

“As part of the ‘Eyes Forward’ approach, I can’t relax my preparation for anything we do looking ahead,” Hardeman said. “I am thrilled about our season standing, and it only strengthens my resolve to keep the wick turned up.”

The weekend’s first 45-minute race is later on Saturday at 5 p.m. while the second and final IMSA Porsche GT3 Cup race is scheduled to go green Sunday at 9:15 a.m. EDT. Both races can be seen live at IMSA.com.