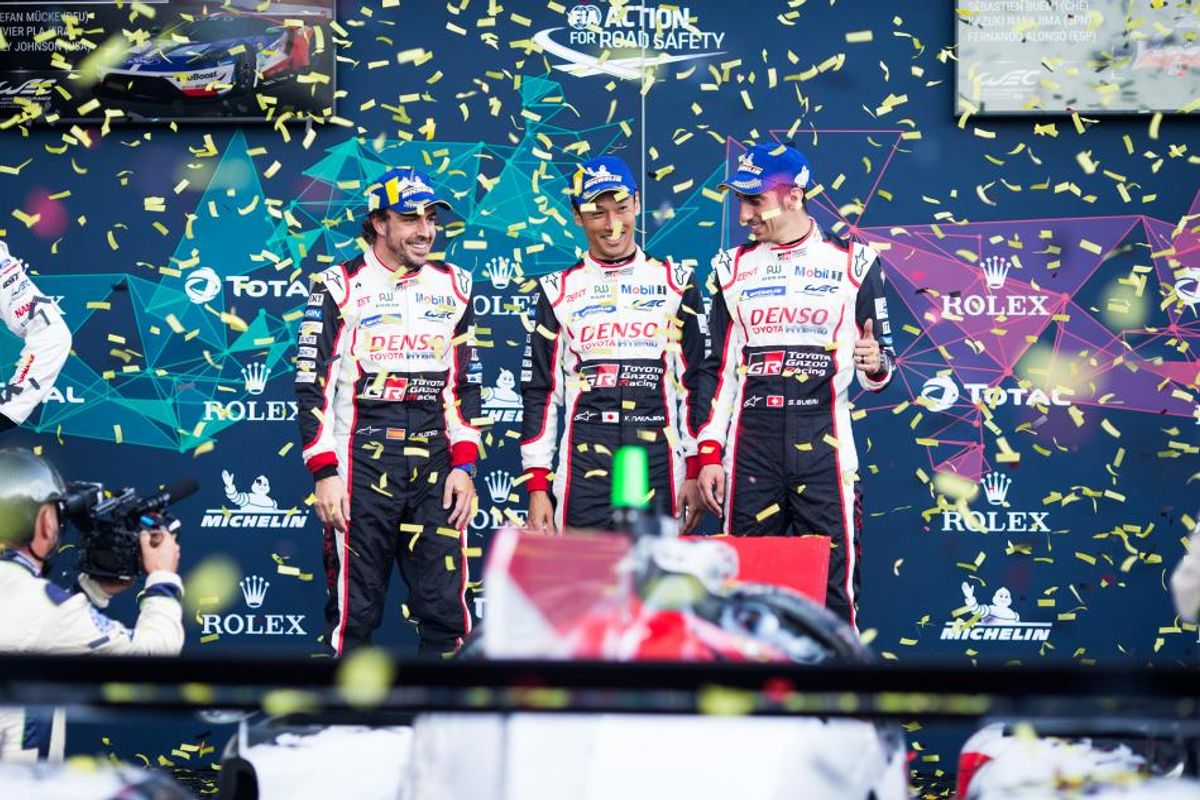 The no8 Toyota Gazoo Racing trio of Fernando Alonso, Kazuki Nakajima and Sebastien Buemi got their 2018/19 Super Season title challenge off to a perfect start with a lights to flag victory to claim maximum points at the Total 6 Hours of Spa-Francorchamps.  Alonso brought the TS050-hybrid home just 1.4 seconds ahead of the no7 Toyota driven by Mike Conway after a last hour safety car eroded the Spanish driver’s large lead.

Mike Conway, Jose-Maria Lopez and Kamui Kobayashi had to fight their way up from the rear of field after starting the race from the pitlane one lap behind.  Rebellion Racing was the best of the non hybrid LMP1 competitors, with Andre Lotterer taking the final podium position in the no1 R13-Gibson, two laps behind the Toyotas and 41 seconds ahead of Thomas Laurent in the no3 R13.

However in post race scrutineering the no1 Rebellion was disqualified after the skid block under the car was 1.2mm under the tolerance (stewards decision no44).  The no3 Rebellion R13 was promoted into third place.

Ford capitilised on their overall pace to take victory in Belgium with the no66 Ford GT of Olivier Pla, Stefan Mucke and Billy Johnson finishing ahead of the no92 Porsche of Michael Christensen and Kevin Estre.   Davide Rigon snatched third place in the no71 AF Corse Ferrari in final moments with firm move at Bus Stop chicane on Richard Lietz in the no91 Porsche.

G-Drive Racing takes second consecutive LMP2 win at Spa as Jean-Eric Vergne, Andrea Pizzitola and Roman Rusinov take comfortable victory, Vergne crossing the finish line 21 seconds ahead of Ho Pin Tung in the no38 Jackie Chan DC Racing finish and 55 seconds in front of the no36 Signatech Alpine A470 of Andre Negrao.

The LMGTE Am class saw the closest finish as Pedro Lamy in no98 Aston Martin Racing Vantage held off at very determined challenge by Euan Alers-Hankey in no90 TF Sport Vantage.  The Portuguese driver held on to take the chequered flag just 0.221s ahead. The no61 Clearwater Racing Ferrari of Weng Sun Mok, Keita Sawa and Matt Griffin was third but one lap behind the two Astons.

First Race of Super Season Starts in the Sunshine

The Total 6 Hours of Spa-Francorchamps got underway in bright sunshine and soaring temperatures.    Sebastien Buemi in the no8 Toyota opens up advantage over the two Rebellion Racing R13s.

The race started dramatically after first lap incident involving the no86 Gulf Porsche brings out Safety Car for several laps and then the no4 ByKolles Racing Team Enso-Nismo survives brief engine fire in pits to continue at the front of the LMP1 field.

Mike Conway cuts through pack after starting from pit lane at end of first lap and was up to sixth place overall at the end of the opening hour, thanks in part to the early Safety Car.

The no66 Ford GT of Stefan Mucke at grabbed lead at La Source on opening lap after teammate Harry Tincknell runs wide while the two Porsche 911s take the challenge to Ford.  Tincknell’s race came to an end at Raidillon when the Ford GT speared into the barriers.  The British driver emerged unharmed as the second safety car of the race was deployed, bunching the field again.

2016 ELMS Champion Giedo van der Garde in the Racing Team Nederland Dallara carveg his way through the LMP2 field to take lead from the no36 Signatech Alpine early in the race.  However an  alternator problem dropped the flying Dutchman from the lead of the class.  The no37 Jackie Chan DC Racing car inherited the lead but was passed by Jean-Eric Vergne in G-Drive Racing Oreca.

LMGTE Am saw the no90 TF Sport Aston Martin grab the lead as Charlie Eastwood pushes to the front overtaking the no98 Aston Martin of Paul Dalla Lana.  Dalla Lana was then pushed down to third by the no77 Dempsey Proton Porsche driven by youngest driver on grid Julien Andlauer.  Aston Martin Racing re-asserted it’s authority after the next set of pitstops as Pedro Lamy opened up the lead to one minute over Salih Yoluc in the no90 TF and Eddie Cheever III in the MR Racing Ferrari 488.

As the final hour approached the Safety Car was deployed for a third time after the no 17 SMP Racing BR1 crashed heavily at Raidillon, with Matevos Isaakyan emerging from the car.    The no 51 AF Corse Ferrari 488 GTE Evo of Alessandro Pier Guidi suffered damage and lost fourth position after pit-lane contact with Team Project 1 Porsche after the Italian was released into the path of the Porsche as it headed to its pitbox.

The final part of the race saw thrilling battles for the lead of the LMGTE Am category between the two Aston Martins of Pedro Lamy (no98 AMR) and Euan Hankey (no90 TF Sport) and for third place between the no71 AF Corse Ferrari of Davide Rigon and the no91 Porsche 911 of Richard Lietz.

The no8 Toyota Gazoo Racing Toyota TS050-hybrid with Fernando Alonso at the wheel, took the chequered flag to score the first win for the Spanish double world champion in the FIA World Endurance Championship.