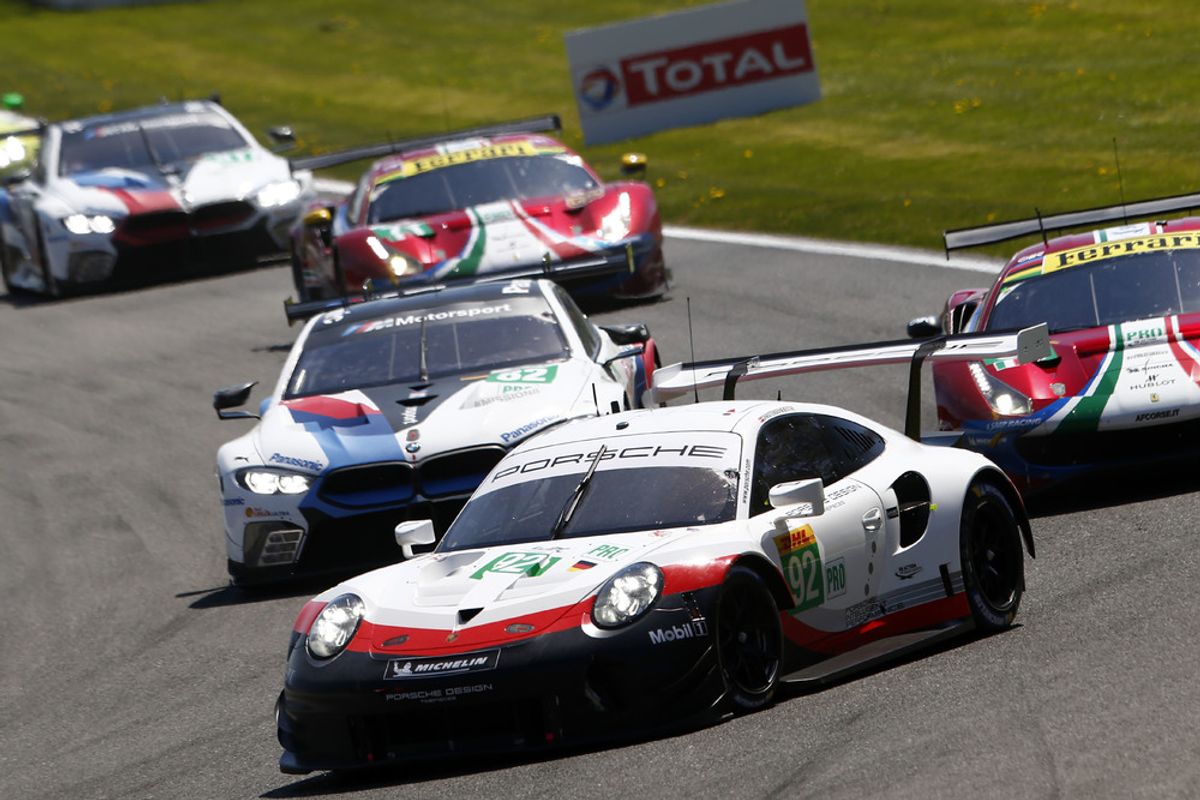 After a gripping race at Spa-Francorchamps, the Porsche GT Team has started into the FIA Sports Car World Endurance Championship (WEC) season with second and fourth place. Frenchman Kévin Estre and Michael Christensen from Denmark scored second in the #92 car and narrowly missed out on clinching the maiden WEC victory for the new Porsche 911 RSR. Their team colleagues, the two former WEC champions Gianmaria Bruni (Italy) and Richard Lietz (Austria), concluded the race in fourth with the #91 Porsche 911 RSR. Over six hours and 148 laps, ten vehicles from five manufacturers battled it out in the GTE-Pro class. Under a cloudless sky and temperatures of 23 degrees Celsius, 63,000 spectators witnessed round one of the 15-month 2018/2019 Super Season.

At the season-opener on the tradition-steeped racetrack in the Ardennes, fans were treated to gripping battles for positions, overtaking manoeuvres and several safety car phases. Taking up the race from third on the grid, Bruni and Lietz moved into the lead of the GTE-Pro class with the Porsche 911 RSR after less than two hours, and only relinquished it shortly before the flag. In the sister car, Estre and Christensen made the most of the turbulent start to advance from fourth into third. After the last pit stop, Christensen as the final driver swept into second place with the Porsche 911 RSR.

Round two of the FIA Sports Car World Endurance Championship (WEC) will be contested on 16/17 June at Le Mans/France. Prior to the legendary 24-hour classic, a test day will be held on the 13.6-kilometre racetrack on 3 June.

Comments on the race
Pascal Zurlinden (Director GT Factory Motorsport): “That was a very difficult race for us. The performance of the cars and the team was very good. In fact, everything looked good for us to win the race. But unfortunately Lady Luck wasn’t with us towards the end of the race, because the last safety car phase didn’t fit in with our strategy. Now we’re heading to Le Mans where we’ll go all-out.”

Richard Lietz (Porsche 911 RSR #91): “As expected, that was a very tough fight. We held the lead for a long time, but the safety car phase eroded the gap we’d built up. Towards the end of the race I drove a double stint and could barely fend off the attacks from my pursuers.”

Gianmaria Bruni (Porsche 911 RSR #91): “I’m disappointed, of course. We were running in the lead for more than four hours. Richard and I did everything we could and we’d built up an advantage of around 15 seconds to the car behind us and about 55 seconds to third place. Unfortunately, the safety car phase cost us this lead.”

Kévin Estre (Porsche 911 RSR #92): “Our start went really well. Unfortunately the tyres began to deteriorate badly at the end of the first stint. In the middle of the race we had to drive a double stint. Michael did a great job and lost hardly any time. After that came a stop-go penalty for wheel spin in the pit lane, but we fought our way back up to position three. Sadly it wasn’t enough to win. For Porsche, it’s a very good result to start the season.”

Michael Christensen (Porsche 911 RSR #92): “This race had truly everything that a six-hour race can throw at you. Our start was okay and we managed to maintain our position over the distance. But then unfortunately we received a stop-and-go penalty. This was followed by a safety car phase and a lot of traffic. Consequently, it was a very difficult race. I’m thrilled with the podium result.”

Matt Campbell (Porsche 911 RSR #77): “Everything actually ran very well for the first race and we were amongst the leaders. Unfortunately a fuel pump problem forced us to make an extra pit stop, which of course cost us precious time. We’re heading to Le Mans feeling optimistic and we’re looking forward to our next task.”

Julien Andlauer (Porsche 911 RSR #77): “This was my first WEC race and I enjoyed it very much. The Porsche 911 RSR ran really well and it felt great to drive. Unfortunately we couldn’t fix our technical problem fast enough during the race. Otherwise it might have been good enough for a podium spot.”