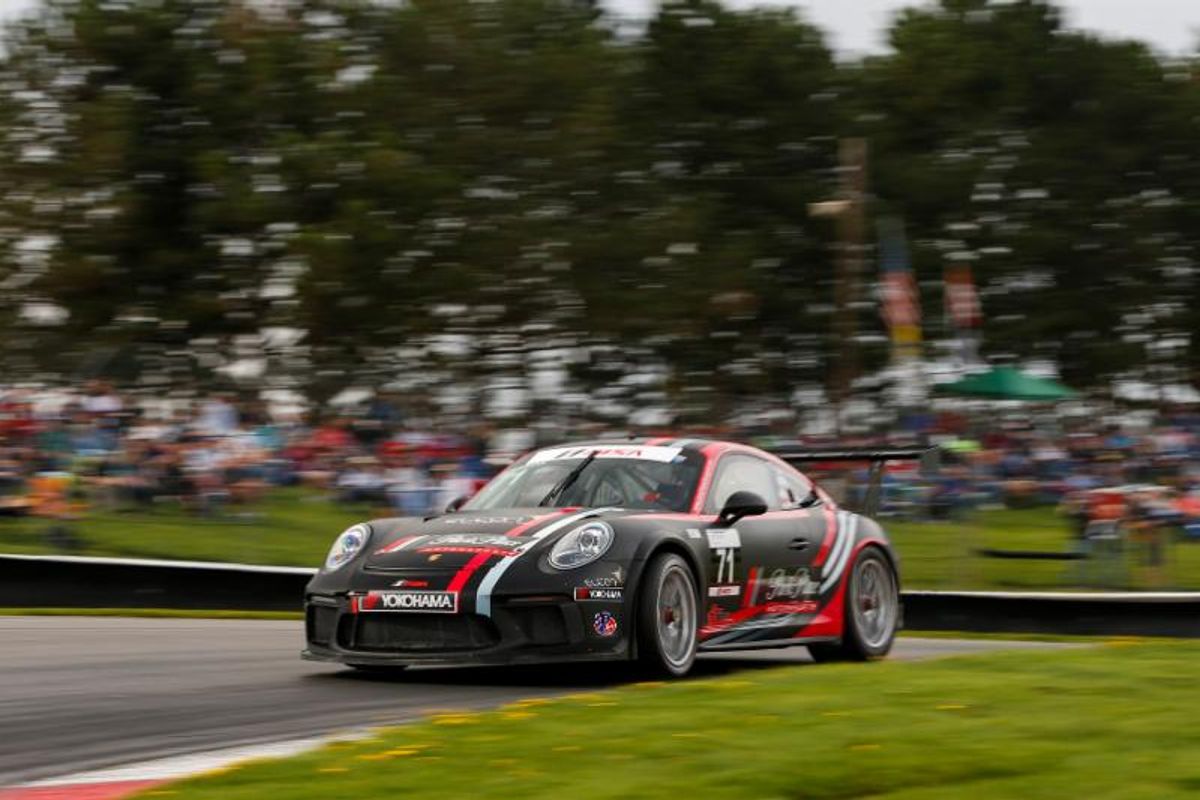 in Flag-to-Flag Run at Mid-Ohio

Driving the No. 71 Park Place Motorsports Porsche 911 GT3 Cup machine, the 21-year-old racer took the lead from polesitter Trenton Estep going through the famed Mid-Ohio Esses on the opening lap.

He spent the rest of the race with Estep in his mirrors, and Estep got particularly close on a midrace restart following a full-course caution to retrieve Anthony Imperato’s No. 91 Porsche from the Turn 2 gravel. But Kolkmann managed to keep the young Texan at bay throughout the 45-minute race to win by 1.018 seconds.

“I managed to overtake him in the first two corners and then stayed in front the whole race,” said Kolkmann, who won Race #2 two weeks ago at Barber Motorsports Park and now has finished first or second in four consecutive races. “It was close racing until three-quarters of the race, and then at the end I was pretty strong. The car was good and I was able to pull a little bit away, but it was good racing.”

Canadian De Angelis returned to the GT3 Cup Challenge USA podium for the fourth time in six races this season in the No. 1 Kelly-Moss Road and Race Porsche. To do it, he had to fight his way past Race #1 polesitter Imperato in the No. 91 Wright Motorsports entry early in Sunday’s race.

Will Hardeman, whose bid for a top-five run in Race #1 came to an end via a spin into the gravel in Turn 2, came back strong on Sunday morning to finish fourth in the No. 19 Moorespeed Porsche. IMSA Hurley Haywood Scholarship 2018 recipient Maxwell Root earned his second fifth-place result in as many races aboard the No. 5 Wright Motorsports entry.

In Platinum Cup Masters, Michael Levitas scored his second victory of the season in the No. 36 TPC Racing Porsche. Levitas also won the season-opening round at Sebring International Raceway in March.

“I tell you, TPC Racing just gave me a fantastic car,” Levitas said. “The competitors that I’m racing against just made me elevate it. When they started turning high-25s, I had to answer back with some low-25s and just keep up the pace. They were relentless, I never gave up and I just stayed in the game and that caution just made it all the more fun.

“We bunched up and we were tight the whole time. It was great. Thanks to all my competitors, thanks to IMSA, and thanks to TPC Racing. Also, my teammate, Rob Ferriol, came in P3 in Gold. Awesome job for TPC.”

Charlie Luck finished second in Platinum Masters for the second straight day to preserve his lead in the championship standings in the No. 45 Wright Motorsports machine. Columbus, Ohio’s Mark Kvamme also took his second third-place trophy in as many days at his home track driving the No. 43 JDX Racing Porsche. Luck leads Kvamme by 18 points, 191-173, in the Platinum Cup standings.

Victor Gomez IV kept the train rolling in Gold Cup for Porsche 911s built between 2014 and 2016, claiming his fifth class victory in six tries at the wheel of the No. 25 NGT Motorsport Porsche. He led throughout and beat Kurt Fazekas to the stripe by 17.257 seconds.

“NGT gave me a super car, a super-good setup,” said Gomez, who has a comfortable, 19-point lead in the Gold Cup point standings over Fazekas. ‘We were working with Nick Tandy, a Porsche factory driver, in the practice sessions, so that helped me a lot. When we were on track, I had really good pace. I think we were one-point-something out of the leaders and that’s my goal, to be as close as possible to win and keep on accumulating the wins so we can get some good points for the championship.”

Fazekas came home second in Gold Cup driving the No. 52 Kelly-Moss Road and Race Porsche and also earned the Race #2 Yokohama Hard Charger Award for most positions gained from start to finish in the Gold Cup class. His prize was a set of Yokohama ADVAN racing slicks and a custom-made skateboard.

Next up for the 2018 Porsche GT3 Cup Challenge USA by Yokohama is a pair of races at the historic, 3.4-mile Watkins Glen International circuit on the weekend of June 28-July 1. The race is part of the Sahlen’s Six Hours of The Glen weekend for the IMSA WeatherTech SportsCar Championship.