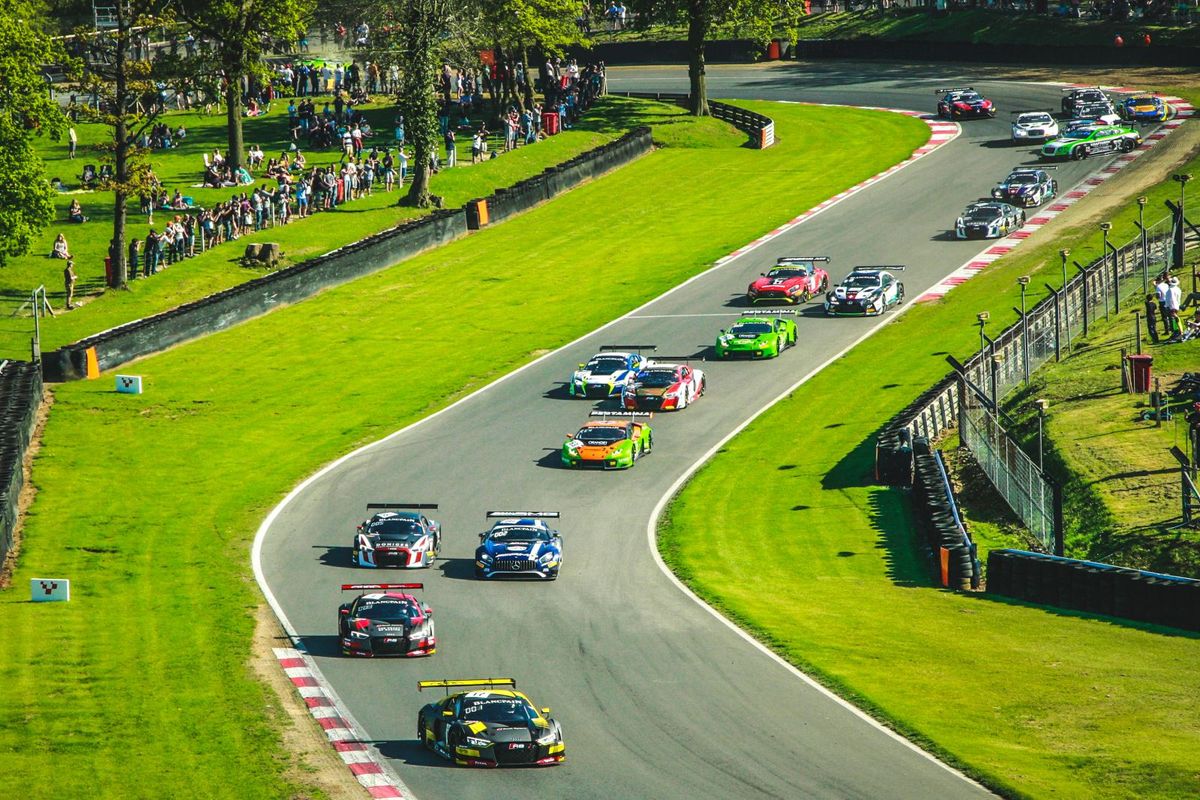 Belgian Audi Club Team WRT proved too hot to handle at Brands Hatch, securing both race victories at the second Blancpain GT Series Sprint Cup round of the season.

On a weekend of glorious sunshine at the Kent venue, the Baudour-based squad completed a clean sweep that began with two pole positions on Saturday and ended with a brace of wins on Sunday afternoon.

The victories were shared between the #2 Audi R8 LMS and the #17 machine, with the #1 car taking runner-up in both outings. There was close racing to be enjoyed throughout Sunday’s proceedings, but one thing remained constant: the WRT squad were in control at the front.

RACE 1: Vanthoor and Stevens combine to put WRT on top

The opening contest saw the #2 WRT-Audi emerge victorious, despite coming under intense pressure from the sister #1 machine throughout the second half of the race.

Dries Vanthoor was comfortable at the head of the field during the first stint, leading from pole and gradually edging away from the #66 Attempto Racing Audi of Steijn Schothorst.

But, after Vanthoor had handed over to Will Stevens, the #2 Audi experienced a prolonged attack from behind. Kelvin van der Linde had assumed the controls of the #66 machine and put up a spirited battle for top spot, only to find Stevens impossible to pass.

It was an impressive display of defensive driving from the British ace, who resisted for half an hour of fierce racing to seal victory on home turf.

The lead battle eventually grew to include Christopher Mies, who had taken over the #1 WRT-Audi from Alex Riberas, and the #88 AKKA ASP Team Mercedes-AMG of Raffaele Marciello and Michael Meadows.

There was late drama, with Van der Linde picking up a puncture and beginning to struggle during the closing minutes. Sensing an opportunity, Mies soon spotted a gap and went past the South African driver into turn 1, with Marciello also muscling his way through.

Mies therefore followed Stevens home for a WRT one-two, with Marciello preventing an Audi sweep in third. Van der Linde tumbled down the order to P8 on the closing lap, with the puncture leaving the Attempto racer struggling to even make the chequered flag.

Fourth went to the #17 Belgian Audi Club Team WRT machine of Stuart Leonard and Frederic Vervisch, with the #87 AKKA-Mercedes of Nico Jamin and Felix Serralles completing the top-five

Silver Cup honours looked destined to go to the #90 AKKA-Mercedes following a sterling opening stint from Nico Bastian. He handed over to Jack Manchester, who continued the good work by running competitively.

But an error from the local driver ended with the Mercedes-AMG machine in the gravel, allowing the #37 3Y Technology BMW M6 GT3 to grab victory on the road. However the car was later disqualified for ignoring a black and orange flag, handing Team Parker Racing a class win on home turf with their Bentley Continental GT3.

In Pro-Am, the #39 TP 12-Kessel Racing Ferrari 488 GT3 took its third win in as many Sprint Cup races thanks to Piti Bhirombhakdi and Carlo van Dam. The Ferrari was comfortable in the hands of both drivers, with Bhirombhakdi taking the start before handing over to his Dutch teammate in the lead.

The second race followed a similar pattern to the first, with Belgian Audi Club Team WRT once again securing a one-two finish.

This time it was the #17 machine that stole the show, with Frederic Vervisch leading away from pole and maintaining a small lead over the #2 car, which was driven by Mies during the first stint.

Behind them the #66 Attempto entry produced a great start to leap from fifth to third, with Van der Linde eager to make up for the earlier lost podium.

It remained that way throughout the first stint, with Van der Linde dropping back from the leading duo but not coming under major pressure from the pursuing AKKA-Mercedes of Marciello.

Mies was the first of the leaders to stop, handing over to Riberas, and Vervisch was soon replaced in the #17 by Leonard.

The #17 emerged with a very narrow advantage over the sister Audi R8 LMS and Leonard needed his wits about him to retain top spot. Once again the two leaders were nose-to-tail, with the #66 Attempto-Audi of Schothorst closing up to make it a three-way fight.

But, like his fellow countryman Stevens, Leonard was cool under pressure in the Brands Hatch heat and kept Riberas at bay. The British ace even managed to eke out a narrow advantage by the closing stages to secure a first Blancpain GT Series win of the season for both of the #17 Audi drivers.

Schothorst was untroubled on his way to P3, securing a second podium of the season for the impressive Attempto-Audi squad. Behind him Meadows kept the #88 Mercedes-AMG in P4 until the chequered flag, fending off a determined attack by the #63 Grasser Racing Lamborghini Huracan of Christian Engelhart. The German driver and teammate Mirko Bortolotti swept the Brands Hatch weekend last year, but had to be content with P5 in today’s second race.

Following their race 1 win, the #2 Audi endured a nightmare second outing as Stevens suffered damage and dropped to the back of the field, with Vanthoor eventually forced to retire the car early.

The Silver Cup category was won on the road by the #90 Mercedes, but the AKKA crew were later penalised for Manchester’s involvement in a first-lap crash that claimed both Team Parker Bentley machines and the #35 SMP Racing Mercedes. This handed the #37 3Y Technology BMW a class victory after all following their earlier disqualification.

In Pro-Am, Markus Winkelhock drove a superb first stint to run in P6, harrying Bortolotti’s Lamborghini before handing his #26 Sainteloc-Audi over to young teammate Nyls Stievenart. The French teenager held firm to secure his first class triumph in the Blancpain GT Series, despite late pressure from race 1 winner Bhirombhakdi.

Driver quotes
Will Stevens, #2 Belgian Audi Club Team WRT Audi R8 LMS: “There was huge pressure from the guys behind, so I had to focus on what I was doing because it’s always difficult to overtake here. We were very strong on the Indy section of the circuit, then struggling more with the car around the rest of the track. I knew we would pull away a little bit and then they would catch us again, so the most important thing was to not make any mistakes. We had a great pitstop – one of our best, to be honest – and we’re very happy with the result.”

Stuart Leonard, #17 Belgian Audi Club Team WRT Audi R8 LMS: “It was pretty exciting exiting pit lane with Alex right behind me! I didn’t get the best line into turn 1, so I had to defend into turn 2. Alex was very close during my stint, but I managed to keep a consistent gap. It’s amazing to win on home soil. This is actually my first Pro win in Britain, so that’s pretty cool.”

Carlo van Dam, #39 TP 12-Kessel Racing Ferrari 488 GT3: “It’s been a tough weekend. Our car doesn’t really like these bumpy old tracks, even if I do! But we managed to find some pace in the race and Piti built a comfortable lead, which I extended. We’ve picked up the points, so it’s job done.”

Markus Winkelhock, #26 Sainteloc Racing Audi R8 LMS: “I had a good start from P7 and gained one position, then got stuck behind Mirko Bortolotti during the first half of my stint. It’s almost impossible to pass here and I didn’t want to take a big risk, so I stayed behind. All in all, not too bad.”

The Blancpain GT Series will remain on British soil for its next event, with the second round of the Endurance Cup taking place at Silverstone in two weeks time (18-20 May). The three-hour contest will see the Belgian Audi Club Team WRT crew looking to continue a rich vein of form that now stretches to three successive race wins.