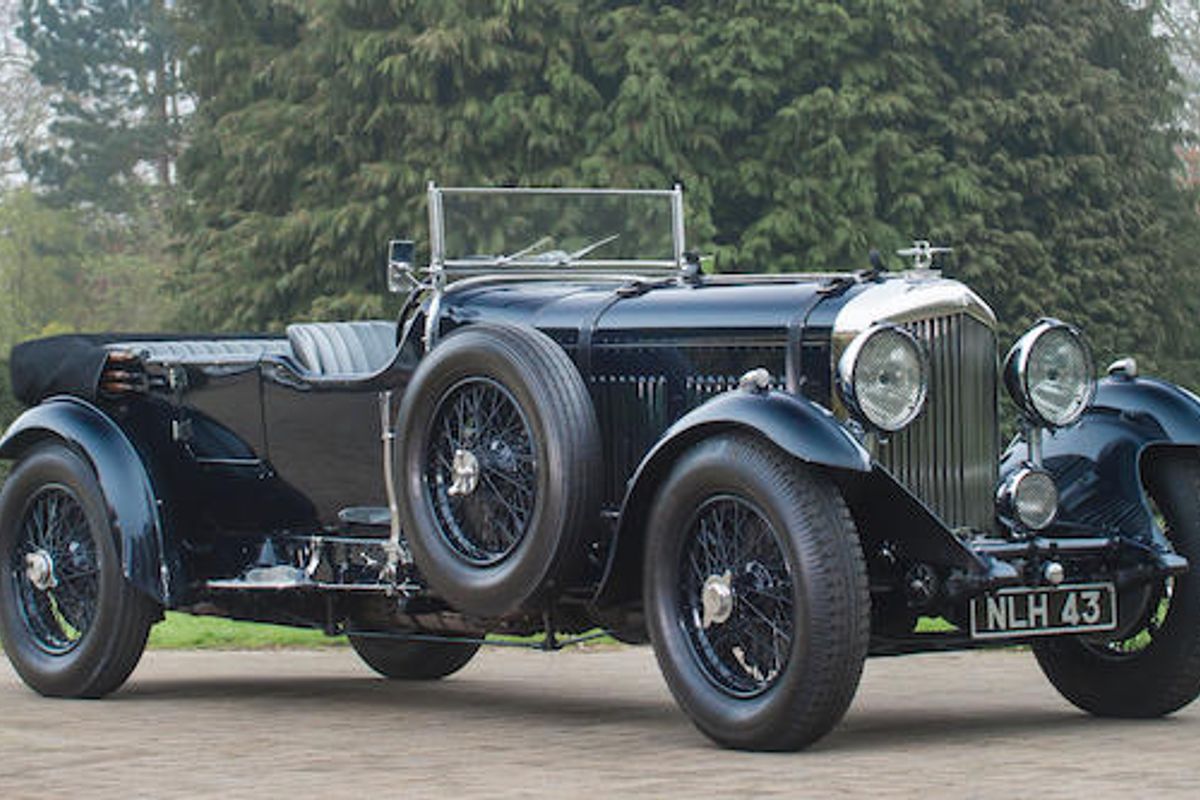 This magnificent 8-Litre is one of only 100 such cars produced by W O Bentley, of which only some 80 or so survive. Originally bodied as a limousine by Thrupp and Maberly, chassis number 'YR5094' was sent directly to Singapore where its Chinese owner used the Bentley for sporting adventures with his lady friends; the Bentley becoming known as 'The Harem Saloon'. During WW2, the Bentley was walled up inside a mine, returning to the UK in the late 1940s/early 1950s. Owned by a Mr Peter Quinn, the car received the UK registration mark 'NLH 43', which it retains today. Mr Quinn removed the original body but kept the original bonnet and scuttle.

He sold the Bentley to marque stalwart Peter Morley, most remembered for his endeavours with the Napier Bentley not to mention many more successful WO competition specials. Morley shortened the chassis to a wheelbase of 10' 10", fitted a stylish 2 seater body and raced the Bentley very successfully with the Vintage Sports-Car Club for a number of years.
The car's next owner, a Mr Posnett, dismantled it and re-lengthened the chassis to its 12' wheelbase. He kept 'NLH 43' until 2002 when, still dismantled, it was bought by John Cobbing, who commissioned The Vintage Workshop (Wayne Huckle) to undertake its restoration, in the course of which the car was re-bodied as a four-seater, two-door tourer, complete with Gurney Nutting-style helmet wings.

The chassis was restored to its original specifications, being rewired and rebuilt with new bushes, pins, etc, while the original one-shot lubrication system was overhauled. The engine was rebuilt with new valves, valve guides, water pump, front and rear water plates, oil drain tubes, etc, and fitted with a new bottom three-throw drive gear. Fully checked and sorted, the original crankshaft was kept due to its amazing condition, while the main bearings were cleaned and ground to approx. 0.012" undersize. New bronzes were made and re-white metalled, and it was decided to use new connecting rods and modern shell bearings - the best of both worlds. A complete new clutch lining and discs were fitted. All new bearings were used, and the crankcase and sump machined to accept modern oil seals.

The carburettors were stripped and rebuilt with new jets, needles, cork washers, etc, while the
Auto-Vac was similarly overhauled with new valves, seals, internals, etc. Renowned expert Tony Stairs rebuilt the magneto. A new ignition coil, points, and condenser were fitted, and the distributor overhauled. A new exhaust system was made with a 3" straight-through section as per the original design, while the silencer is straight-through with a centre baffle. The radiator was fully restored with a new core and re-chromed outer shell, while two new Kenlowe electric fans were fitted to improve cooling. The original fan assembly has been retained, although not fitted at the present time.

The gearbox was stripped and checked; all gears were found to be in excellent condition, and new bearings were used throughout the rebuild. The rear axle was dismantled, stripped and inspected, and the nosepiece removed. New half-shafts were fitted together with new wheel bearings, etc. A new crown wheel and pinion was designed and fitted, and the car now boasts a 3.21:1 final drive ratio giving it long legs on the motorway and also around country lanes without the need for an overdrive.

The front axle was stripped and new kingpins and bushes fitted. Stub axles were crack-tested and found to be sound. New wheel bearings and felt washers, etc were installed. Two original wheels were restored with new outer rims and spokes, then four new wheels were commissioned and built. Found to be in excellent condition, the steering column was dismantled and rebuilt with all new bearings. The brake servo too was dismantled and found to require a new leather seal and brass fingered disc underneath. All components were cleaned and the servo overhauled.

Following the restoration's completion, the Bentley's owner enjoyed numerous trips, including to Le Mans where the car was able to stretch its legs, behaving impeccably with no problems. A previous participant of the BDC Concours (2011 & 2012) plus the Chateau d'O Concours in Northern France (2014), and a familiar visitor to many a BDC Silverstone Race Meeting. Having enjoyed the Bentley tremendously the current owner has decided that the car should to pass to a new custodian, hence the decision to sell. Offered with a UK V5C registration Certificate, this magnificent 8-Litre would surely be welcome at any of the numerous celebrations planned for Bentley's 100th Anniversary in 2019.