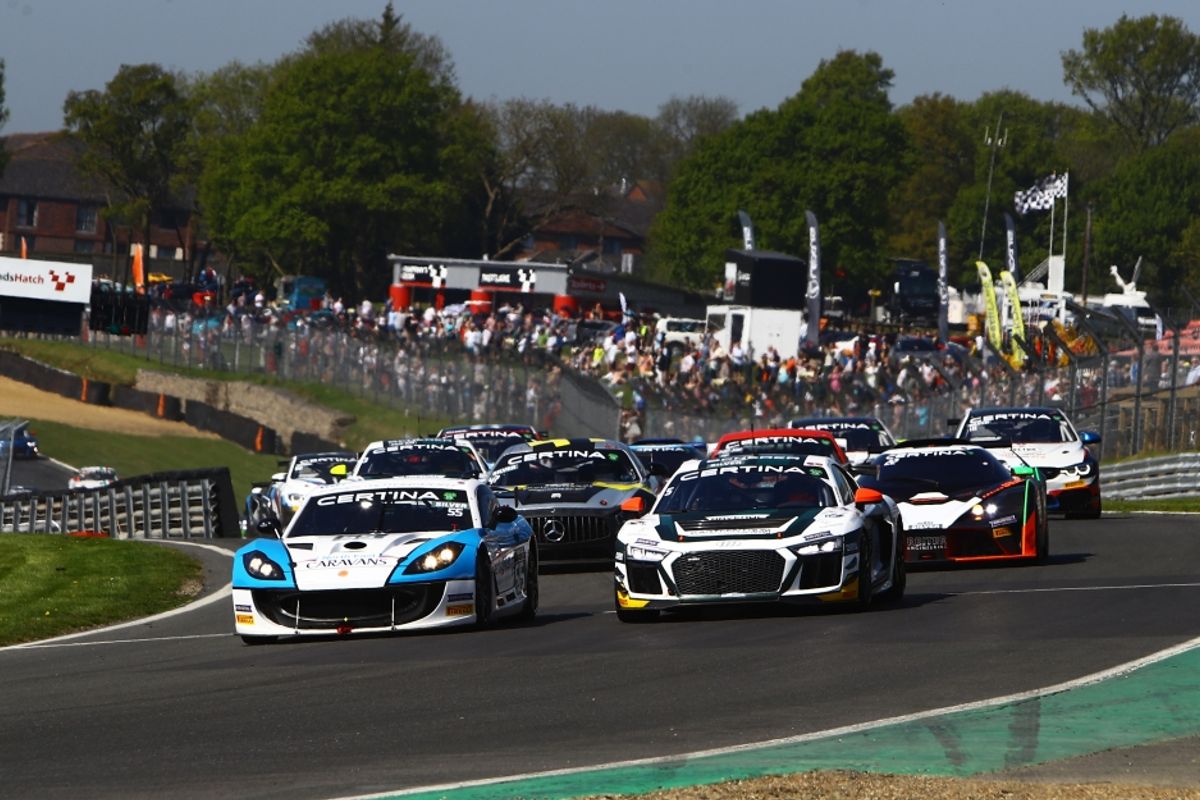 ing been heavier or higher…I could fit my feet under the front splitter!

“Race one went really well but, unfortunately, we were a tenth of a second too fast in the pits. Into race two, we hadn’t done more than five laps of green flag running with the extra weight and it wore and overheated the rear tyres. The Safety Car helped us jump people in the pits and also helped cool the tyres, which meant the car had a better balance at the end for Stuart and he did a great job.”

Stuart Middleton:
“We weren’t sure how the BOP [Balance of Performance] would affect us going into this weekend, they upped it as much as they could after Zolder and we thought it would be really bad. The car was different to drive but we still ended up pretty quick in qualifying, so they gave us another 35kg and we had to add 10mm more to the ride height – that was quite a significant difference.

“We were straight into the first race not knowing what the car would do, it was the heaviest we’d driven and highest on ride height too. The team did a great job, we were just unlucky in the first race. If we’d been a bit more conservative to wait a bit longer we’d have lost out to two cars leaving the pits, it was so close. It was great to win race two, though, two wins from two weekends is great.”

British duo shine on home soil despite Balance of Performance changes
There was absolutely nothing to separate the performance of the HHC team-mates in qualifying on Saturday, Ashington driver Middleton taking the opening session and posting a stunning 1m31.682 seconds lap to secure the race one pole position.

Milton Keynes racer Tregurtha, likewise, produced a sensational performance with a lap of 1m31.664 seconds and also managed to find the space he needed on the ultra-congested track to grab pole for race two of the weekend – his second pole position of 2018.

Off the back of the tremendous performance, though, championship officials decided to apply an extra 35kg of ballast to the No.55 Ginetta G55 and raise the ride height by 10mm ahead of raceday as part of the category’s ‘Balance of Performance’ ruling.

Providing the squad with an unknown going into race one, although with the knowledge it would have an obvious impact on overall lap time and tyre degradation, Middleton took the first stint and at the rolling start he retained the lead before the Safety Car appeared at the beginning of lap two.

Racing got back underway on lap seven but it wasn’t long before the Safety Car was deployed again, on lap 12. Running under caution past the opening of the pit-stop window, North East Caravans, Steel and Jelly and Spine Optics-backed driver Middleton then pitted at the earliest opportunity.

Tregurtha was able to depart the pits still holding the effective race lead, running third on track at that point, and at the re-start on lap 16 the Enlighten and Spine Optics-sponsored Tregurtha took the race lead proper when the three ahead finally served their mandatory stops.

On lap 17, though, a huge accident at Hawthorn Bend for the No.10 McLaren triggered a Safety Car period and ultimately led to a red flag stoppage at 75% race distance with Tregurtha and Middleton taking the win. Post-race, though, the penalty for a short pit-stop dropped them to 15th.

Determined to hit back in race two later in the afternoon, Tregurtha started from pole position and a great start for the Briton enabled him to see off the fast-starting Mercedes of Bas Schouten through Paddock Hill Bend before ending lap one just 0.4 seconds ahead.

Schouten remained close behind the Ginetta and on the sixth tour the Mercedes got the run into Paddock and edged Tregurtha to second. Enabling the third placed BMW of Gabriele Piana to also attack and go through at Druids, the HHC car was down to third momentarily but a drive-through penalty for the BMW meant Tregurtha moved back into second.

With the Ginetta suffering increased tyre wear with the extra weight onboard and lofty ride-height, Tregurtha soon came under attack from the Aston Martin of Matt Nicoll-Jones and the latter took second into Hawthorn Bend on lap eight. Three laps later, the HHC car was edged to fourth.

As the pit-stop window opened, Tregurtha was under increasing pressure from last year’s title winning BMW of Max Koebolt but the HHC driver rebuffed the challenge and stayed out for another lap before pitting – around the same time as the Safety Car was deployed.

Of the cars to have pitted, the No.55 Ginetta emerged onto the track in second place as the Safety Car continued to circulate and when the action eventually got back underway at the 25-minute mark Middleton was in second place but with half a dozen backmarkers ahead.

Getting a great run out of Graham Hill Bend, Middleton pulled alongside the leading Mercedes into Surtees, and the HHC driver duly took the lead with a terrific pass. Moving clear of his pursuers, and doing a good job of threading through traffic, Middleton went on to win by eight seconds.

Misano in Italy is the next destination on the 2018 GT4 European Series calendar with the third event of the season taking place over the weekend 23rd/24th June.