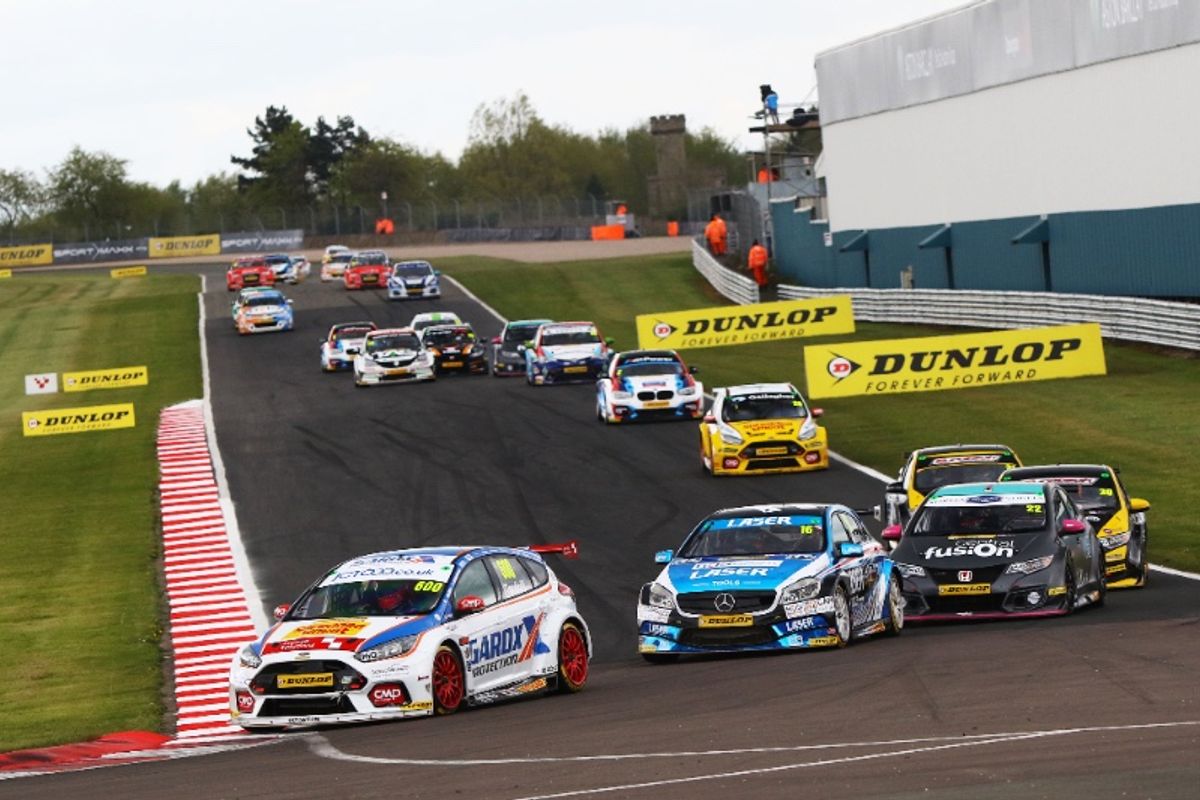 The fiercely competitive championship, in its 60th Anniversary year, all set for May 19-20 visit to Hampshire

Advance tickets available now from just £12 at thruxtonracing.co.uk – buy now and be in with a chance of waving the chequered flag!

Thruxton will be the next port of call for what is already proving to be a Dunlop MSA British Touring Car Championship campaign to remember, with 32 of the best tin-top stars set to take on the UK's fastest race circuit, 19-20 May.

The BTCC is celebrating its 60th, Diamond Jubilee, anniversary in some style so far this year, with typically fierce competition evidenced at two storming weekends at Brands Hatch and Donington Park – producing five different winners from the opening six rounds. There have been a host of new faces take to the podium, and somewhat of a changing of the guard in the Drivers' standings with the top eight's drivers harbouring an average age of just a little over 25.

Thruxton is set to celebrate what is all set to be a special weekend's racing by offering one lucky winner the chance to wave the chequered flag on the opening BTCC race – with anyone who has purchased or is set to purchase advance race day or weekend tickets for the meeting entered into the prize draw.

Changing of the guard

Last year at the Hampshire Speedbowl, as Thruxton is affectionately known, BMW secured a landmark 100th victory in the BTCC at the hands of Rob Collard and Colin Turkington, who took a round apiece, while Matt Neal sealed a win on home turf for Honda.

This year, though, the form-book certainly looks to have swung the way of the young-guns – headed at the top of the table by Speedworks Motorsport's Tom Ingram in the Toyota, who secured a pair of rostrum finishes at Thruxton last time around, and is also the only double winner so far this season.

Incumbent champ Ash Sutton was quickest back at the annual TOCA test-day a month ago and, currently fifth in the standings, he'll be looking to fire his Subaru Levorg to a maiden top-step appearance of 2018 and the start of his title defence proper. Judging by his pace back at that test, he'll be one to look out for.

The WIX Racing with Eurotech-run FK2-generation Honda Civic Type Rs have historically gone well around Thruxton's high-speed sweepers and if the outfit's start to the season is anything to go by, it would take a fool to doubt their race-winning credentials, especially given Jack Goff has already notched a victory this year and is sitting pretty in fourth in the overall standings.

The Mercedes-Benz A-Classes are perfectly suited to the balance and poise required around the Hampshire racetrack. Adam Morgan is hot on the heels of standings leader Ingram in second spot after his victory at Donington Park and the Lancashireman is twice a winner at Thruxton – it's shaping up nicely for Ciceley Motorsport. Aiden Moffat, in one of the sister Mercedes', is a man on a charge, too, after a podium double back in Leicestershire.

A host of other names are vying for top honours, with the intense competition of Britain's biggest motor racing spectacle making predicting the outcome of any one race, let alone the three that take place over a race weekend, an impossible task. Whatever the outcome, it's sure to be a day of unmissable action.

Thruxton itself celebrates its 50th Anniversary, and the beloved circuit, a favourite of many a driver, always yields unparalleled racing. In addition to the three touring car races, there are nine more top-tier encounters on the TOCA package – the Renault UK Clio Cup, the Ginetta championships and the F4 British Championship.

Visitors will get their first proper look at the circuit's brand-new, industry-leading £2 million hospitality facility - The Thruxton Centre – ahead of an official opening on Sunday 3 June amid a weekend of 50th Anniversary celebrations.

Highlights there include 15 special races as well as high-speed demonstrations from Williams’ 1983 FW08C, wielded by ex-F1 star Karun Chandhok, and a number of other iconic racing cars and bikes. There will be appearances, too, from a number of high-profile guests including Murray Walker and Nigel Mansell.

"We're always thrilled to host what is undoubtedly the premier four-wheeled series in the country," said Thruxton Group Managing Director, Bill Coombs. The BTCC has storied history – spanning 60 years – and the championship never fails to come up with the goods over a race weekend.

"As we've seen this season, it's entirely unpredictable. You don't head into a BTCC race weekend knowing who will be coming out on top – it's just too close to call, and that makes for some of the best doorhandle-to-doorhandle racing around with 32 cars all racing within a second or so.

"The test day a month ago gave us an insight into just how competitive it'll be come race day. Some of the times were quicker than we've ever seen before here from BTCC machinery – it really whetted the appetite.

"The beauty of the TOCA package means that not only do you get the three headline BTCC races, but nine further races of the highest quality across a number of leading championships."

Advance tickets for the BTCC’s visit, 19-20 May, are available from £12, with weekend passes with paddock access running to just £40. Saturday grandstand seats are an additional £5. Accompanied children aged 15 and under will be admitted free of charge.