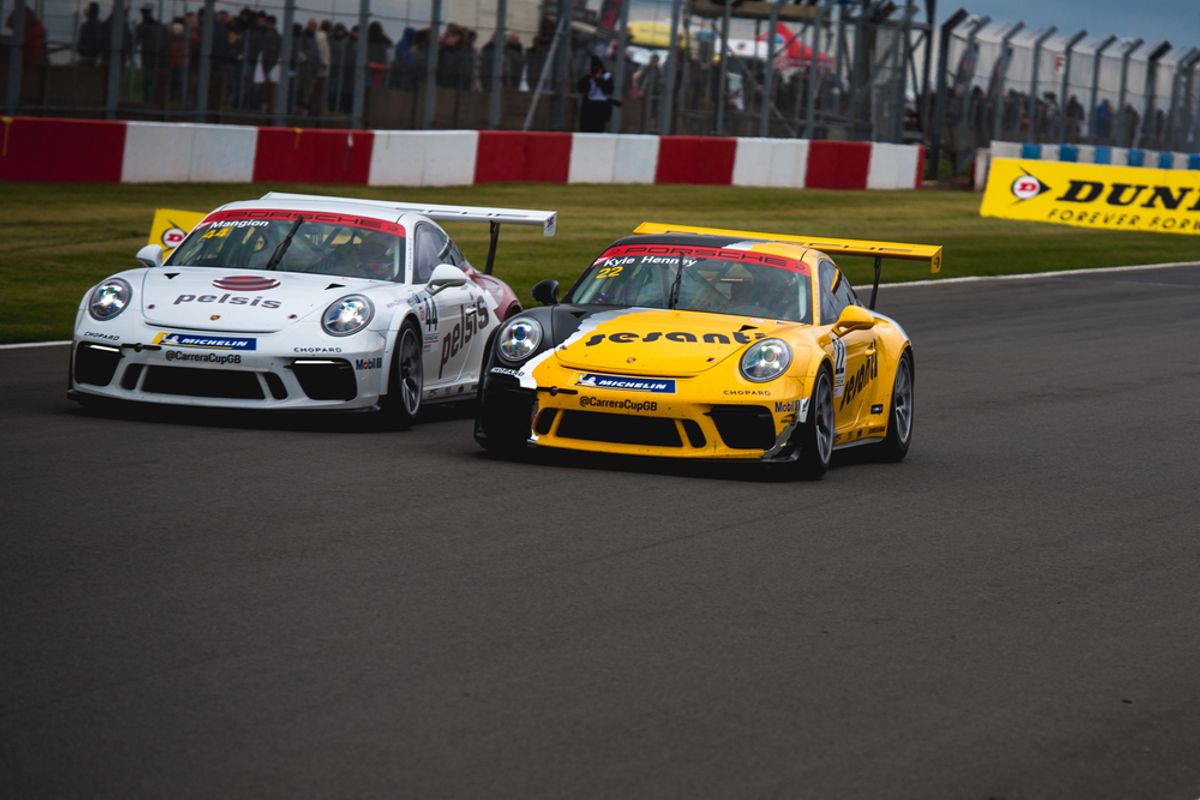 The fastest single marque GT racing championship in the UK, the Porsche Carrera Cup GB, travels to historic Monza in Italy for its 2018 blue riband event in support of the European Le Mans Series (ELMS). Each of the four rounds of the season so far has been won by a different driver, and one of the world’s fastest and most exciting race tracks will host the battle to see who – if anyone – will become the first double winner of an unpredictable season.

The championship has ventured overseas in the past with rounds held at Spa Francorchamps and Le Mans, but it has never raced in Italy. Of those drivers competing, just two have significant experience of Autodromo Nazionale Monza’s famous high-speed 3.6-mile circuit.

The two Carrera Cup GB drivers acquainted with the hallowed tarmac of Monza are the current points leaders and two of the race winners, Dino Zamparelli (Redline Racing) and Tio Ellinas (Slidesports). Both visited the world's third oldest purpose-built motor racing circuit whilst competing in the GP3 Series, prior to making a successful switch to sports car racing with Porsche. In 2013, the pair were involved in a dramatic first corner collision at Variante del Rettifilo resulting in retirement.

Ellinas heads to Monza off the back of a maiden pole position and first sports car victory at Donington Park. The Cypriot dominated a wet qualifying session at Donington, converting his form into a race win after holding off mounting pressure from Zamparelli. Despite this, the experienced Zamparelli has maintained a slender gap at the top of the points table and will be looking to extend this as he returns to his second home.

Always amongst the fastest runners and now in his third year, Lewis Plato (JTR) also secured his maiden win at Donington. Ellinas and Plato will undoubtedly arrive at Monza with a newfound confidence following their results, and both will look to use that psychological boost to their advantage in Italy.

One of the four race winners this season, George Gamble (Amigos Team Parker) is the highest placed Rookie, third overall in the championship standings. An impressive recovery through the field at Donington underlines not only his pace, but also his racecraft, a useful tool on a slipstreaming circuit like Monza.

His three fellow 2018 race winners will not be Zamparelli‘s only major challengers though. Dan Harper (JTR), the 17-year-old Porsche GB 2018 / 2019 Junior, has already made an impression during the first four rounds. The Northern Irish star took his first podium in only his third race, has one fastest lap already to his name, and left nobody in any doubt as to his ability to race wheel-to-wheel at Donington.

Tom Wrigley (JTR) was another on-form driver at Donington, and carries that momentum forwards together with team mates Plato and Harper. On the long, fast straights of Monza, where slipstreaming plays a significant part in outright speed and race position, the three team mates could be well placed.

James Kaye (GT Marques) and Will Bratt (IN2 Racing) may have only recently come to the 2018 Porsche Carrera Cup GB season – Bratt as recently as Donington – but both have significant top-level motorsport experience. Already adapting quickly to the second-generation 911 ‘Type 991’ GT3 Cup, either could spring a surprise in Italy.

In the Pro-Am category, Jamie Orton (JTR) maintains his championship lead from the opening rounds, but he faces serious challenges from Donington race winner Dan Vaughan (Motorbase Performance) and podium finisher Rory Collingbourne (Welch Motorsport). Both have gained speed every weekend so far to reel in the experienced Orton, while all three have proven they can run high up the pack.

Rookie Seb Perez (Amigos Team Parker) is another star of the close-fought category, a podium finisher at Donington with a strong team mate in Gamble in the pacesetting category. Similarly, Esmee Hawkey (GT Marques) has been on the category podium and, despite a challenging two rounds last time out, will be looking to continue progress at Monza. Bringing the most experience is Justin Sherwood (Team Parker Racing), the seasoned veteran steadily scoring points and, in the main, navigating the fierce fighting in the heart of the pack. Similarly well positioned with experience and speed is G-Cat Racing team manager Greg Caton. Caton is a proven race winner and, as he proved at Carrera Cup Le Mans in 2017, is more than capable of adapting to new circuits.

Am category points leader Peter Kyle-Henney (IN2 Racing) renewed his battle with Rookie rival Peter Mangion (Team Parker Racing) at Donington. The pair are never far apart and going to Monza Kyle-Henney tops the standings by just three points from Mangion. Double Donington podium visitor Gary Eastwood (G-Cat Racing) sits just behind and has made a smooth transition to his 911 GT3 Cup.

Another driver with proven podium potential in the category is former BTCC racer Richard Hawken (Slidesports). Slidesports took their first Porsche Carrera Cup GB victory with team mate Ellinas last time out, so Hawken will no doubt find that experience within that team a useful tool. Similarly, Fraser Robertson has come back from his spectacular roll at Brands Hatch to continue his development with the Redline Racing squad.

Reigning category champion Shamus Jennings (G-Cat Racing) has endured a difficult start to his season as has perennial frontrunner Iain Dockerill (Asset Advantage Racing). Neither has lost their pace, and both will be hoping to turn their luck around in Italy.

Racing at Monza not only provides drivers with an opportunity to compete on an international circuit, but also serves up new challenges. For those new to the championship in 2018, almost half the grid, the strong slipstream effect – similar to that at Le Mans in 2017 – will be a completely new experience.

Particularly for the Pro category drivers, this visit to Monza may not be their last as their careers progress. For example, the circuit near Milan is regularly visited by the Porsche Mobil 1 Supercup in support of Formula One. Furthermore, by supporting the ELMS which features several customer 911 RSR teams, the two international rounds underline the position of the Porsche Carrera Cup GB within the international Porsche Motorsport pyramid.

Round five, a 30 minute race, will take place on Saturday immediately following ELMS qualifying. Round six, a longer 45 minute race, gets underway on Sunday morning prior to the start of the ELMS 4 Hours of Monza. Follow the lead up to rounds five and six via Twitter at @CarreraCupGB.

Following her studies into concussion in motor sport, which has included working with the Porsche Carrera Cup GB for the majority of the past two seasons, Dr Naomi Deakin has won the 2018 Watkins Scholarship. Named after motor sport safety pioneer Professor Sid Watkins, the Scholarship offers a funded research position with the Global Institute for Motor Sport Safety, the research partner of the FIA.

Deakin, who is a Clinical Research Associate in the Department of Neurosurgery at the University of Cambridge, was selected by a panel of experts consisting of Formula One Managing Director Ross Brawn, German Motor Sport Federation Medical Director Michael Scholz and Global Institute General Manager Research Laurent Mekies. She becomes the first doctor to win the Scholarship, with the two previous winners being engineers.

Deakin is set to undertake and support further research into concussion and utilise the Global Institute’s engineering expertise to provide important insight into the findings. She has been involved in motor sport medicine for a number of years, and for the past two seasons has included the Porsche Carrera Cup GB in her research.

Deakin said: “What the Watkins Scholarship will do is allow me to create a vital bridge between motor sport medicine and the engineering aspect of the sport, as one of the things we really want to be able to understand is what the threshold value is for concussion. There is some excellent work on frontal head protection systems and helmet design which have happened in recent years, but what we have seen in terms of injuries is that we have moved from very severe traumatic brain injuries towards more mild brain injury, which is where concussion is.

“As we are moving towards that lower end of this spectrum, we really don’t understand what sort of forces, be it their magnitude, or their direction, or the rotation, that actually cause the injury. So what this project will hopefully achieve is to help provide insight into that engineering data and link it to the medical data that we collect.”

Deakin will continue to be based within the TOCA paddock for the duration of the scholarship and will remain with the Porsche Carerra Cup GB at every meeting over the next year.