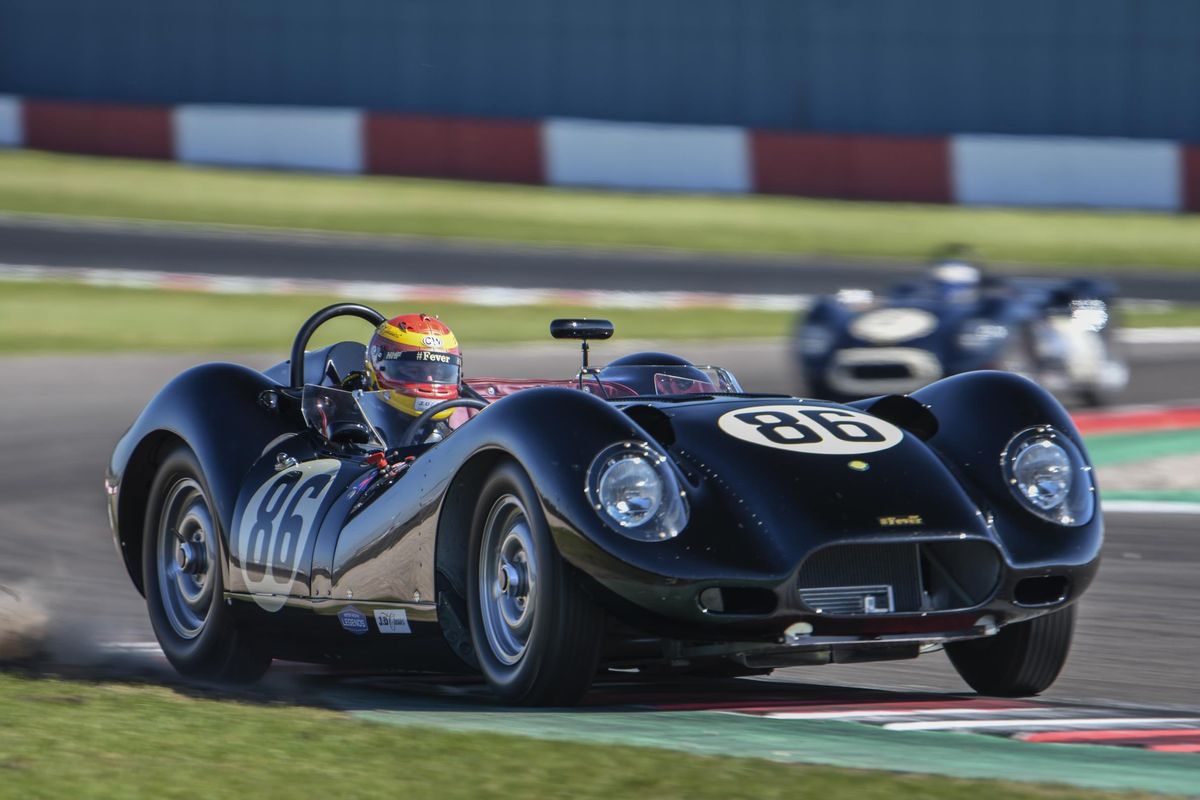 The JD Classics Lister Knobbly took victory in the Stirling Moss Trophy, while the Bastos Rover claimed third in the Historic Touring Car Challenge with Tony Dron Trophy
Latest set of successful results kickstart a busy period for JD Classics as it takes on the famous Monaco Historic and Mille Miglia later this month

JD Classics is celebrating another successful racing weekend after it scored a victory and a podium place at the Donington Historic Festival over the Bank Holiday weekend.

It was in the Stirling Moss Trophy that the team achieved its biggest success, with Chris Ward competing in the JD Classics Lister Knobbly. Ward managed to set a time of 1:19.8 early on in Qualifying and earning a solid third place, before an oil spillage made the track treacherous and lap time improvements unlikely.

Making its Motor Racing Legends debut, the car and driver quickly made ground up to 2nd place on Lap 3 of the race and commencing the chase for the front running Lotus. Catching backmarkers, the gap between the leading duo increased before a Safety Car was deployed for an on-track incident around the pit window, where most cars came in to stop. With the Safety Car and pitting period complete, the gap between the top two came down to a few seconds. The battle between the pair intensified before Ward’s Knobbly was able to pass the leading Lotus, as it succumbed to a mechanical failure, and onto the chequered flag first.

A third place start for Steve Soper in the Bastos Rover gave the team every hope of securing another outstanding result in the Historic Touring Car Challenge with Tony Dron Trophy. A mechanical gremlin with the car saw it lose positions from the rolling start, falling to a low of 8th before being forced into an early pitstop. With the problem identified and resolved and Chris Ward taking over the helm, the Rover quickly set consecutive fast lap times, storming its way through the field when everyone made compulsory stops. In spite of the cars technical issue and the challenging conditions posed by the hot weather, the JD Classics Rover ran a strong race to claim a solid 3rd place at the finish flag.

The Ecurie Ecosse XK120 took to the RAC Woodcote Trophy race in 21st place after a tough qualifying session. Working his way through the field, Steve Ward set impressive lap times before handing over to Josh Ward for the final stint before the car fell victim to a burst tyre late on, ending a promising run through the pack and forcing the car into retirement but still managing to retain an excellent third in class.

JD Classics Founder, Derek Hood, said: “A truly magnificent result from our entire team to deliver yet another fantastic set of results at the Donington Historic Festival. Our engineers back in the facility at Maldon deserve all the plaudits for preparing and maintaining the cars expertly trackside. We are still at the start of the motorsport season and have come away with an outstanding set of results, which we hope will stand us in good stead as the racing year continues!”