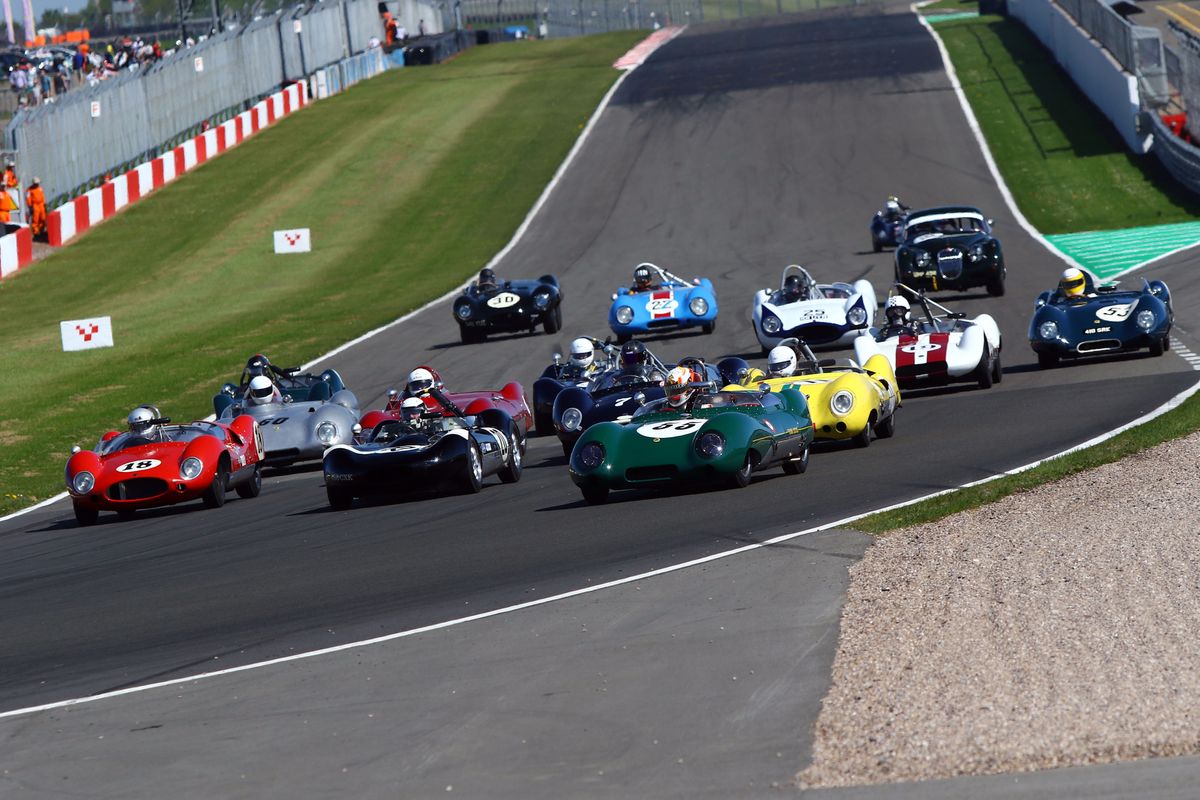 The eighth Donington Historic Festival (Donington Park, May 4, 5 and 6) was one of the best yet, with the brilliant May bank holiday sunshine presiding over three superb days of historic motorsport and bringing the crowds with it.

As well as famous marques there were some famous faces, with the event proving particularly popular with Touring Car drivers past and present. Current BTCC drivers Andrew Jordan, Adam Morgan and Sam Tordoff had great fun, as did big ‘tin top’ names from the past, Steve Soper, Patrick Watts and John Cleland. Cleland secured second place in the Super Touring Car Challenge in his original Vauxhall Vectra, while Andrew Jordan, sharing his Austin GT40 with his father Mike, stormed to victory in the HRDC ‘Touring Greats’. Steve Soper was a busy man, taking 3rd place in the Rover Bastos Vitesse he shared with Chris Ward in the huge grid that was the Historic Touring Car Challenge with Tony Dron Trophy, and going two better to win the U2TC Trophy for pre-66 under two-litre Touring Cars in his Ford Lotus Cortina.

British GT duo Jon Minshaw and Phil Keen were also in the mix, driving to second place in a Lister Knobbly in the Stirling Moss Trophy race, while former Le Mans racer Ray Mallock showed his skill in a Formula Junior, being very, very narrowly pipped to the chequered flag by Christopher Drake in the first of the two FJHRA/HSCC ‘Silverline’ front-engined Formula Junior races, and enjoying a clear victory in the second race.

Swapping two wheels for four, motorcycle racer Maria Costello OBE was an enthusiastic addition to the well-known names behind the wheel this year, racing an Austin A30 Academy in the HRDC ‘Touring Greats’, and ‘The Grand Tour’ test driver Abigail Eaton, battled it out with the Super Tourers in the mighty Holden Commodore. Musician Chris Rea was out in his 1957 Morris Minor Panda car - with the appropriate number 999 - and Travis drummer Neil Primrose campaigned an Austin A35 Academy.

Another welcome addition to the Festival was the Derek Bell Trophy grid, with chest-rumbling F5000 cars creating an incredible sound that echoed round Donington Park.

The race action wasn’t restricted to the track, with several races requiring driver changes in the pitlane; something made a little more arduous by the extreme heat.

Festival visitors enjoyed free access to the race paddock and pitlane walks, and the pit garages always had something interesting going on, such as the firing up of the wonderfully noisy Lola T330 each day.

F1 car track demonstrations on Saturday and Sunday commemorated the famous 1993 Donington Park European Grand Prix, while memories of Donington’s days as an RAC Rally stage were brought to life by tyre-smoking Group B rally car demonstrations. Nimble little historic karts buzzed round the Melbourne loop in numbers, like a swarm of very entertaining wasps, and the Sporting Bears Motor Club raised funds for Spinal Muscular Atrophy Research by offering passenger Dream Rides in a terrific range of classic and supercars, including a supercharged, 740+bhp Ford Mustang and a McLaren 620S.

Donington Park’s Infield was a popular place to be, not because the mature trees gave some welcome shade, but because of the superb array of classic cars brought along by the dozens of car clubs that took part. Porsche Club GB had its usual impressive presence, its members making the most of the incredible views of the track from their stand, but PCGB was out-numbered this year by Simply Mustangs UK, who amassed an astonishing 270 Ford Mustangs on the Saturday. 40 of these led the lunchtime parade in an unforgettable sight - and those who got the chance to take part clearly loved every second.

Festival visitors enthusiastically embraced the new elements that MSV has introduced to the track over the winter, including the superb new café, bar and restaurant, Garage 39, located right in the heart of the race paddock, and the new loos, which everybody said was a much-welcome improvement!

Finally, the skies above Donington Park had a temporary break from the modern-day air traffic from East Midlands Airport and played host to the Spitfire and Dakota of the Royal Air Force Battle of Britain Memorial Flight.