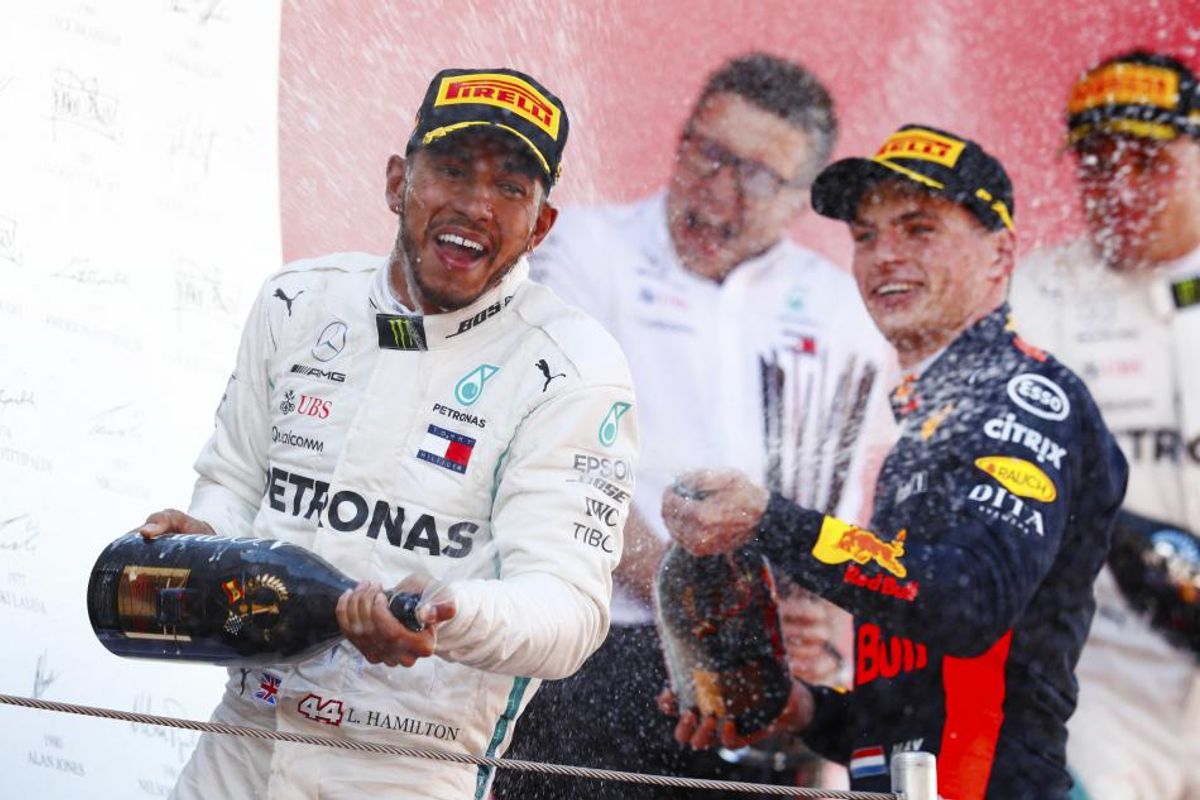 Lewis Hamilton powered to a dominant Spanish Grand Prix win as Mercedes scored its first 1-2 finish of the season, with Valtteri Bottas finishing ahead of Red Bull Racing’s Max Verstappen as Ferrari’s Sebastian Vettel dropped from second place to fourth after a mid-race pit stop.

Vettel had stolen second place from Bottas in a dramatic start to the race, but the German then pitted early to change to medium tyres. Red Bull’s chasing drivers meanwhile went deep into the race before taking on fresh tyres and when a Virtual Safety Car was deployed after Force India’s Esteban Ocon stopped at the side of the track, Ferrari elected to pit Vettel for more tyres.

He ceded position to Bottas and Verstappen but in the late stages of the race he couldn’t find a way back past the Red Bull and he was forced to settle for fourth.

When the lights went out for the start, Vettel got away well and using the slipstream created by the Mercedes ahead the German rounded Valtteri Bottas on the outside to steal P2. Further back, Haas’ Kevin Magnussen had to correct in mid-corner in Turn 3 and directly behind his team-mate Romain Grosjean was forced to brake hard. The Frenchman went into a spin, sliding off the track and then back on – into the path of Renault’s Nico Hulkenberg and Toro Rosso’s Pierre Gasly. The collision was significant, though all three drivers escaped unhurt.

With debris scattered across the track and three cars requiring removal, the Safety Car was called into action and stayed on track until the end of lap six.

On the re-start the frontrunners all held their position, with Hamilton leading Vettel ahead of Bottas, Räikkönen and the Red Bulls of Max Verstappen and Daniel Ricciardo, Further back McLaren’s Fernando Alonso was the only driver to make a significant gain in the re-start, passing Force India’s Esteban Ocon to claim the final points position of tenth.

The race then settled until Vettel triggered the pit stops at the end of lap 17. The German took on mediums and rejoined in P7 ahead of SAI. Mercedes responded, pitting Bottas, who also took mediums, but a slow stop, allied to Vettel blasting past Magnussen into Turn meant the Finn could no pass the Ferrari.

Räikkönen caused the next shift in the order on lap 24. Verstappen, who was right behind the Finn reported that the Ferrari had some kind of engine problem and within moments Räikkönen slowed dramatically.

Verstappen and Ricciardo blasted past the Ferrari as Räikkönen was told the stop the car but the Finn eventually brought his car back to pit lane where he retired from the race.

Ahead Hamilton pitted at the end of lap 25, taking on medium tyres and slotting into P2 behind new leader Verstappen, though the Red Bull and third-placed team-mate Ricciardo needed to pit.

The Australian was the first of the Red Bulls to pit, at the end of lap 33, with Verstappen pitting a lap later. Both took on medium tyres to go to the end of the race. The order now saw Hamilton lead Vettel by 10 seconds with Bottas third ahead of Verstappen and Ricciardo. The Red Bulls though had much fresher rubber than either Vettel or Bottas, both of whom had made early stops for new tyres.

On lap 41 Esteban Ocon pulled over at the side of the track and the VSC was deployed. During the cautionary period Ferrari responded to the Red Bull threat and decided to pit Vettel for new mediums. The German rejoined in fourth place between the two Red Bulls as Bottas moved into P2 ahead of Verstappen.

The Dutch driver hit trouble after the VSC withdrew, however. He clipped the back of Lance Stroll’s Williams as he attacked the backmarker and damaged his front wing. That might have given Vettel hope but with Verstappen told that his wing was “structurally OK” despite end-plate damage, the gap widened, with Verstappen stretching his advantage over Vettel to 2.1s by lap 49.

The pair repeatedly traded personal bests over the following laps but Vettel could find no way to close in on Verstappen and Ferrari were left to rue ceding track position to Mercedes and Red Bull.

At the front, Hamilton was untouchable, powering to his 64th career win with more than 18 seconds in hand over his second-placed team-mate. Despite Vettel’s attentions, Verstappen was faultless over the final laps and claimed Red Bull Racing’s 150th podium finish with 0.7s seconds in hand over the sole remaining Ferrari.

Ricciardo added 10 points to Red Bull’s haul with fifth place, while Kevin Magnussen finished sixth for Haas ahead of Renault’s Carlos Sainz. McLaren’s Fernando Alonso took his fifth points finish of the season with eighth place ahead of Force India’s Sergio Pérez. Tenth place went to Sauber’s Charles Leclerc who scored points for the second race in a row.