Magical Monza thrills with wins for Zamparelli and Gamble 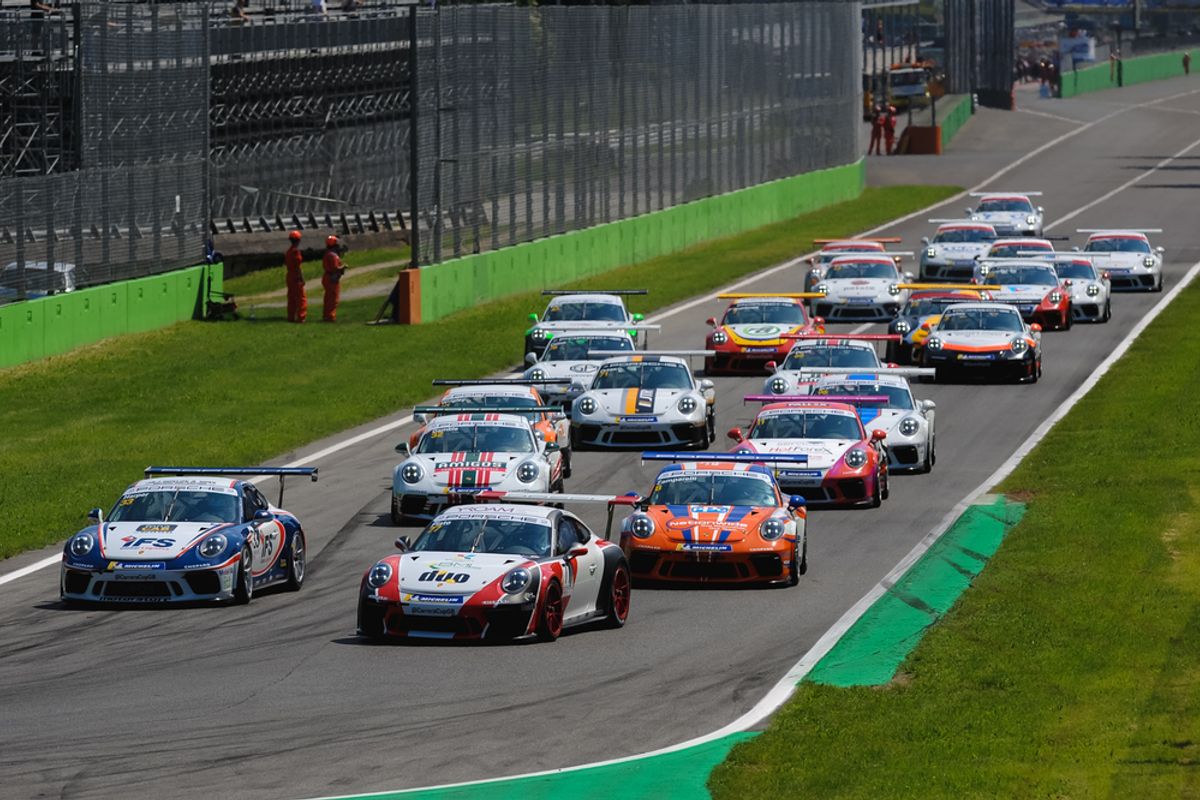 Jamie Orton (JTR) emerged from the weekend retaining his lead of the Pro-Am championship, despite retiring from race one and starting near the back in race two. However, two category victories for Seb Perez (Amigos Team Parker) and two podi-um finishes for Dan Vaughan (Motorbase Performance) will have Orton looking over his shoulder. Category glory for Peter Kyle-Henney (IN2 Racing) in race one, and Iain Dockerill (Asset Advantage Racing) in race two also ensured the continuation of a close Am championship battle.

Zamparelli, who is of part Italian heritage, was challenged for his win in race one and second place finish in race two at Autodromo Nazionale Monza’s famous high-speed circuit by championship rival Tio Ellinas (Slidesports Engineering). Ellinas finished on the podium in both races directly behind Zamparelli, just six points now separate the Pro category drivers at the top of the championship table.

Race one
Dan Harper (JTR) took his maiden pole position in qualifying for round five of the championship, with team mate Lewis Plato (JTR) alongside him on the front row, while overall championship points leader Dino Zamparelli (Redline Racing) started from third on the grid. All 22 cars lined up in scorching Italian temperatures for a timed race of 28 minutes duration.

Of the top three qualifiers it was Plato who made the best start, moving clear of Har-per to lead the race. Zamparelli also passed the 17-year-old Porsche GB 2018 / 2019 Junior setting up a close battle between the two for second position in the run down to the first corner. As the three cars arrived at Monza’s famous Rettifilio at the end of the start / finish straight, contact between Harper and Plato ended both driv-er’s races with Zamparelli taking the lead.

As the rest of the pack concertinaed together behind Harper and Plato several driv-ers made contact with one another, spun, or took avoiding action by leaving the track. Former BTCC star James Kaye (GT Marques) came together with Jamie Or-ton (JTR), Orton then collided with Will Bratt (IN2 Racing). The incident resulting in retirement for both, but Kaye was able to continue his race. In order to clear the four stricken cars from the track the Safety Car was immediately called into service.

At just over half distance Zamparelli led Gamble, the pair trading fastest overall lap times, with Tom Wrigley (JTR) and Ellinas not far behind. Battles also raged in Pro-Am between Caton and Dan Vaughan (Motorbase Performance), Jennings and Kyle-Henney in Am – all four cars were nose to tail in an exciting dice for position. Vaughan eventually led Caton for third in Pro-Am, Kyle-Henney moved into the lead of the Am category ahead of Jennings with Iain Dockerill (Asset Advantage Racing) in third.

With 10 minutes of the race remaining just half a second covered Gamble, Ellinas and Wrigley in the chase for second position overall. The closely matched trio put pressure on one another at every opportunity through Monza’s sweeping corners and down its long straights. Meanwhile, Vaughan mounted a serious challenge on Caton for the final Pro-Am podium place, the pair battling side by side through Vari-ante Ascari, Vaughan eventually coming out ahead. In Am, Dockerill passed Jen-nings for second position in the category.

Just a few minutes from the end of the timed race Zamparelli had managed to build a five second lead over Gamble in second. Ellinas was closer than ever to Gamble who then visited the gravel trap at Curva Parabolica, Ellinas moving to P2 and Wrigley to P3 as a result. Gamble continued his race in fourth, which is the order in which the Pro runners crossed the finish line. In Pro-Am, Perez maintained his lead of the category with Hawkey taking second, Vaughan claiming the final category po-dium spot. Kyle-Henney secured Am victory ahead of Dockerill and Jennings.

For his part in the first corner incident on the opening lap of the race Harper was dis-qualified from the final classification, he also receives a deduction of four points from his race licence and is docked eight championship points. Furthermore, for the first corner incident involving him, Kaye receives two points on his race licence and is docked two championship points.

As part of the 2018 podium procedure, overall winner Zamparelli selected at random the number 6 ball, which reverses the grid positions of the top six overall race finish-ers from round five. This formed the starting grid for round six; Hawkey, Perez, Gamble, Wrigley, Ellinas and Zamparelli.

When the lights went out Hawkey and Perez got good traction from the front row, Gamble and Wrigley also made good starts from row two – all four were bunched together in the first few metres away from the start line. In the run down to the first corner Pro-Am runner Justin Sherwood (Team Parker Racing) and Am runner Peter Kyle-Henney (IN2 Racing) collided ending their races. Several cars made contact with one another before continuing, Will Bratt (IN2 Racing) and Fraser Robertson (Redline Racing) also retired as a result of the first corner melee. The two Amigos Team Parker drivers, Gamble and Perez, headed the field out of Rettifilio before the Safety Car was immediately called into action to clear the stricken vehicles of Sher-wood and Kyle-Henney.

With 15 minutes of racing to go, Ellinas ran wide at Curva Parabolica while mounting a challenge on Perez for P2, allowing championship rival Dino Zamparelli (Redline Racing) to take advantage and move up from P4 to P3, his run also carrying him past Perez for P2 overall. Shortly afterwards a recovering Ellinas put a pass on Pe-rez at Ascari making the order at the front: Gamble, Zamparelli, Ellinas. With 12 minutes of racing remaining, Hawkey spun going into Parabolica from second place in a closely contested Pro-Am category fight, soon afterwards Greg Caton (G-Cat Racing) passed Vaughan at the first Lesmo for P2. In the Am category Dockerill maintained his lead while behind Rookie Peter Mangion (Team Parker Racing) over-took Shamus Jennings (G-Cat Racing) for second in Am.

As the race reached its conclusion, Gamble, Zamparelli and Ellinas were running nose to tail, Gamble being forced to defend his lead from a looming Zamparelli. In Pro-Am, Caton spun at Ascari with only five minutes of the race remaining before coming into the pits where his race ended, the incident allowing Vaughan to retake P2 in the category ahead of a recovering Jamie Orton (JTR). Pro-Am points leader Orton had gradually worked his way up through the pack having started the race on the penultimate row – a result of his retirement in the first race.

Rookie Gamble crossed the line to clinch overall victory, his second of the season, with Zamparelli and Ellinas taking the remaining podium places. Newcomer Perez claimed top honours in Pro-Am, followed across the line by Vaughan and Orton. Category winner Dockerill was joined on the Am podium by Mangion and Jennings. For his performance Perez was handed the Driver of the Weekend accolade, Amigos Team Parker were awarded Team of the Weekend.