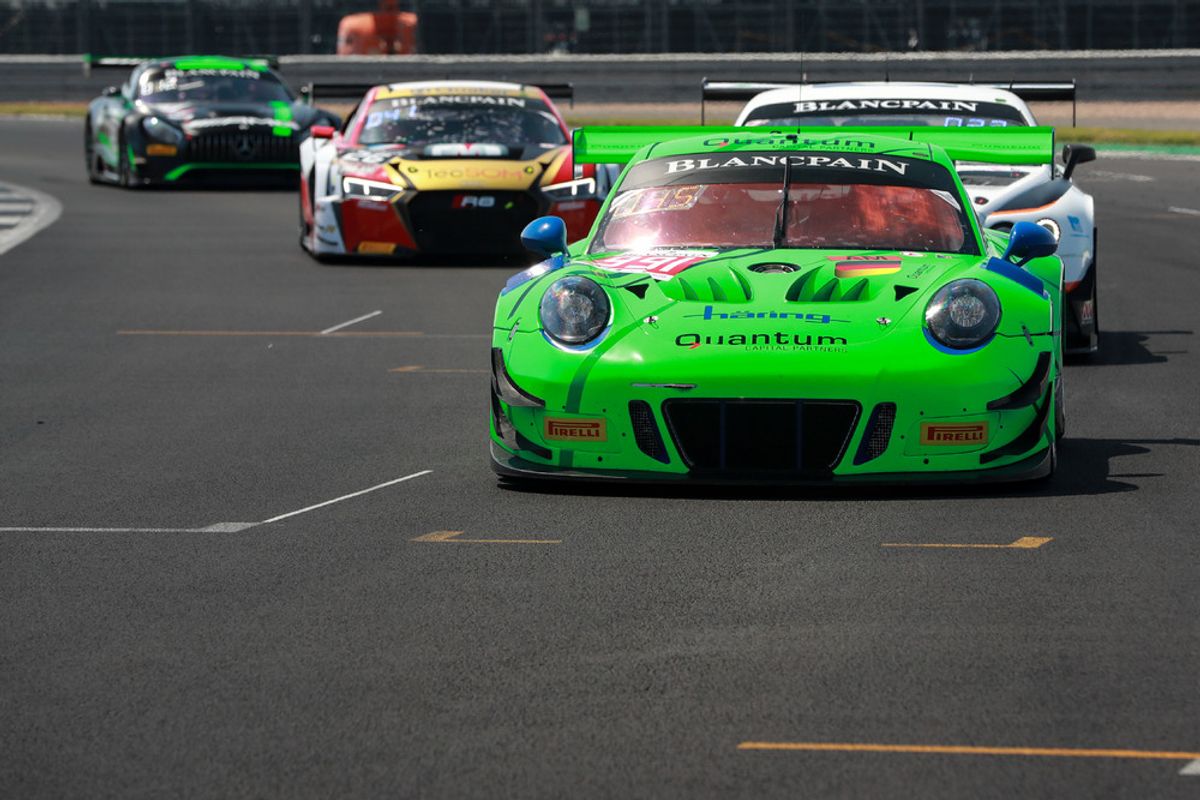 The Porsche customer team Herberth Motorsport scored a podium spot at round two of the Blancpain GT Series Endurance Cup at Silverstone (UK). On Sunday, the all-German line-up of Jürgen Häring, Edward-Lewis Brauner and Wolfgang Triller secured third in the Am-class. Manthey-Racing narrowly missed out on a top ten placing. The three Porsche works drivers Romain Dumas, Frédéric Makowiecki (both France) and Dirk Werner (Germany) contested the category for professional drivers sharing a Porsche 911 GT3 R and finished the race eleventh in a 25-car field. On the 5.901-kilometre Formula 1 circuit northwest of London, a total of 50 GT3 vehicles from twelve manufacturers competed in four different classifications.

Dumas, Makowiecki and Werner took up the race from eighth on the grid. In the jostling throng of the start, however, Makowiecki had to relinquish several positions, and the well-balanced Pro-class competition hampered a better result. The German-French trio were flagged off after three hours as eleventh overall.

In a repeat of the season-opener at Monza in mid-April, the Herberth Motorsport squad from Jedenhofen, Germany, fielded a Porsche 911 GT3 R. Sharing the cockpit of the 500 hp customer sport racer from Weissach, Häring, Brauner and Triller tackled the classification for gentlemen drivers. Triller, the defending champion of the B-category in the Porsche Carrera Cup Deutschland, excelled in the final stint with a consistently fast pace and moved up the field from fifth to third in the #991 car.

The Silverstone race took place in sunshine and 25-degree temperatures and was the second round to run over 180 minutes after Monza. Next up on the calendar is the six-hour race at Le Castellet, France, on 2 June, which will start in the late afternoon and run into the night.

Comments on the race
Sebastian Golz (Project Manager 911 GT3 R): “The result is not what we’d hoped for. I’m happy for the Herberth team, of course. Two of the three drivers haven’t raced here before, which underlines just how strong their performance was. Manthey-Racing managed to improve on its qualifying performance, although this wasn’t clearly apparent due to the two interruptions during the session. The race ultimately showed how important it is to start up the front. It’s really difficult to overtake in this highly competitive field.”

Frédéric Makowiecki (Porsche 911 GT3 R #911): “I had a good car for my whole stint. I lost a couple of places right at the start and I couldn’t overtake later. However, the car’s handling was good, and our Porsche felt strong especially under braking.”

Dirk Werner (Porsche 911 GT3 R #911): “The times were incredibly close, which made it hard to gain any ground. I had a Mercedes in front of me and a Lamborghini behind me – and that’s how the order stayed for almost an hour. The car’s handling was good and it was great fun to drive. But I was hampered twice while lapping slower traffic and that cost a lot of time.”

Romain Dumas (Porsche 911 GT3 R #911): “All in all, we had a solid race. At the beginning of my stint the car felt really good, but then the tyres started to vibrate strongly. I had to back off and couldn’t attack anymore. The level of competition in this series is very high, and for this reason you have to be able to go all-out from start to finish.”

Jürgen Häring (Porsche 911 GT3 R #991): “The race went really well. Had we not lost a little time in the pits perhaps second place would have been possible. Personally, my stint was great. However, our final driver Wolfgang Triller was particularly strong. Wolfgang drove consistently fast laps that were almost matching the pace of the professionals. That was truly impressive.”

The Blancpain GT Series Endurance Cup
The Blancpain GT Series Endurance Cup is reserved for race cars that comply with FIA GT3 regulations. Storied racetracks, cost-effective conditions of participation and equality in terms of technology thanks to the Balance of Performance form the framework of this customer-oriented championship. The season highlight, the 24 Hours of Spa, is also part of the global Intercontinental GT Challenge, in which Porsche teams compete with the 911 GT3 R. SRO Motorsports Group organises both series.