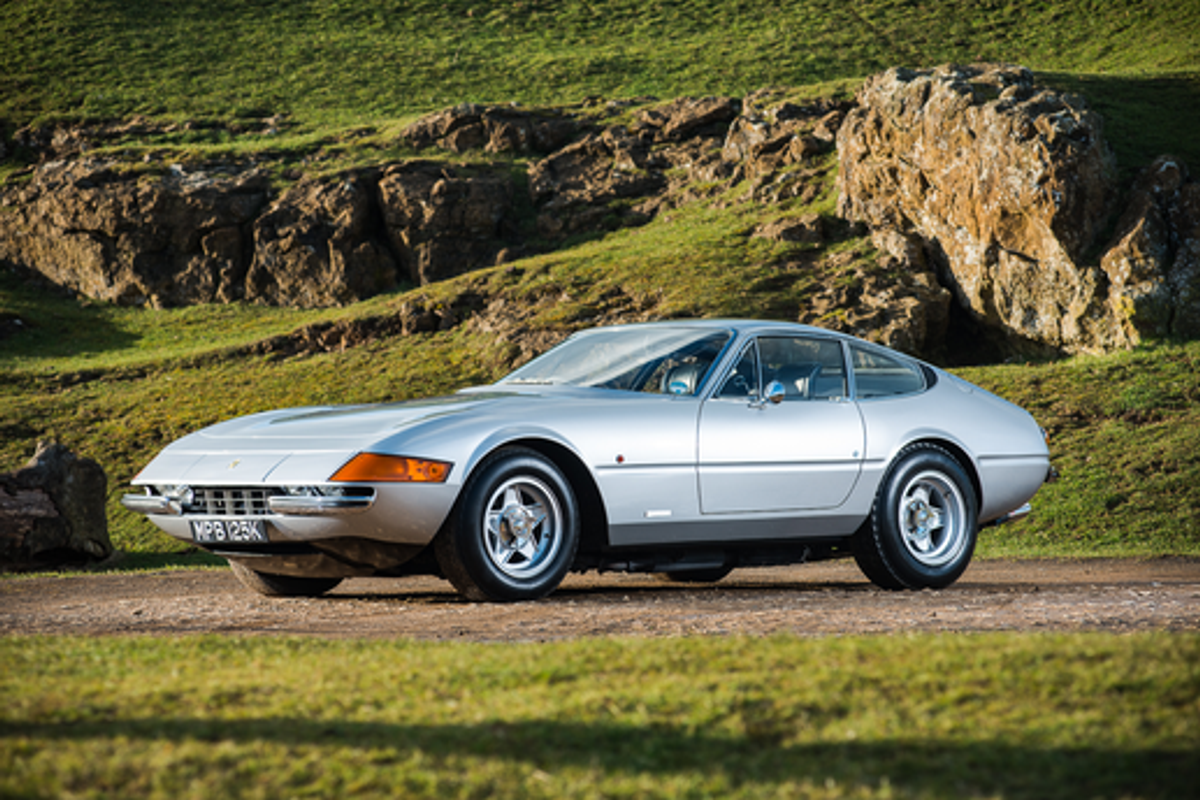 An original UK-supplied, right-hand drive, Ferrari 365 GTB/4 Daytona. One of only 158
Finished in Argento Auteuil with a contrasting interior trimmed in Blue VM3015 Connolly hide
A mere 35,900 miles from new supported by a fascinating history file
The engine was fastidiously rebuilt in early 2012 by Iain Tyrell at Cheshire Classic Cars
The original leather seats, door trims and the dashboard refurbished using period-correct materials
Without a doubt, one of the finest examples currently available

Two years after Lamborghini debuted the mid-engined Miura in 1966, Ferrari launched its defiantly traditional and determinedly contrasting alternative, the 365 GTB/4. Almost immediately the 365 GTB/4 gained its ‘Daytona' moniker as a result of Ferrari's 1-2-3 result in the 1967 24-hour race at the famous Florida circuit.

The Daytona's engine and handling certainly didn't undermine its racing nomenclature. The 4.4-litre, 4-cam V12 produced an astonishing 352bhp and, despite its, less than slimline, 1,633 kilos, the Daytona was billed as the fastest road car in the world at the time. Not only was 174mph more than brisk, but, crucially, it was faster than the Miura. The five-speed gearbox was mounted at the rear for a more optimal weight distribution and helped give the Daytona its predictable handling and solid road-holding.

Like so many Ferraris of the period, the Daytona's beautiful bodywork was designed by Pininfarina with the car built by Scaglietti. The delicate front was cleanly cut with both pop-up and Plexiglas headlight varieties, the rear slope was suggestively rakish, and a Kamm tail provided further clues that this was a serious motor car. The wheel arch flares, although elegant in proportion, are the only real overt notion that this car has significant pace.

We are delighted to offer this exquisite, UK-supplied, right-hand drive Ferrari 365 GTB/4 Daytona supplied new on 10th May 1972 by Maranello to H.W. Motors of Walton-Upon-Thames. Chassis #15835 was finished in Argento Auteuil with a contrasting interior trimmed in blue VM3015 Connolly hide. Air-conditioning was ordered as an extra and the car was supplied new to classic car enthusiast and historic racer, Mr Jeremy Agace, wearing registration ‘MPB 125K’ the number it still bears to this day.

Without doubt, one of the finest examples currently available, this car has covered a mere 35,900 miles from new, a figure which is supported by a fascinating history file containing over 20 old MOT Certificates, copies of the original factory order form, letters from the supplying dealer, and invoices from respected marque specialists including Colin Clarke, QV London, SMDG, and Cheshire Classic Cars.

In early 2012, whilst in the hands of the previous owner, the car was treated to a full engine rebuild under the watchful eye of Iain Tyrell and his team at Cheshire Classic Cars. Twelve brand new, original old-stock Borgo pistons were sourced and each cylinder liner was bored and honed to suit. The crankshaft was polished, the cylinder heads skimmed, and new inlet and exhaust valve guides fitted to complete the unleaded conversion. At the same time as the engine was out, an ex-Connolly craftsman carefully refurbished the original leather seats and door trims and the dashboard was recovered using original ‘mousehair’ fabric, completing the stunning look of the cabin today.

Chassis #15835 has passed through the hands of some significantly fastidious collectors during its time and we are pleased to be given the opportunity to bring this wonderful Ferrari to market after six enjoyable years with our private vendor. Supplied with a UK V5c, a Driver’s Manual, and MOT tested until 25th September 2018, this handsome, matching numbers 365 GTB/4 is one of only 158 UK-supplied cars and is believed to be one of fewer than 15 finished in Argento.