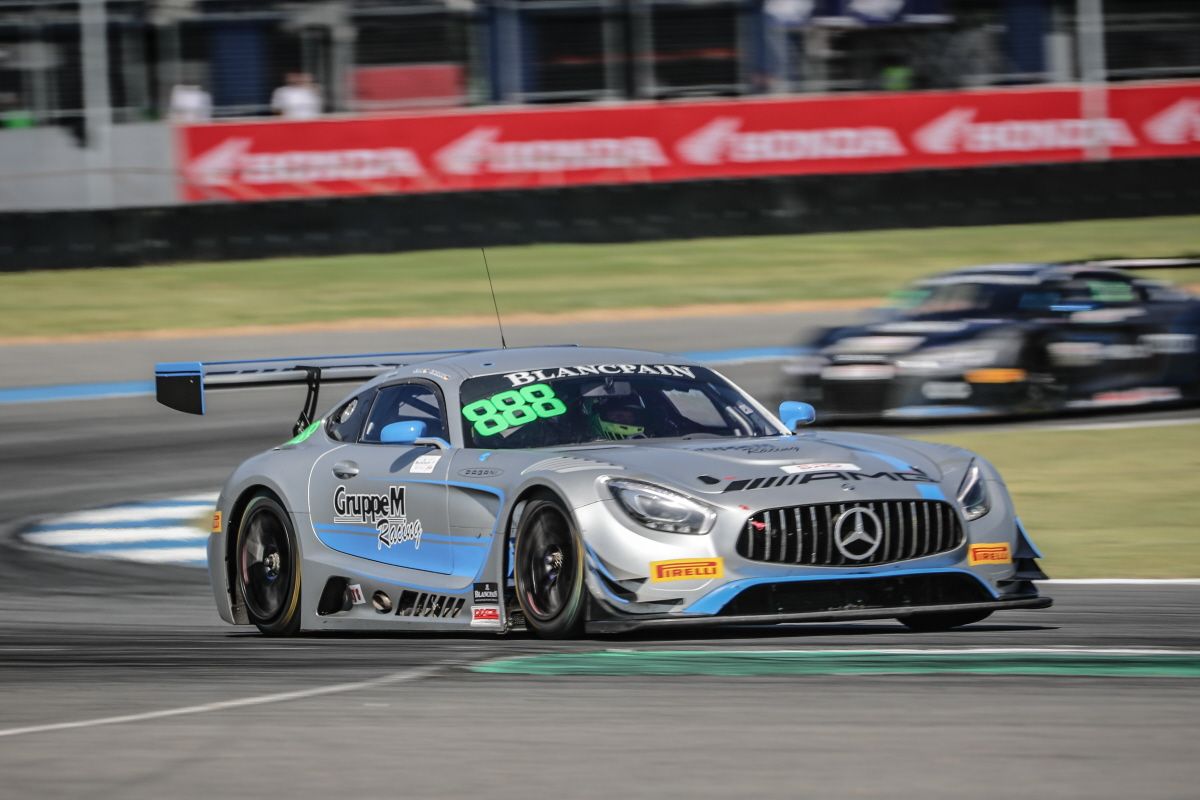 Chang International Circuit in Thailand witnessed another magnificent performance from points leading Blancpain GT Series Asia squad GruppeM Racing on 12th/13th May, with double victories in GT3 and GT4 during rounds three and four of the season.

Arriving in Thailand leading the GT3 team standings, as well as holding the joint lead in the GT4 drivers’ championship, GruppeM celebrated huge success in Buriram with an increased advantage of 27 points in the GT3 entrant battle and the squad opened a 14 point cushion in GT4.

Most notably, the successes were achieved with a radically changed driver line-up in the team’s three-car entry as a result of a ruling imposed by championship organiser SRO following the season opener at Sepang in Malaysia – GruppeM Racing was forced to change its ‘Bronze’ graded drivers.

Patric Niederhauser, partnered in Thailand by Markus Pommer, took his second GT3 win in race one as well as the Silver Cup success. In the second encounter, the duo had to settle for 13th overall in the No.999 Mercedes-AMG GT3.

In the No.888 car, a new line-up of Maxi Buhk and Alexander Mattschull – replacing Brice Bosi and Raffaele Marciello – took a clear victory in race two after bouncing back from the disappointment of a puncture in the opening contest.

Reinhold Renger was the sole participant in GT4 for GruppeM, with team-mate Russell Ward prevented from racing, and the German took a clean sweep of class wins with a very competitive and consistent performance. Renger now looks set to complete the season as a single entry.

Car No.888 – Maxi Buhk
“There were one or two moments [in race two] where it was a bit close, to defend, but overall the car was good and Alexander [Mattschull] did an amazing job as well. GruppeM and Mercedes have done an amazing job with the car, it was a perfect race.”

Car No.999 – Markus Pommer
“[Race one] was actually quite tough because our pitstop wasn’t perfect – another car was in front of us, so I lost maybe two seconds trying to get around it when I left the pits. Lapping the GT4 traffic was difficult, and I actually had a moment where I nearly crashed, which is how the Lambo got past. But then the team confirmed he had a penalty so I relaxed.”

Car No.666 – Reinhold Renger
“Two wins was unexpected to be honest, it was super-hot today [Sunday]. The car was really stable from the start, I took the lead after two laps and then I could make my speed. The track is really beautiful, I really like this place.”

Incredible team performance keeps GruppeM title defence well on track
Niederhauser secured pole position for race one of the weekend by just a tenth of a second with Mattschull putting the sister GT3 car fourth on the grid, the Pro-Am pole position, and at the start the Swiss driver managed to maintain the lead.

Under pressure from the outset, Niederhauser started to edge away from the pack from lap five onward and he continued to pull clear with a strong drive. After the mid-race driver change pit-stop window opened, he pitted the No.999 car at the end of lap 19 with a lead of almost five seconds.

When the race order settled, Pommer was just 0.7 seconds ahead of the No.19 Lamborghini and the pair circulated pretty much nose-to-tail lap after lap. On the 27th tour, though, Pommer was badly baulked by some slower GT4 traffic and lost the lead of the race as a result. Four laps later, however, the Lamborghini had to serve a penalty and Pommer moved back ahead to win by 1.4 seconds.

Mattschull was edged back to eighth overall on the opening lap and stayed there until an enforced pit-stop on lap seven after suffering a highly unfortunate puncture. Still required to pit again for the mid-race driver-change, which occurred on lap 20, Mattschull and Buhk ultimately ended the race an unrepresentative 17th overall and seventh in Pro-Am, two laps down.

In GT4, Renger had to start from the back of the field after having his times from qualifying removed due to a pit-lane speeding infringement but an extremely strong opening lap meant he scythed his way through into the top three.

Taking second in GT4 on lap two, Renger then began a superb see-saw battle with the No.81 BMW but an unfortunate spin after the pit-stops looked to have scuppered any hopes of a win. However, a time penalty for the BMW enabled Renger to retake the lead of the race and the victory.

For round four, Buhk qualified the No.888 car on the GT3 pole position and maintained the lead at the start under significant pressure at Turn One. Soon managing to edge away from the pursuing No.28 Ferrari, as the race neared the end of the first quarter of an hour the Ferrari closed back in onto the tail of the No.888 Mercedes-AMG.

Prior to the mid-race pit-stop, Buhk did manage to open a slight advantage again and after the driver-change Mattschull pressed-on at the head of the field. With a huge lead over the chasing pack, the German went on to take the chequered flag by four seconds.

Pommer, from sixth on the grid, was held out wide at the second and third corners and was elbowed down to ninth place. Coming under attack from two Lamborghinis, Pommer didn’t put a wheel wrong as he held position. Niederhauser took over at mid-distance and ran just outside the top 10 but a drive-through penalty dropped the car to 13th in the final classification.

Renger, starting on GT4 pole position this time, was edged back to second early on but quickly moved into the lead again and was then able to control the race. Never under any realistic threat, the GruppeM Racing driver coped with his second double-stint of the weekend admirably in very hot in-car temperatures.

Blancpain GT Series Asia makes the first of two visits to Japan next with rounds five and six of the season set to take place on Saturday, 30th June, and Sunday, 1st July, at Suzuka International Circuit.