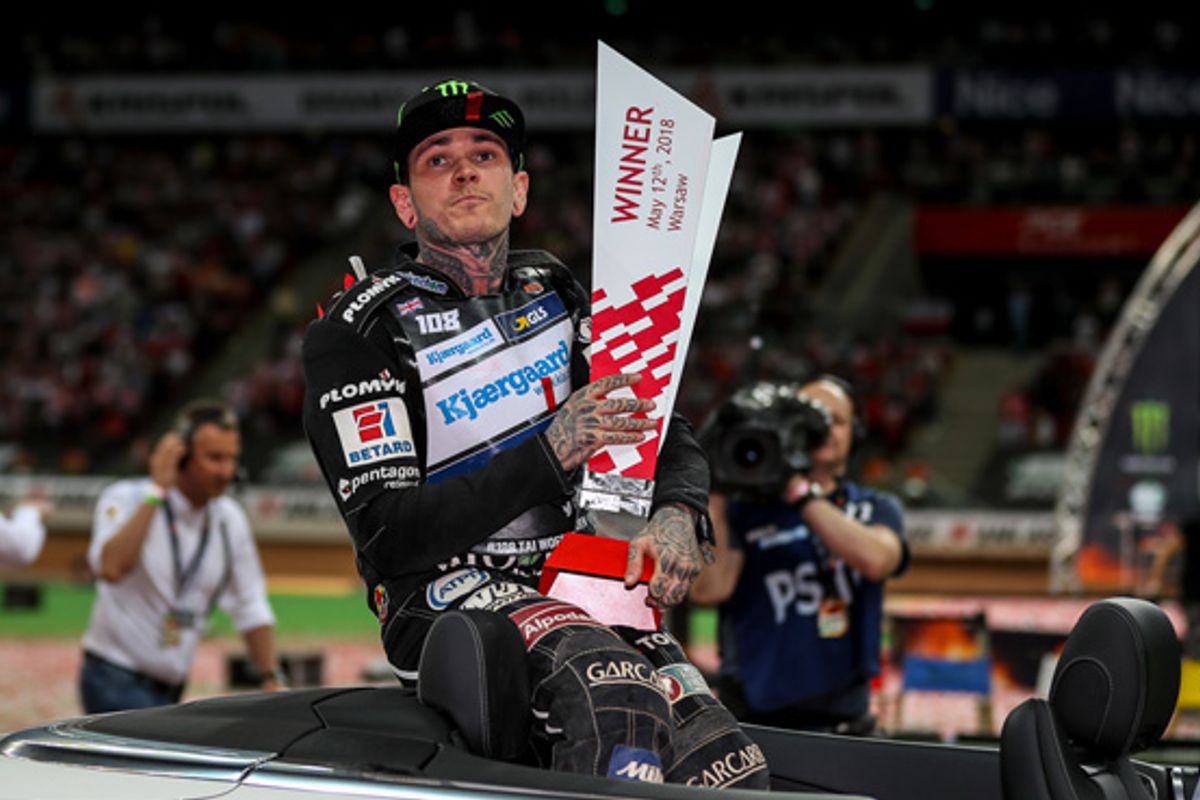 GREAT Britain Speedway Team has named its team for the inaugural Speedway of Nations tournament – and there’s a sensational return for two-time World Champion Tai Woffinden.

Warsaw SGP winner Woffinden is joined by British Champion Craig Cook and double Under-21 Champion Robert Lambert as Great Britain goes in search of its first team victory since 1989.

GB lines up alongside Australia, Sweden, France, Italy, Czech Republic and Finland in Event Two in Manchester on June 5, with only the top three teams progressing to the final in Wroclaw, and team boss Alun Rossiter admits that it was tough to choose his final three.

He said: “It was a hard choice and it’s no secret that I was choosing from four riders really, but I just felt that Craig deserved the spot after his performances the past weekend when he got a maximum in Poland and won a very tough GP Challenge qualifier in Germany.

“To win a round like that, where the standard was very high, is great for Craig and I’m hoping he’s ridden himself into some form. I’ve spoken with him at length and he’s moving in the right direction and I think that on form, he is one of our top three riders.

“Robert Lambert’s form has been very impressive this year, in Sweden, Poland and the UK, and although he is officially the reserve, the way the rules work means you can put your reserve in any race at any time, so Robert won’t be going there to make up the numbers at all.”

Rossiter also heralded the return of Woffinden, who will lead the side after a two-year exile; “It’s obviously great to have Tai back and we’re a much different team with him in it, his standards are so high and it’s going to be good to have him with us – I’m excited and I think we’ve got a really strong side.
“I have to say that Dan Bewley was very close and his time will come, his form this season has been sensational and I have no doubt that he’ll be a big part of our future, maybe this one came just a bit too soon but Dan has a huge future with us that’s for sure.”

With GB lining up in Event Two, Event One takes place in Teterow, Germany on June 2 where three from Germany, Denmark, Russia, Latvia, USA, Slovenia and Ukraine will qualify for the Final which will be raced over two days in Wroclaw on June 8 and 9.

POOLE promoter Matt Ford hopes the return of Richie Worrall can help the Pirates to defeat Wolverhampton at Wimborne Road tonight (Wednesday).
Worrall missed last week’s narrow win over Rye House due to injury but is back in the side for the visit of second-placed Wolves, who would go top of the Premiership with an away win.
Ford said: “Wolves turned in a good performance at Leicester and will be gunning for a full haul of away points when they arrive here I'm sure.
“But I feel we have turned a corner now following those early season defeats and we were consistently strong throughout the team at home to Rye House last week.
“Richie's return is great news. He performed superbly on our home track last year when stepping in and I'm sure he will do the same again if his performance away at Rye House is anything to go by.”
Wolves boss Peter Adams said: “On our away travels we haven’t had a lot of luck and there’s always been somebody not firing. So when they all start firing at the same time, I think we’ll deal with most teams in this league no matter where we go.
“Sam (Masters) will do much better in the No.4 position and I’m quite sure that Monday was just one bad day at the office for Rory (Schlein).
“He’ll be fired up to return to the form he’s shown for the rest of the season and I’m confident he’ll score more than he managed on Monday.”

SOMERSET will be without both regular reserves for tonight’s (Wednesday) Premiership clash with Belle Vue at the Oaktree Arena.
Jonas Jeppesen is set for another scan on his broken hand, whilst Bradley Wilson-Dean misses out with a stiff neck after crashing in his GP qualifier at the weekend.
Todd Kurtz and James Shanes guest for the Rebels, whilst the Aces operate rider-replacement for Steve Worrall.
Somerset boss Garry May said: “I felt we had put ourselves in a good position up there, and was hoping to get the draw from it but it wasn't to be.
“We need to maintain our unbeaten home record and make sure that we don't allow them to pick anything up when they are here.”
Belle Vue star Dan Bewley said: “Any team at home is a threat, especially one with the world champion as their captain. Monday was just an unfortunate set of circumstances for us and Wednesday is our chance to prove it.
“We’ve got Max [Fricke] and Craig [Cook] back with us and we’ve already shown that, between the six of us, we can cover rider replacement without too much drama so I think it’ll be a good night.”

RYE House boss Peter Schroeck is remaining upbeat ahead of tonight’s (Wednesday) KO Cup second leg meeting with Swindon.
The Rockets return to Hoddsedon facing a mountainous 28-point deficit after losing 59-31 at Blunsdon on Monday.
The home side are still without Nikolaj Busk Jakobsen due to concussion, and have called up Kevin Doolan to guest.
Schroeck said: “We gave them a good hiding at the end of last season, and it’s a case of dusting ourselves off, re-focusing, and going all-out in the return.
“Nothing is impossible, and we have to maintain our self-belief.”
Swindon star Troy Batchelor said: “If we throw a 28-point lead away then we won’t deserve to be in the next round, that’s for sure.
“Rye House will be better at home than they were at our place, but we’ll turn up on the day and do what we do, and let Rosco (Alun Rossiter) show us the way!”

BIRMINGHAM get their National League campaign up and running tonight (Wednesday) when Isle of Wight are the visitors to Perry Barr.
The fixture will see the return of home favourite Jack Parkinson-Blackburn who has re-signed for the Brummies in place of injured skipper Mitchell Davey.
The Warriors operate rider-replacement for Scott Campos and have Jamie Sealey and Josh Embleton coming in at reserve.
Birmingham star Danyon Hume said: “The team have been doing brilliantly but we know we need to carry that on now our league fixtures are about to start.
“The Isle of Wight have got some good riders with the likes of Ben Morley and Ben Hopwood and we’ll have some good battles with them I’m sure.”

EDINBURGH reserve Matt Williamson has decided to take a break from the sport.
Williamson has stressed he is not fully quitting speedway but a tough run early in 2018 has left him needing to find his love for racing once again.
He said: “At this moment in time my head's messed up and I just need some time away. It's been a really hard process for me but I've been getting that stressed and wound up I've been making myself physically sick.
“One of my engines went at Peterborough, and then on Saturday at Lakeside after the meeting I drained my engine and one of the valves had snapped and rattled around the engine. God knows how much that will cost, so everything is just on top of me at the moment.
“It doesn't matter how hard I try, nothing's going right at the moment. It's not doing me any good as a rider or in my own self, it's making me look bad on track and it's making me feel bad.
“It's not doing the team any good, we can clearly see the frustration in the team, the management and the fans. I need to have a break to get myself back happy again.”