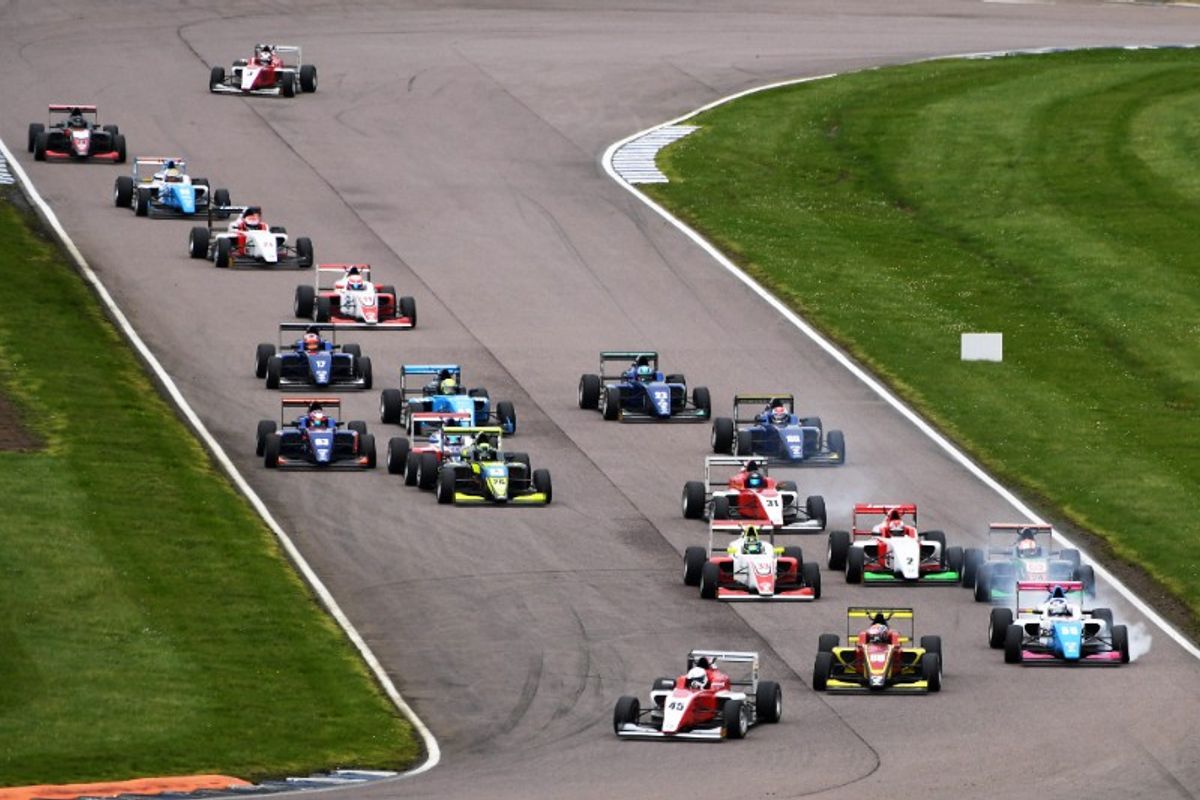 The BRDC British F3 Championship storms into Snetterton this weekend, with a multi-national grid of aspiring F1 stars poised for an ultra-tight battle at the Norfolk circuit. Forecasts suggest the warmest weekend of the season beckons, and there is plenty of red-hot British F3 action to look forward to.

After Enaam Ahmed’s domination of the series last year, this year’s title chase couldn’t be more different. Five separate drivers have already stood on the top step of the podium, and just 11 points separate the Nordic duo of Linus Lundqvist and Nicolai Kjaergaard at the top of the standings.

Double R’s Lundqvist enjoyed a stellar weekend last time out at Rockingham, standing on the podium for all three races, with his weekend culminating in a battling victory in the final race, his second triumph of the year. The Swede went wheel to wheel with previous title leader Nicolai Kjaergaard on more than one occasion, with Kjaergaard recovering well from a retirement in the opening race of the weekend to claim two second places.

Kjaergaard has so far proved to be the master of overtaking. New rules for race two on each weekend sees all race one finishers reversed on the starting grid, ahead of non-finishers, and points are earned in the race for finishing positions and for the amount of positions gained. With Kjaergaard failing to finish race one, he was forced to charge through from the back in race two, gaining 11 places and the championship points that go with it. The Dane has claimed four podiums so far this year, including his first win at Oulton Park and is a likely challenger at Snetterton this weekend.

Fortec’s Tom Gamble claimed his first single seater victory at Rockingham, and is shaping up to be the top British contender this year. The reigning Ginetta Junior champion sits third in the standings after the first six races, and was a clear winner from pole position in the first contest at Rockingham.

Another debut winner last time out was Lanan’s Kush Maini. The Indian driver had displayed prodigious pace in pre-season testing and finally cashed in with a dominant victory in Rockingham race two. He’s out for more this weekend.

Others to keep an eye out for include Fortec’s Manuel Maldonado who clinched his first ever victory at the season opening weekend at Oulton Park and was a constant top-five threat at Rockingham, while Double R’s Krish Mahadik has delivered constantly strong results and lies sixth in the standings.

Carlin’s Billy Monger is back once more, and is keen for a podium return after stunning the motorsport community with a third place finish on his racing comeback at Oulton Park. The 19-year-old Brit had the pace at Rockingham but not the luck, and was tipped out of the final race in spectacular style when in a strong position.

Douglas Motorsport’s Jordan Cane returns to the scene of two of his victories last year, and after clinching his first podium of 2018 at Rockingham will look to climb the steps further in Norfolk. His team mate Jamie Chadwick is fresh from competing at the Nurburgring 24 Hours, and she is also hunting victory having stood on the F3 podium already this year and showed strong pace at Rockingham, qualifying just a tenth of a second away from pole position.

Chinese racer Sun Yue Yang sits inside the top-10 for Carlin, with two sixth place finishes so far, while Frenchman Tristan Charpentier has already enjoyed a podium finish for Fortec this year, and has targeted more starting this weekend.

Hillspeed’s Thai driver Sasakorn Chaimongkol has been a model of consistency and took his best result yet at Rockingham with eighth place in the final race, and he’s just ahead of Canadian teammate Ben Hurst in the standings, who also continues to adapt well to F3 machinery after graduating from Formula Ford 1600 in his homeland.

Singaporean Pavan Ravishankar came close to taking his first top-10 finish for Double R at Rockingham, while Arvin Esmaeili too has shown flashes of speed for Douglas Motorsport, but needs an injection of luck to land the result he deserves.

Meanwhile, Hillspeed’s Jusuf Owega delivered an impressive debut weekend at Rockingham, well on the pace in testing and a top-10 qualifier, and could well be one to watch in Norfolk this weekend.

Highlights of all the action will be available to watch on ITV4 next weekend, but the place to be over the next two days is the expansive viewing areas at Snetterton, which will provide a perfect viewpoint of potential F1 stars of the future. The action gets underway with four hour-long testing sessions today (Thursday), followed by four half hour sessions on Friday. Qualifying on Saturday starts at 11.40 before race one at 15.15. Races two and three take place at 10.15 and 14.40 on Sunday, with full updates and live timing available throughout the event on the official BRDC British F3 website.