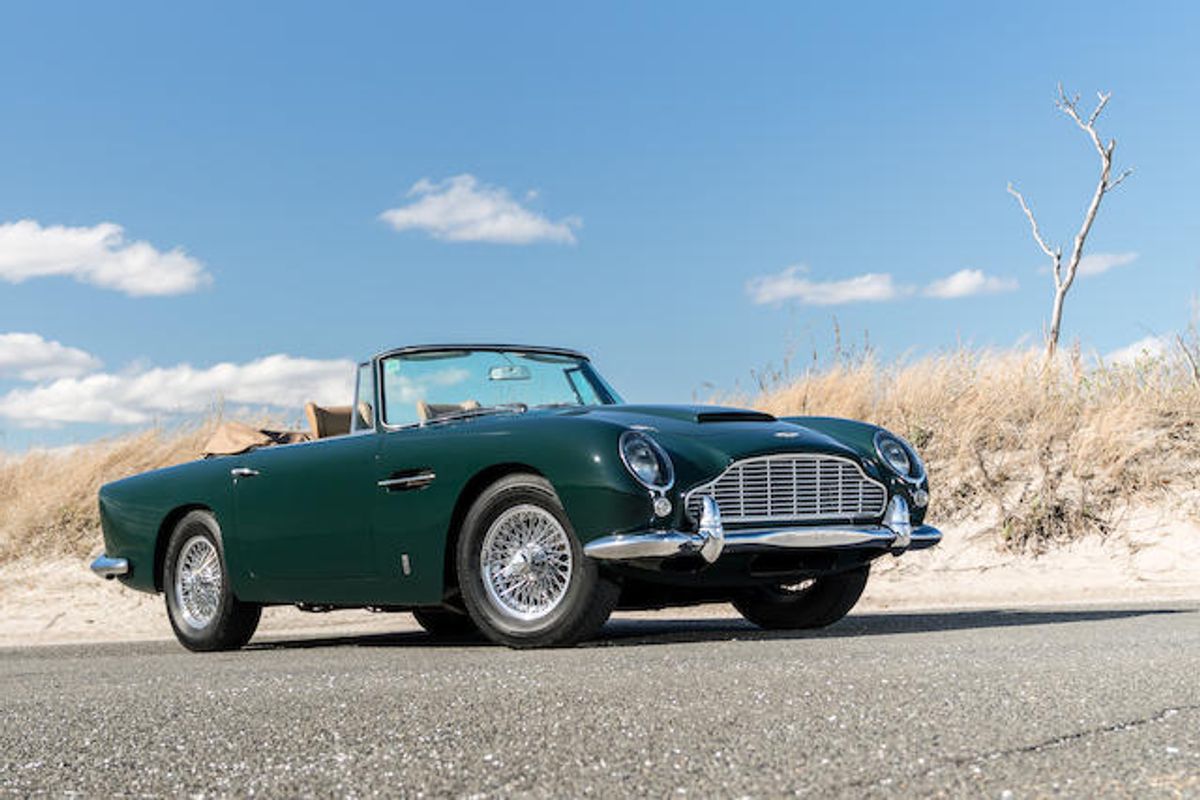 "More and more cars today reach the magical "ton" but those which can do it with the same ease and rapidity of the Aston can be counted on the fingers of one hand. High-speed stability and safety is not cheap to engineer, and with few people to pay the price, production costs are never reduced by the quantity of the work. The DB5 therefore fills a unique corner of the market, a corner at the top end both in the way it performs and the price one pays for the privilege." Autocar, September 18th 1964.

Introduced in 1963, the DB5 was a development of the preceding DB4 that had represented such a giant step forward in Aston Martin's post-war evolution upon its arrival in 1958. Classically proportioned, the DB4's Touring-designed body established an instantly recognizable look that would stand the marque in good stead until 1970. Its engine was still an all-alloy twin-overhead-camshaft 'six' but the old W. O. Bentley-designed 3.0-liter unit had been superseded by a new design by Tadek Marek.

Proven in racing before it entered production in the DB4, the new 3,670cc engine featured 'square' bore and stroke dimensions of 92x92mm and developed its maximum power of 240bhp at 5,500rpm. The David Brown gearbox was a new four-speed all-synchromesh unit. Touring's Superleggera body construction, which employed a lightweight tubular structure to support the aluminum-alloy body panels, was deemed incompatible with the DB2/4-type multi-tubular spaceframe, so engineer Harold Beach drew up an immensely-strong platform-type chassis. Independent front suspension was retained, the DB2/4's trailing links giving way to unequal-length wishbones, while at the rear the DB4 sported a live axle located by a Watts linkage instead of its predecessor's Panhard rod. Five series were built as the model gradually metamorphosed into the DB5. The latter's distinctive cowled headlamps had first appeared on the DB4GT and the newcomer was the same size as the lengthened Series V DB4.

The DB5's 3,995cc engine, first seen in the Lagonda Rapide, produced 282bhp and was mated to a four-speed, overdrive-equipped gearbox, a 'proper' ZF five-speed unit being standardized later. Other improvements included alternator electrics, Girling disc brakes instead of Dunlops, Sundym glass, electric windows and an oil pressure gauge as standard equipment. The DB5 was also offered in convertible form (the 'Volante' name would not be applied to the soft-top Aston until the DB6's arrival) while independent coachbuilder Harold Radford offered a shooting brake conversion.

This rare DB5 Convertible was ordered new by Michael Goth of Straatsburg, New York in November of 1964. Goth, a rising star in the world of sports car racing who would go on to have successful starts in SCCA, Can-Am, Tasman, and Formula 5000, clearly knew what he was doing when he ordered his DB5. Specified in the elegant and classic color scheme of Goodwood Green over Beige hides, there was no hesitation in ordering a raft of options including Normalair air-conditioning, a Bosch Blue Spot radio with power operated aerial, a pair of detachable headrests for both front seats, chrome wheels shod in whitewall tires, a tonneau cover with center zip-in, and a detachable hardtop painted to match the car. A ZF 5-speed manual transmission rounded out the spec. This DB5 would be one of just 39 left-hand drive convertibles to roll out of the Newport Pagnell factory. Factory records indicate the car was originally equipped with engine 400/1788, and the car appeared in the Aston Martin Owner's Club in 1965 and '67 with this motor, but between 1967 and 1971, the engine that currently sits in the car—400/1783—was installed. The original engine, 400/1788, at some point made its way into another U.S. delivered DB5 Coupe, DB5/1797/L. Given that both cars were registered in New York at the time, it was likely a swap performed by the local Aston Martin Lagonda agent.

The Aston was the perfect car with which to romp around the Hudson Valley when Goth wasn't attacking the race track in his Cobra, Lotus 23, McLaren M1A, or Lola T70. By 1970, Goth's racing career had taken him to the Tasman Championship, and thus he was spending more and more time on the other side of the world in New Zealand and Australia. By late 1971, 1520 was for sale at Rollston Motors at 442 East 92nd Street in New York City, from which the current owner purchased the car just before Christmas on December 22nd, 1971.

Only seven years old at the time, the stylish droptop made an excellent daily driver. Used on trips between his Connecticut home and New York City office,the car was driven, enjoyed, and regularly maintained. When winter came, the top was put up and a set of skis were put on the back for a trip or two up to Stowe Mountain in Vermont. Moving part time down to Florida in the early 1990s, the DB5 would be used to make the trip down to Palm Beach on at least one occasion. Sometimes street parked in front of his apartment, he would regularly find complimentary notes (and occasional offers to purchase the car!) stuck under the wiper blade.

Several inches of receipts document the ownership and service history of the DB5 since the current owner's acquisition. Starting with the original Connecticut certificate of title from 1971—filled in by hand by the DMV clerk—meticulous care is recorded in each of the numerous receipts. Service records from the mid-1970s to today document the usual engine, brake, suspension, and transmission work one would expect to be performed. Having been a daily driver for some time, rust repairs were also carried out, all of which are documented both in receipts and photos of the work completed.

Today the car shows well, having received a repaint along with a fresh interior and top about 20 years ago —but never being fully restored. Mechanically, the thick stack of records pertaining to its constant and regular maintenance speak to its operation today, and in a short drive in the car by a Bonhams specialist, it was reported to be a smooth runner that powered through the gears nicely. Still finished in the original scheme of Goodwood Green over Beige hides, the original hardtop was sold many years ago as the owner had practically never used it, and it was occupying loads of garage space. Additionally, while the original air-conditioning compressor accompanies the vehicle, it is not presently installed.

Now after nearly half a century in a single owner's care, it is ready to move onto to its third keeper since leaving the factory floor of Newport Pagnell. Complete with its owner's handbook, jack, copies of its factory build sheet, British Motoring Heritage Trust Certificate, its 47-year-old Connecticut title, reams of service records as well as photos of metal work repairs, one would be hard pressed to find another example that has been so continuously loved and enjoyed. The perfect entrant for any number of desirable motoring events, such as the Copperstate 1000, Going to the Sun Rally, Mountain Mille, Texas 1000, or an overseas rally such as the Holy Land 1000, you are all but assured to enjoy the ride and arrive in style!

James Bond probably would have had a DB5 Convertible...but Q no doubt could only get his hands on a more common Coupe.