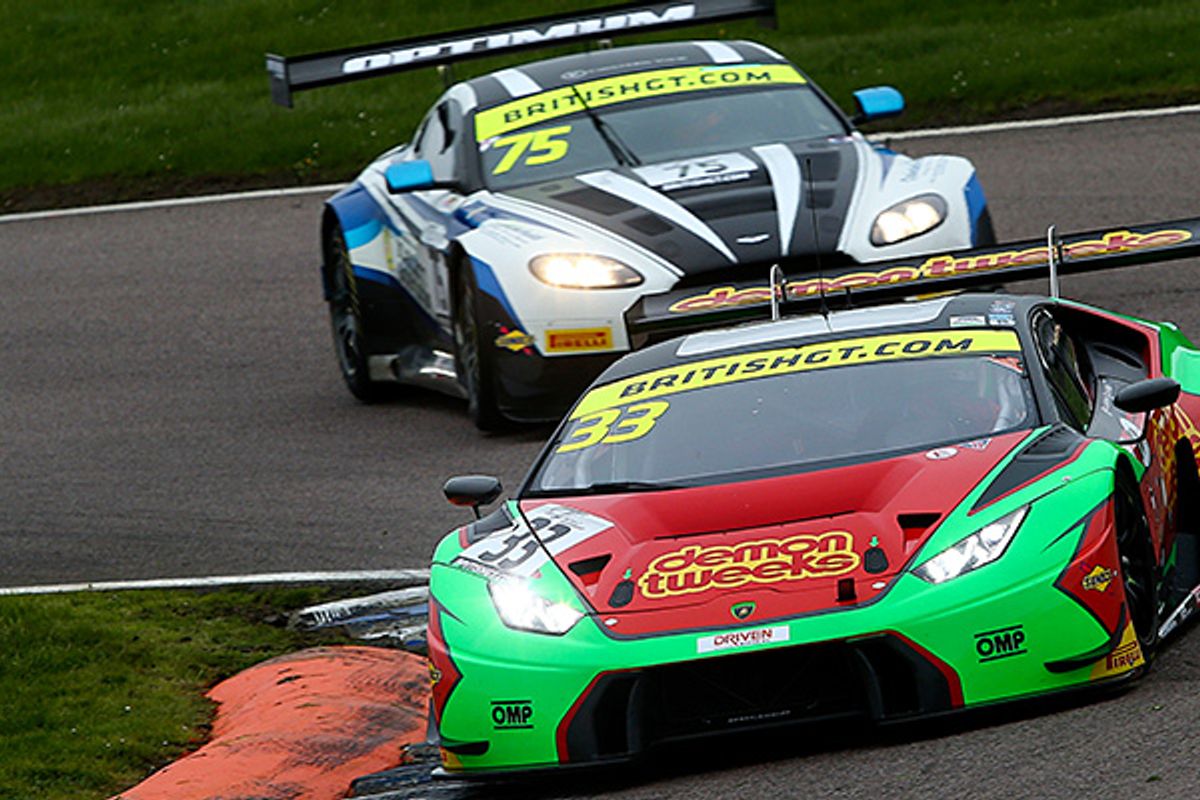 British GT’s sprint format returns at Snetterton this weekend when a grid of 33 supercars tackles two 60-minute races in Norfolk.

The 2.969-mile, 12-turn ‘300’ layout plays host to races four and five of the 2018 campaign, the final time this year that the shorter format will be used before two- and three-hour endurance contests awarding points-and-a-half complete the season.

Few would have predicted Lee Mowle and Yelmer Buurman’s victory last time out at Rockingham after their ERC Sport Mercedes-AMG lined up last on GT3’s grid. That win – the team’s, drivers’ and manufacturer’s first-ever overall triumph in British GT – also helped them assume the championship lead, as well as incur the full 10s pitstop success penalty to be served in Snetterton’s first race.

That should prevent the pair from challenging in Sunday’s opener. But, as their closest rivals Jon Minshaw and Phil Keen proved by overturning the same penalty at Snetterton in 2016, anything is possible. Only a drive-through penalty ended their hopes of achieving the same feat 12 months ago at a circuit where the #33 Lamborghini has won three of the last four races.

Recent history also favours Aston Martin, whose Vantage V12 GT3s have won the other four races staged since 2014. Beechdean AMR’s Andrew Howard, who – along with co-driver Darren Turner – lies just half-a-point behind Minshaw/Keen in third, is responsible for half of them and would surely love to claim a first British GT victory since August 2015 when he and Jonny Adam triumphed at Snetterton in their championship-winning season together. Two podiums from this year’s first three races suggest #99 will be in the hunt.

The same goes for Adam and Optimum Motorsport co-driver Flick Haigh who have qualified on the front row for all three races held so far. Victory first time out at Oulton Park remains their only podium, but with no pitstop penalty to serve the pair look set to renew their rivalry with Keen and Minshaw. That’s especially true given the Scot’s recent Snetterton record, which features three victories in four years.

Meanwhile, the obvious pace of TF Sport’s two crews – 2017 Snetterton winner Derek Johnston and Marco Sorensen, and Mark Farmer and Nicki Thiim – has only resulted in one podium apiece so far this year. But that should all change at Snetterton where the team finished one-three in 2017.

Elsewhere, Graham Davidson’s exceptional opening stint at Rockingham marked the Scot and Jetstream Motorsport out as future race winners, while only a clutch issue ended Sam De Haan and Jonny Cocker’s genuine podium hopes in the second of Barwell’s Lamborghinis.

GT4: HHC OUT TO EXTEND ADVANTAGE

It’s little surprise that two of the three crews to have scored points in every race this season occupy first and second in the standings. Nor is it a shock to see HHC’s #55 Ginetta top of the table, just as it was this time last season when Will Tregurtha and Stuart Middleton headed to Snetterton fresh from victory at Rockingham.

However, the true test of their incumbents Patrik Matthiesen and Callum Pointon is yet to come. 12 months ago Tregurtha and Middleton overturned the full 10s success penalty to win Snetterton’s opening race. And while that alone didn’t decide the championship in their favour, it did set them up for an ultimately successful title tilt. There’s no doubt Matthiesen and Pointon are now the crew to beat following their impressive display at Rockingham, but do they have what it takes to cement their advantage this weekend?

Tolman Motorsport’s Michael O’Brien and Charlie Fagg will be doing their utmost to ensure they don’t. Consistency sees them occupy second in the standings, 12.5 points behind the Ginetta at the start of the weekend but contesting Race 1 handicap-free. A McLaren 570S won Snetterton’s second race last season after Tolman’s Pro/Am entry – which had qualified on pole – had its legitimate victory chances ended by unfortunate Safety Car timing.

Non-scoring at Rockingham saw Track-Club’s erstwhile championship leaders Adam Balon and Ben Barnicoat slip to third in the standings ahead of Century Motorsport’s highest-placed BMW driven by Jack Mitchell and Aleksander Schjerpen. But it was the team’s second M4, in the hands of Ben Green and Ben Tuck, that looked especially racy during the opening stint at Rockingham.

The same can be said of both UltraTek Racing Team RJN Nissans, which comfortably enjoyed their best-ever collective result last time out. Second and fourth on the road translated into a Pro/Am one-two for Stephen Johansen and Jesse Anttila, and Kelvin Fletcher and Martin Plowman. And with the latter crew finishing highest of those without a pitstop success penalty this weekend, few would bet against the 370Z from producing another podium performance.

Like UltraTek, Academy Motorsport enjoyed an impressive outing at Rockingham after Will Moore and Matt Nicoll-Jones came through to finish third overall. But with the resulting pitstop penalty it could be the team’s second, more youthful Aston Martin crew that carries the fight in Race 1. At a combined age of just 35 Tom Wood and Jan Jonck are one of just three pairings after Matthiesen/Pointon and Fagg/O’Brien to maintain a 100% points scoring record this season.

Meanwhile, the vagaries of British GT’s points system see the crew in 12th place overall leading the Pro/Am class. Reigning champions Graham Johnson and Mike Robinson have a knack of scoring when it matters and 2018 has been no different with the Balfe Motorsport McLaren just one point ahead of Johansen and Anttila.

Team Parker’s Nick Jones and Scott Malvern, plus Fletcher/Plowman are another 1.5 points behind, while Balon and Barnicoat complete a top-five separated by 6.5.

But remember: nothing beats actually being there! Discounted tickets can still be purchased in advance until midday Thursday, while children aged 12 and under can attend for free all weekend. Visit www.snetterton.co.uk for details.

Jonathan Wells, Pirelli UK motorsport manager: “The modern Snetterton circuit provides a varied test for tyres, with its technical infield section as well as the higher-speed corners of the classic layout. However, with a smooth surface, wear and degradation rates are usually quite low, even if fairly high temperatures are anticipated this weekend. This should help to produce some exciting action in the two one-hour sprint races.”