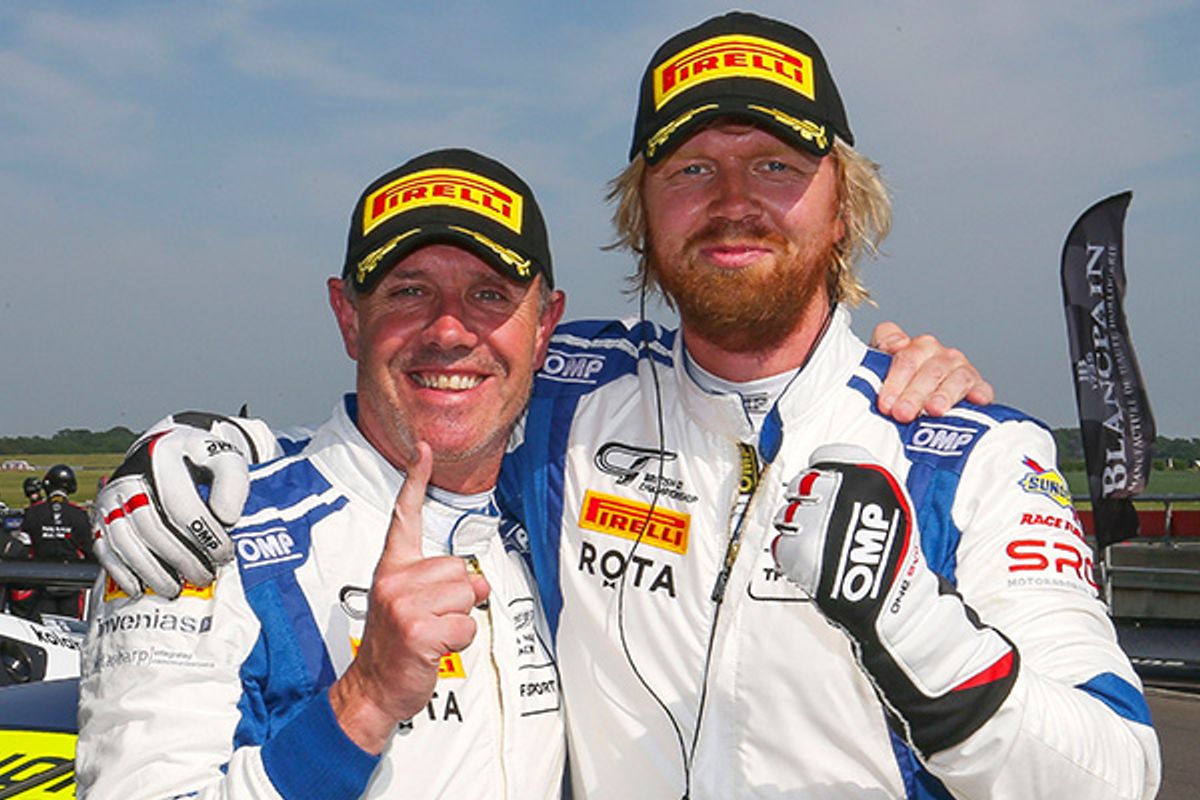 TF Sport made good on its practice pace by also topping both 10-minute qualifying sessions at Snetterton, although Farmer and Thiim’s respective poles couldn’t have been any different.
Farmer was pushed all the way by Jetstream Motorsport’s Graham Davidson and Barwell’s Jon Minshaw, who both finished within a tenth of the #11 Aston Martin after all three drivers hit the front early on. However, Farmer was never headed en route to his second pole position at Snetterton in three years.
Davidson, who missed out on pole by just 0.048s, at least made it an all-Aston Martin front row ahead of Minshaw and reigning champion Rick Parfitt Jnr, who also cemented his and Team Parker’s place in the top-four early on.
Andrew Howard’s Beechdean AMR V12 Vantage heads up row three alongside Jordan Witt’s RJN Motorsport Nissan, which got the better of Sam De Haan’s Barwell Lamborghini late in the session. Ian Loggie completed the top-eight aboard the second of Team Parker’s Bentleys.
The second GT3 session was settled almost before it began thanks to Thiim, whose initial 1m47.385s never came under any serious threat.
Championship leader Yelmer Buurman went closest to beating the Dane. But when the ERC Sport driver’s fastest time was deleted for a track limits violation, the difference between first and second – inherited by Barwell’s Phil Keen – extended to 0.531s.
Jetstream’s Maxime Martin was third but starts tomorrow’s second race from the back of GT3’s grid after failing to complete the minimum number of required laps. Marco Sorensen therefore heads up row two in the second of TF Sport’s Aston Martins, while Darren Turner’s Beechdean AMR V12 Vantage starts fourth.
The two Jonnys – Barwell’s Cocker and Optimum’s Adam – also moved up to fifth and sixth ahead of Team Parker’s Callum Macleod and Buurman.

GT4 served up two excellent qualifying sessions, albeit for different reasons. While Ben Tuck beat his nearest rivals by half-a-second, the subsequent session saw Matt Nicoll-Jones lead a top-seven separated by just 0.4s.
Tuck began the first session as he intended to finish it by immediately leaping to the top of the times and staying there with a subsequently faster time. His best of 1m58.438s proved far too hot for a chasing pack headed by championship leader Callum Pointon whose late improvement aboard HHC’s #55 Ginetta was still 0.552s slower than the BMW ahead.
Academy Motorsport’s Will Moore had been Tuck’s nearest rival for much of the first session but ended up two tenths behind Pointon in the final reckoning. He was a similar margin ahead of Tom Canning, who posted Steller Motorsport and Toyota’s best qualifying performance of the year in fourth.
Tom Wood was next up in the second of Academy’s Aston Martins, while Lewis Proctor relieved Tolman Motorsport team-mate Michael O’Brien of sixth after the chequered flag had flown. Finlay Hutchison’s Equipe Verschuur McLaren completed the first eight positions ahead of top Pro/Am performer, Adam Balon.
The all-Pro session produced an incredibly close result, with 0.066s separating first from second and just 0.4s covering a top-seven comprising six different manufacturers.
The die was cast early when Nicoll-Jones’s best of 1m57.854s edged out Century’s BMW driven by Jack Mitchell. Academy’s second Aston Martin took a little longer to join the party but well and truly arrived when Jan Jonck slotted into third after lapping just 0.1s slower than his team principal.
That pushed Team Parker Racing’s Scott Malvern down to fourth, the Mercedes-AMG ending up just 0.033s behind Jonck but fastest of the Pro/Am contingent by 0.117s from Tolman’s Joe Osborne who starts right behind in fifth.
Sennan Fielding again hinted at the Steller Motorsport Toyota’s potential by qualifying sixth, while Jesse Anttila made up for UltraTek Racing Team RJN missing FP1 by qualifying his Nissan seventh. Century’s second BMW driven by Ben Green completed the top-eight..

DRIVER QUOTES
Mark Farmer, #11 TF Sport Aston Martin V12 Vantage GT3: “We were very strong here in testing a couple of weeks ago but when we arrived this morning it felt very different. We struggled for set-up and the car didn’t feel as sharp as it had. Snetterton’s renowned for being highly variable so we made some changes just before qualifying and it worked: the car was on rails and all I had to do was drive it! We’re really chuffed with the result. It’s clear from qualifying that the field is very close so nothing’s a given – it should be a great scrap at the front tomorrow.”

Nicki Thiim, #11 TF Sport Aston Martin V12 Vantage GT3: “This is my second weekend running in the UK and the sun has shone on both: incredible! It’s great being back at Snetterton – I was last here four years ago. This one’s for the boys because Rockingham was so tough on us as a team. We need to make up some points and this is a good start: we were in the top-two in both practice sessions so hopefully we can stay there tomorrow.”
Ben Tuck, Century Motorsport BMW M4 GT4: “That lap felt really good. We struggled a little bit in practice but we knew where we were with the tyres so just worked on the set-up knowing it would come together after fitting fresh rubber. We’re getting there: the first two rounds were a struggle but it’s a new car. BMW and Century have worked really hard on the package, and especially for this weekend, as we just saw. If this is the sort of form we can expect then I can’t wait to see what the rest of the year holds.”

Matt Nicoll-Jones, Academy Motorsport Aston Martin V8 Vantage GT4: “She’s a good old girl! We’ve spent so much time with the Astons over the last three or four years that we know our way around them and are getting absolutely everything out of the package. But, to be honest, we didn’t see this coming. I’m really chuffed with the lap I posted and know there wasn’t much left in it. Jack Mitchell in the BMW behind us is a really quick driver so a little slip and we wouldn’t have set pole. I’m also really pleased for the second car, which is P3. Plus, Will [Moore] and Tom [Canning] are right up there on the Race 1 grid. Everyone’s doing a cracking job.”