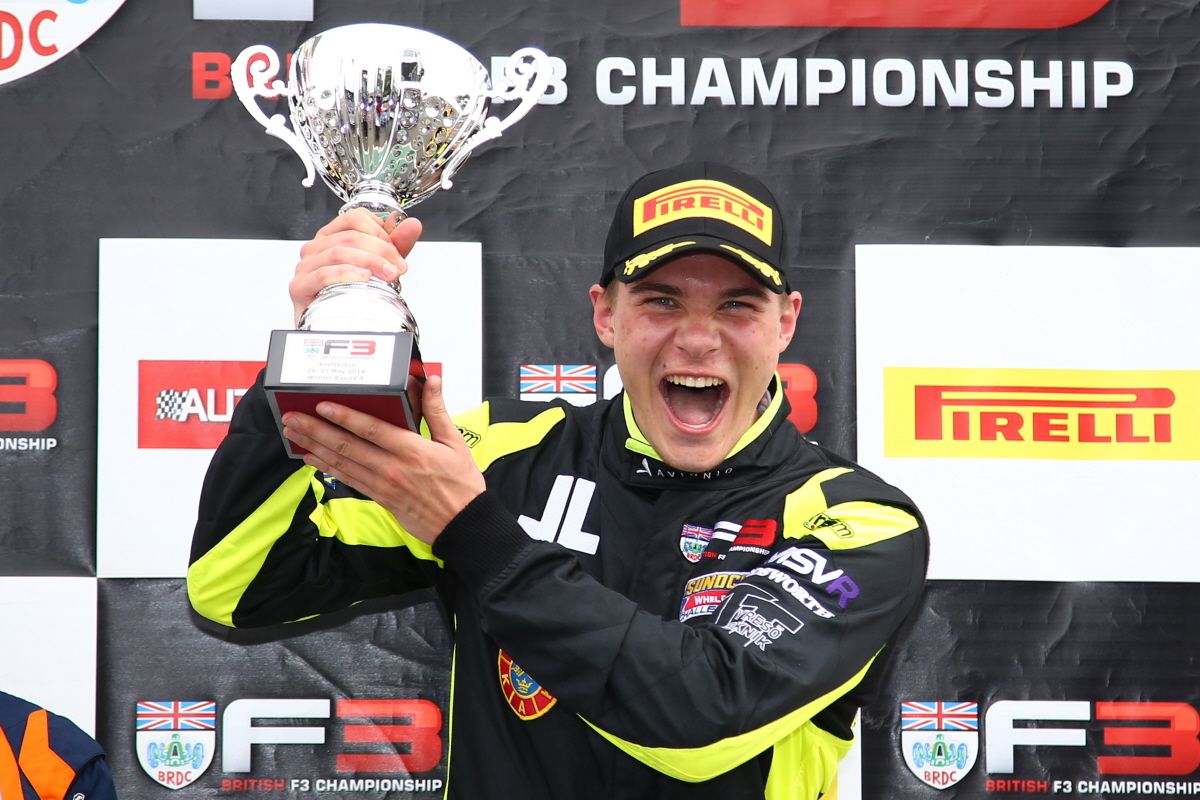 Swedish single-seater star Linus Lundqvist claimed his and Double R Racing’s third victory of the BRDC British Formula 3 Championship season at Snetterton 300 Circuit on Sunday, 27th May, to increase his lead at the top of the driver standings to 30 points.

After racing to third place in round seven on Saturday, 26th May, Lundqvist just missed out on another podium in round eight on Sunday morning in the ‘reverse grid’ race before converting pole position for round nine into another win. Notably, he has won at each circuit visited thus far in 2018 and also scooped the ‘Sunoco Fastest Driver of the Weekend’ accolade.

Double R team-mate Krishnaraaj Mahadik claimed his first podium of the year with an excellent second place finish in race two and ended the event an improved fifth in the standings. There was also success for Pavan Ravishankar with a season-best seventh place in round eight.

“We’ve had another very strong weekend with Linus and it’s obviously great to increase the championship lead”, said delighted team principal Anthony Hieatt, “He definitely had the potential and pace to be on the podium in all three races, but a win, a third and a fourth place is fantastic.

“Krish did a great job in race two to finish in second, hopefully the first of many podiums for him this season, and Pavan came away from Snetterton with his best result yet so, overall, it’s been a very strong weekend for Double R.”

Lundqvist, who set the pace in both pre-event test days, just missed out on pole position during round seven qualifying with a time of 1m43.769 seconds placing him second on the race one grid. Ravishankar and Mahadik, meanwhile, ended the run 13th and 14th respectively to share row seven.

The outcome of Saturday afternoon’s encounter was pretty much decided at the beginning, pole-starter Nicolai Kjaergaard holding the lead off the line and Lundqvist remaining second on the run into the first corner. With the gap between the two title rivals never more than 1.2 seconds, and as low as 0.9 seconds at times, there was nothing to split them for the bulk of the contest.

On the penultimate lap, though, an unfortunate moment for Lundqvist at Hamilton meant he lost the rear of the car and so slipped to third position where he stayed to the flag on lap 10. Importantly, though, the Swede did take the fastest lap with a time of 1m44.523 seconds.

Mahadik made progress on his starting slot to finish inside the top 10, the Indian racer gaining three places to climb into 11th position on lap one and then breaking into 10th on the third tour. Under heavy pressure during the second half of the encounter, he remained unruffled to the finish.

Ravishankar, initially holding his grid position, was edged back to 16th over the course of the first few laps but was able to mount a fightback during the second half of the race and reclaimed two places late on to finish in 14th position.

Round eight on Sunday morning, the ‘reverse grid’ contest, began with Ravishankar in fourth, Mahadik in eighth place and Lundqvist with a huge amount of work to do from 15th spot. On the opening lap, Mahadik starred by gaining no fewer than five places to slice his way into the top three while Ravishankar slipped to eighth and Lundqvist impressively climbed five spots into the top 10.

Mahadik wasn’t finished there either, moving up into second place on lap two and running just 1.8 seconds shy of race leader Manuel Maldonado. Edging ever closer lap after lap, into the 10th and final tour he got to within 0.4 seconds of his rival but ultimately had to settle for second position.

Lundqvist just missed out on capping a very impressive drive through the order with silverware, climbing through into the top four on the penultimate lap and taking the chequered flag only half a second shy of the podium. Ravishankar ran as high as fifth before the midway point of the race and although edged back to seventh, it still marked his best result of 2018.

For round nine later in the day Lundqvist lined-up on pole position, as a result of having set the fastest race lap of the weekend to that point, with Ravishankar 13th on the grid and Mahadik two places further back.

Making a clean start from the front of the grid, Lundqvist stayed ahead of title rival Kjaergaard into the first corner and despite intense pressure throughout the 10 laps the Double R ace didn’t put a wheel wrong on his way to a richly deserved win.

With only 0.1 seconds between the pair at the end of lap one, Lundqvist did manage to edge one second clear by the end of lap three but during the second half of the contest he had to defend as Kjaergaard redoubled his efforts. Lundqvist, though, had the measure of his rival for a great victory.

India’s Mahadik moved up into 11th position on a strong first lap, getting ahead of Ravishankar in the process, and after the Singaporean climbed into the top 12 on lap two a fantastic inter-team battle raged over the next few laps. Mahadik maintained 11th place, though, to the flag on lap 10 while Ravishankar was edged back to 13th position a couple of laps from the finish.

Silverstone Grand Prix Circuit in Northamptonshire is the next stop on the British F3 calendar with rounds 10, 11 and 12 taking place over the weekend 9th/10th June. Double R’s British F4 squad will also be in action that weekend at Oulton Park in Cheshire for the fourth event of its 2018 season.