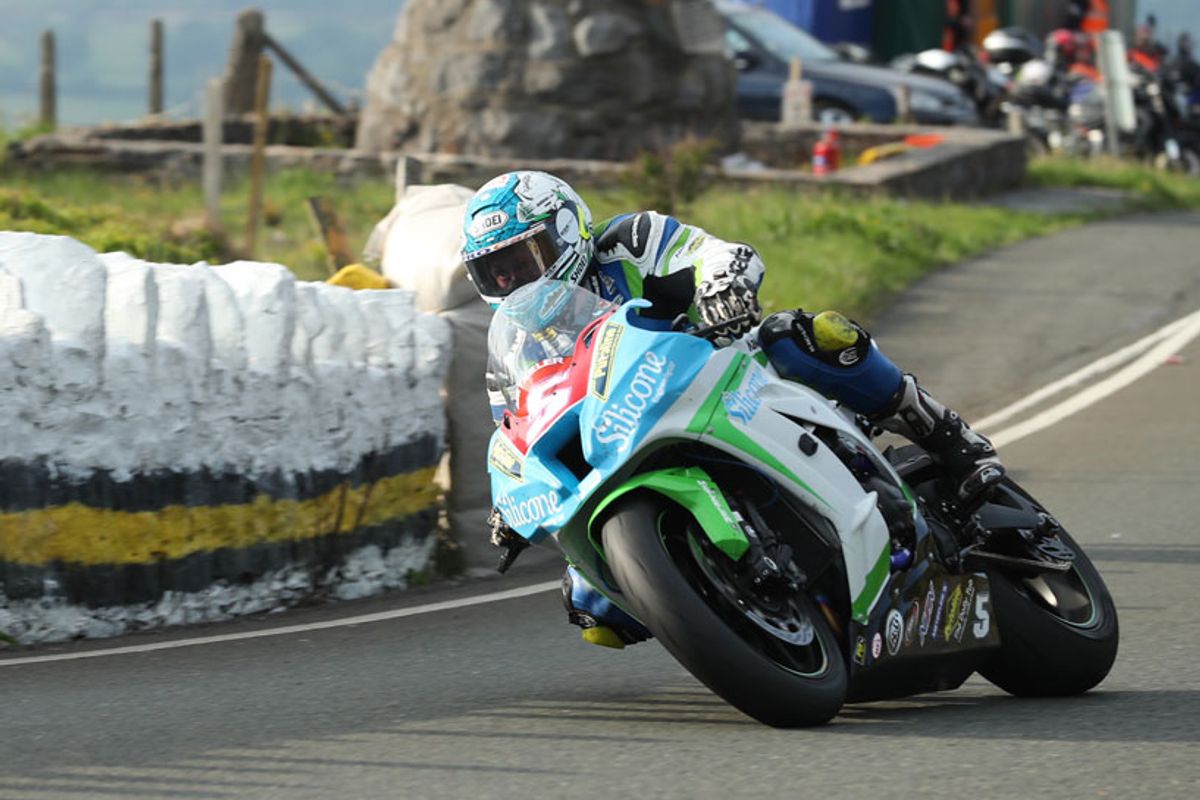 Dean Harrison set the 2018 Isle of Man TT Races, fuelled by Monster Energy, alight on Tuesday evening with a stunning lap of 133.462mph, which unofficially broke the Superbike lap record and also saw him become the second rider to lap the Mountain Course in less than 17 minutes.

The Silicone Engineering Kawasaki rider laid down a marker from the outset with an opening lap of 133.140mph, the fastest ever standing start lap – albeit unofficially – before increasing his pace second time around. The Bradford rider’s quickest lap prior to tonight was 132.019mph, set in last year’s PokerStars Senior TT race.

With the sun continuing to shine on the island, conditions were again excellent all around the Mountain Course and after a slight delay due to oil being cleared at Ballig Bridge, the session got underway at 6.23pm.

It soon became clear that Harrison was setting a fierce pace throughout the 37.73-mile lap and although Dunlop and Hickman were first to cross the line at 132.319mph and 131.871mph respectively, he jumped to the top of the timesheets with his aforementioned opening lap of 133.140mph.

Manxman Kneen was flying too and his lap of 132.258 was almost 2mph up on his best lap set in last year’s RL360 Superstock race while Hickman was again impressing at 132.169mph. David Johnson (Gulf BMW) improved to 129.360mph with Josh Brookes also upping his speed to 128.590mph which was just quicker than Phil Crowe’s impressive lap of 128.472mph.

As the session wore on, the lap speeds dipped slightly,  largely due to heavy traffic all around the course and the setting sun but Hickman and Harrison both managed 130mph+ laps on their Superstock bikes - Hickman the quicker with his second lap of 130.619mph. Kneen slotted into third ahead of Lee Johnston, Cummins and Hillier with Hickman’s third lap coming to a halt with a retirement at Crosby.

Harrison’s night ended on a low note when he pulled off the course at Ballacraine whileLintin had a slow speed tip-off at Governor’s Bridge on a Superbike lap although he got back out on his Lightweight machine where he went quickest at 119.191mph.

Meanwhile, the newcomers again improved over the course of the evening with Davey Todd quickest on his 1000cc Suzuki at 121.97mph although Adam Lyon’s lap of 121.537mph was equally impressive as it came on his 600cc Yamaha. David Jackson, who lost all of Saturday’s session due to breaking down at Ballig, was also making up for lost time on 118.93mph.

Not to be outdone by the solos, the Formula Two Sidecars were also setting a formidable pace and John Holden/Lee Cain scorched round on their opening lap at 115.732mph, which was only three seconds outside their personal best. The Birchalls were second quickest at 114.875mph with Alan Founds/Jake Lowther (112.602) slotting into third ahead of Dave Molyneux/Dan Sayle (111.122).

Peter Founds/Jevan Walmsley (110.866) and Lewis Blackstock/Patrick Rosney (110.180) were the other two crews to break the 110mph barrier on their opening lap whilst a good lap came from newcomers Michael Jackson/Harry Payne at 101.714mph.

Second time around, the Birchalls lapped at 115.145mph which kept them in second place with the Founds brothers in third and fourth, Alan the quicker on 113.037mph from Peter at 112.324mph. Meanwhile, Tony Baker/Fiona Baker-Holden got as close to breaking the 110mph barrier as possible with a second lap of 109.999mph whilst Jackson/Payne improved further still to 102.983mph.

Wednesday’s session is due to get underway at 18.20 to 19.40 with Superbike/ Superstock / Supersport/ Newcomers (except Lightweight) with the Sidecars out at 19.45 to 20.40 and the TT Zero bikes getting their first qualifying laps in at 20.40.