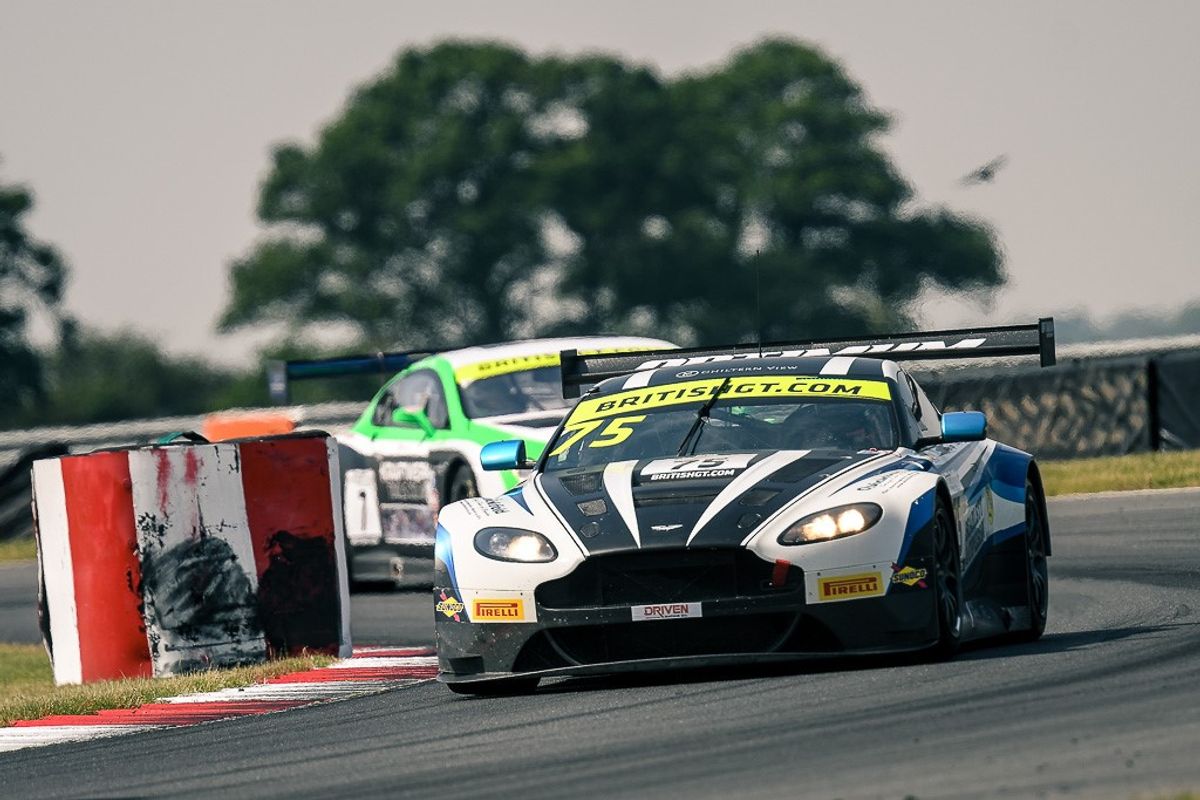 Optimum Motorsport showed great pace again as the British GT Championship travelled to Snetterton for rounds four and five of the campaign and left the Norfolk circuit having taken the chequered flag in fourth position in both races.

Qualifying however proved to be disappointing on Saturday, with Flick Haigh and Jonny Adam qualifying the #75 Aston Martin Vantage GT3 ninth and seventh respectively. Analysis pointed to a tightening gearbox and this was duly swapped out by the team ahead of Sunday’s double header.

The first race saw Flick get a good getaway from the rolling start to move seventh by the end of the opening lap. At the ten-minute mark, she passed the #116 ERC Sport entry to move sixth before a safety car was deployed, closing up the field. The driver changes began with Flick pitting from fifth and fast work from the team saw Jonny exit the pits in fourth, a position he held to the end of the race.

The Stewards however deemed that lap two contact between Flick and the #99 Aston Martin warranted a 30 second time penalty. This dropped the team from fourth to ninth in the provisional results, something Optimum Motorsport are appealing.

The second race saw Jonny line up sixth after a rival received a qualifying penalty. It was a tricky stint for the Le Mans race winner as he ran in seventh position before handing over to Flick mid-distance. She was immediately on the move, lapping significantly quicker than her rivals ahead.

She soon dispatched the #116 Mercedes and closed in on the #33 Lamborghini of Jon Minshaw. An audacious pass around the outside into turn one saw her claim fourth position and she set about closing the gap to the #11 Aston Martin of Mark Farmer ahead.

Flick took the chequered flag fourth having closed the gap to the race winner from 20 seconds to just seven after another impressive performance.

Pending appeal, Optimum Motorsport are sixth in the teams’ championship and fifth in the drivers’ standings as they prepare for the next round at Silverstone as well as their second race of the season in GT Open.

“Two fourth places from the weekend is a great haul of points. Credit to Flick, she had some cars to negotiate so it was a phenomenal stint from her. We’re trying to make amends for the decision from race one. So fingers crossed we can regain the fourth position – the correct results as we see it – to make it two strong results from Snetterton. As a whole, we seem to be missing something with Jonny’s out-and-out pace, while Flick remains exceptional in terms of her pace.

“We just need to try and get on top of this half second we’re missing with Jonny so we can be fighting for victory at Silverstone. We’re leaving no stone unturned as we don’t feel we are where we should be. We’re under no illusion but we need to be standing on the top step of the podium again.”

“It was a challenging weekend for us from the start really, we struggled in qualifying which made both races a damage limitation exercise. We managed two strong finishes and much needed points. So, it’s onwards and upwards to Silverstone.”

“Race one was mixed and we don’t know what’s going to happen with our appeal. She was in the right situation and she got hit herself. But on the road, we finished fourth after a troubled qualifying session, so that is good. Race 2, another fourth and haul of points. We seem to be close in the championship. There are five teams all very close in terms of points. We need to tune the car a bit for Silverstone, but we’re looking forward to it.”