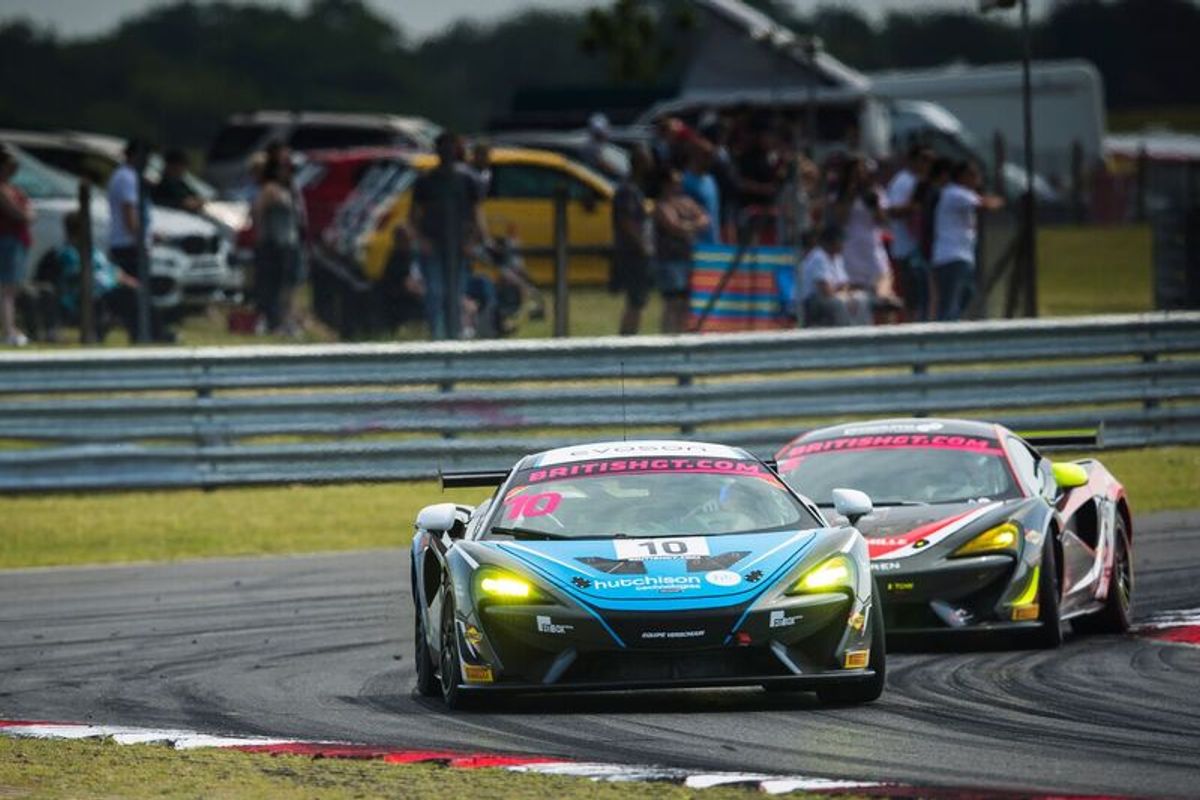 AS McLAREN 570S GT4 SCORES WINS AND PODIUMS AT SNETTERTON

Joe Osborne’s first win as a McLaren Automotive Factory Driver was the headline in what turned into one of the most successful weekends in McLaren’s British GT Championship history, the 570S GT4 scoring both class wins and podiums at Snetterton.

In the first race on Sunday morning, Osborne led home a one-two finish for customer Tolman Motorsport and the McLaren 570S GT4. Osborne's car, which he shares with David Pattison, started the race sixteenth but quickly climbed the order to tenth before the safety car was called into action just a handful of minutes before the pit window opened.

With the field bunched up, and the opportunity to pit coming under safety car, almost the entire field came in including Pattison, who handed over to Osborne.

When the green flags came out to get the second half of the race underway, Osborne found himself up to second thanks to quick pit work from the team. That allowed him to put immediate pressure on the car ahead, before diving up the inside at the Agostini hairpin with 22 minutes remaining to take the class lead.

From there, he drove away from the field and managed the gap, finishing the race 6.4 seconds ahead of the chasing pack.

Behind, McLaren Driver Development Programme (DDP) driver Charlie Fagg was also on the move in the second half of the race, and climbed from fourth after taking over from fellow DDP Michael O'Brien, to second in the #4 Tolman example, winning the GT4 Silver class in the process.

Further back, McLaren Factory Driver Ben Barnicoat also finished high up the order in customer team Track-Club's 570S GT4, ending up fifth. Making it five 570S GT4s in the top 10, the #10 Equipe Verschuur 570S GT4 crossed the line seventh, ahead of the #4 Tolman car in eighth.

The McLaren 570S GT4's highly successful weekend then continued in the afternoon, with another set of silverware being handed out to customer teams in the second race of the meeting on the 2.9-mile Norfolk-based circuit.

After Joe Osborne stole the show in race one driving Tolman Motorsport's #56 570S GT4 to victory, it was the sister #5 Tolman car of DDP drivers Lewis Proctor and Jordan Albert who shone in the second encounter.

The duo started the race ninth on the grid, and with Albert at the wheel, were in contention for a podium spot after the frantic opening laps, climbing to sixth before the round of stops at the halfway mark. Proctor then took over, and emerged third when the runners were back in sync.

With time winding down, Proctor then muscled his way past the car ahead to take second, and then the class lead shortly after with 15 minutes remaining. It looked as if the he would be able to make it a pair of wins to Tolman, but on the final lap lost the class lead through traffic, crossing the line second.

Behind, Balfe Motorsport's #501 car came home fourth overall in GT4, and first in the GT4 Pro-Am class, Graham Johnson and Mike Robinson putting their race one DNF behind them, and driving through the field in the final race of the weekend to boost their championship chances.

Osborne and Pattison, meanwhile, also looked in contention for the GT4 class win, Osborne starting the race and building a healthy lead before the stops. Pattison emerged from pit lane leading the class still, but his progress was halted in what turned out to be a hotly-contested frenzied second half to the race.

In the end, he finished the race seventh, but with another crucial points finish, catapulted himself and Osbourne into the lead of the GT4 Pro-Am championship standings. Right behind, the sister #4 car of Development Drivers Michael O'Brien and Charlie Fagg also secured valuable points with a sixth-place finish, and stayed second in the overall GT4 Drivers’ Championship standings after five races as a result.

The next round of the 2018 British GT Championship is annual 'Blue Riband' 500-mile event at Silverstone, set to be held next month on June 9-10.

Dan Walmsley, Head of Motorsport at McLaren Automotive Ltd:, said: “We’re delighted with the performances from Tolman Motorsport and Balfe Motorsport at Snetterton, especially to take both Pro-Am victories which underlines the usability of the 570S GT4 for the amateur racers.

“Joe Osborne did an excellent job and reinforced our decision to bring him on as a McLaren Factory Driver. His first win as part of the McLaren family sets himself up for a championship challenge.

“The focus for us all is now on the Silverstone 500, which will be a stern test for the cars entered but we’re confident that the 570S GT4 will once again be a frontrunner. It’s vital that we keep our customer teams and drivers in the hunt for title wins in the second half of  the season.”